Destroyer of the Gods: Early Christian Distinctiveness in the Roman World 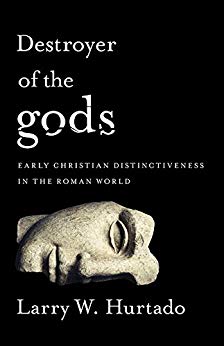 In 1996 sociologist and professor Rodney Stark burst onto the public scene with the publication of his now iconic book The Rise of Christianity. Using principles of modern social theory, Stark projected these back into the early centuries of the Christian era in order to explain how a tiny movement of Messianic Jews who worshipped Jesus of Nazareth could, over the course of three centuries, grow at such an unprecedented rate that they numerically took over much of the Roman Empire. Stark supplemented his sociological approach with solid historical research and gave due credit to the theological premises and moral demands of Christianity as prominent reasons for its breathtaking expansion. In Stark’s view, Christians lived so differently from the people around them that, as the decades rolled on, they increasingly attracted new adherents. Thus, by 300 A.D. they made up at least ten percent of the population of the Empire and were visible in every part of the culture.

Stark’s work initially drew heated responses from those in history departments far and wide, not least because he was seen to be intruding on the sacrosanct academic territory of those who love Clio.  Moreover, some of his views raised serious questions about the spread of the early church, not least his argument that it appealed primarily to the middle and upper echelons of Roman society. But as time has gone on, his perspective has gained general acceptance among scholars most probably because it makes sense of a great many things about the surprising rise of Christianity in the ancient world.

Now, noted biblical scholar Larry Hurtado has given us Destroyer of the Gods, a truly significant book that not only reinforces much of what Stark argued for but moves beyond it in some genuinely provocative ways. The subtitle to the book reflects the essence of Hurtado’s thesis: Early Christian Distinctiveness in the Roman World. Following an introduction, the author uses five chapters and a conclusion to argue that Christians were notoriously different from the culture in which they lived and that, over time, this led to their numerical growth and increasing social impact. And, yes, notorious is the exact, right adjective to describe members of the early church. As Hurtado, professor emeritus of New Testament Language, Literature and Theology in the school of Divinity at the University of Edinburgh, makes clear, Roman writers and public figures such as Tacitus, Suetonius, Pliny, Galen, and Celsus all viciously denounced the first Christians because of their distinctive beliefs, behaviors, and practices. For these Romans, the most repellent aspect of Christianity was its insistence on rejecting the Greco-Roman pantheon of gods and worshipping only Jesus. Of course, the Jews had been given a special allowance by Rome to be monotheistic but they were perceived as ethnically unique. What made early Christianity so distasteful to Roman elites was its trans-ethnic makeup and cultural diversity. Anyone could join the church so long as they professed faith in Christ alone, rejected pagan religion and lived according to the demands of their Savior. As Hurtado argues, such an approach to “religion” was revolutionary in the ancient world where people often worshipped a pantheon of deities. Consequently, Christianity began a slowly unwinding process of ancient Roman religion by destroying its spiritual and cultural foundation based on loyalty to the gods.

In many ways this whole process of eradicating paganism was rooted in the Christian emphasis on finding one’s personal identity “in Christ.” As noted above, this only required a whole-hearted commitment of faith in Jesus as the one, true God and a willingness to live as He commanded. One’s ethnicity, socio-economic status, gender, or geographical setting were irrelevant. What mattered was one’s new inclusion in the church, a group which clearly marked itself off from the society around it. As Hurtado notes, many historians of ancient religion have sought to understand what impact pagan civilization made on the early church.  What he argues, and rightly so, is how the first Christians began to impact their civilization because they identified themselves first and foremost as the followers of Jesus. Thus they could refuse to honor the gods upon which the Romans based their political authority and yet, at the same time, live as good citizens who paid their taxes and prayed for the Emperor (see Romans 13, I Timothy 2, I Peter 2 for apostolic instructions along these lines).

Moreover, to locate one’s identity in Christ required a new way of life, especially in relationships. The old pagan “double-standard” of sexual fidelity for women and sexual license for men was eradicated. Christian men were to be sexually pure and love their wives as Christ loved the church. Abortion and infanticide were anathema to Christians as was homosexual practice, especially with children. This latter point needs to be taken seriously by some contemporary Christians who practice hermeneutical gymnastics with the Bible in order to justify practices and lifestyles that the early church found grossly immoral. In that church, broadly speaking, moral standards were high and its members were expected to live up to them. No easy discipleship there!

While not intentional, most of Hurtado’s argument in chapters 1–3 and 5 reinforces the “Starkian hypothesis” as to why Christianity took over the Empire. Where Hurtado moves way beyond Stark and numerous other historians of early Christianity is his emphasis in chapter 4 on the “bookishness” of the new faith. Those of us in the Protestant tradition take Scripture for granted as our spiritual authority but the enormous emphasis placed on apostolic and other Christian texts by the early church was truly astounding in the ancient world. In an irenic manner, Hurtado clarifies what he means here.

By calling early Christianity "bookish," I simply assert that reading, writing, copying and dissemination of texts had a major place—indeed, a prominence—in early Christianity that, except for ancient Jewish circles, was unusual for religious groups of the Roman era (pp. 105-106).

Actually, this quote is something of an understatement on the author’s part. As he statistically demonstrates, Christian writings vastly outnumbered pagan texts in both length and number. For example, between the preserved letters of Seneca and Cicero, the longest single letter is 4,134 words whereas Paul wrote several letters longer than this: Romans (7,101 words), 1 Corinthians (6,807 words), and 2 Corinthians (4,448 words). And when all the extra-biblical writings are added to the canon of the New Testament, it becomes clear that “early Christianity was phenomenally prolific and varied in literary output” (p. 119). This has some important implications for mission and praxis in contemporary Evangelicalism. Traditionally we have prided ourselves on being people of the Book, meaning the Bible. But within our ranks there is a movement afoot to negate the text in order to emphasize the Resurrection of Christ as the foundation for mission to contemporary seekers and skeptics. I appreciate the heart of this contextualized approach to outreach but, like the attempt to water down sexual ethics in order to accommodate some folks in our culture, this too may be a move in the wrong direction. My hope is that Hurtado’s work and its stress on the “bookishness” of our Faith will find its way into the offices, studies, and pulpits of evangelical pastors and teachers across North America.

As this review reveals, I think very highly of Hurtado’s work and, in my view, Destroyer of the Gods should be required reading for students at Denver Seminary and highly recommended reading for faculty and pastors who peruse The Denver Journal. The book is solidly academic as evidenced by the seventy-one pages of endnotes and yet is readily accessible to the non-specialist. Dr. Hurtado deserves our thanks for showing not only how distinctive early Christianity was in the Roman world but also how much we owe those first believers for their dogged commitment to Jesus and His Way of life in a culture that saw them as wicked, irrational, or just plain weird. By the grace of God, may future historians say the same about those of us who live in 21st century America and profess Christ as Savior and Lord.