Jesus, Criteria, and the Demise of Authenticity 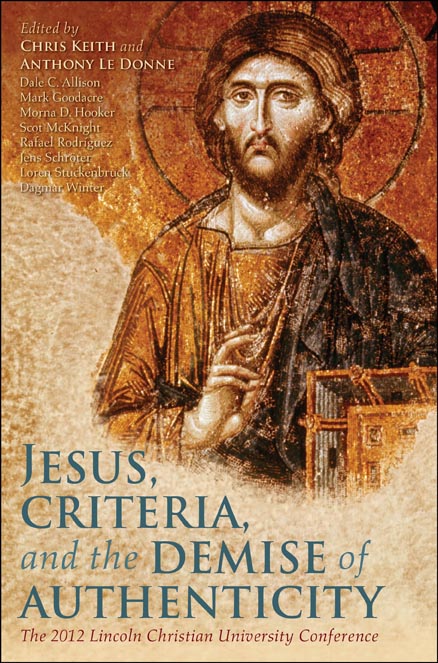 More than forty years ago Morna Hooker wrote two important articles on the problems with the standard criteria of authenticity in historical Jesus research that were largely ignored in the academy.  Today the problems are better known, the hegemony of the criteria have been broken, and this collection of essays wishes either to do away with them altogether or at least to recast them significantly.  The editors were both assistant professors at Lincoln Christian University when this book went to press, though today each is teaching elsewhere.

Hooker herself writes a brief foreword commending the collection, after which Le Donne gives a historical overview of the emergence of the traditional criteria—multiple attestation, dissimilarity, embarrassment, coherence, and Semitic linguistic background.  He also gives a brief overview of the contribution of each essayist, concluding (with some overstatement) that “an overwhelming number of New Testament scholars, along a very wide spectrum of persuasions, are deeply dissatisfied with the traditional approaches to the historical Jesus” (p. 17).

Keith authors the first of two chapters under the section heading, “Historical Methodology and the Quest for an Authentic Jesus” as one who wants to jettison the criteria altogether.  He finds them innately tied to form-critical models for the development of the Jesus tradition which he believes have been proved untenable; while recent attempts by N. T. Wright to propose a double similarity and dissimilarity criterion, and by Gerd Theissen and Dagmar Winter to use a plausibility criterion (with four prongs very similar to Wright’s four-part criterion) are simply modifications of the older criteria.  In addition to being subject to the criticisms of dissimilarity or coherence by itself, these tweaked criteria still fail to produce authentic Jesus material, because authenticity in the form-critical project was defined as that which did not reflect the theological interpretation of the Gospel writers and their communities.  It seems to me, however, that Keith has misread both Wright and Theissen/Winter on both of these points.  The criteria do not have to be tied to the form-critical agenda nor do a majority of their users define “authentic” as Tendenz-free, merely as something Jesus said or did.

Jens Schröter follows Keith with the most densely written contribution in the anthology.  He makes the valid point that sayings and actions of Jesus that pass the authenticity criteria are typically not what prove most influential in the overall syntheses of the historical Jesus by those who use them; but rather the social, political, and religious backgrounds and narratives into which those Gospel portions are inserted and which they themselves help to create.

Five chapters next take issue with part or all of the most influential authenticity criteria, one at a time.  Loren Stuckenbruck outlines a raft of problems with trying to determine where a Semitic original might underline a Greek saying attributed to Jesus.  While applauding John Meier’s relegation of this criterion to the secondary level of an “index,” Stuckenbruck stops short of rejecting the undertaking altogether.

Le Donne offers his second contribution to the volume by showing two main problems with the criterion of coherence.  First, it is often parasitic on the dissimilarity criterion, soon to be critiqued.  Second, it often presupposes a core of authentic material reflecting the preferred eschatology of a given historical-Jesus scholar, determined on some basis other than the use of the criteria.  These critiques seem apt, especially when again Le Donne refuses to scrap the criterion completely.

Dagmar Winter explains her criterion of plausibility as a way of reclaiming the quest for authenticity from the double dissimilarity criterion.  In addition to a measure of distinctiveness from the typical Judaism of Jesus’ day and the Christianity that followed him, a given Gospel tradition must also be coherent in terms of both its historical context (at least conceivable within early first-century Palestinian Judaism) and its historical impact (showing at least some continuity with the subsequent Jesus movement).  Like all the authors of the book, Winter stresses the tentative nature of the results and the impossibility of arriving at meaningful facts shorn of all interpretation.

Rafael Rodríguez wants to jettison the criterion of embarrassment altogether, both because it is just one part of the indefensible dissimilarity criterion and because whatever one might want to authenticate by embarrassment obviously wasn’t so embarrassing that it kept the original Gospel writer(s) from including it.  On the other hand, Mark Goodacre is not against multiple attestation in principle, but he does stress how dependent its use often is on the validity of the Q-hypothesis (which he rejects), how consistently it ignores the problems of Mark-Q overlap, and how frequently it wrongly assumes the complete independence from the Synoptics of the Gospels of John and Thomas.

The final main section offers two articles on moving beyond traditional historical Jesus research.  In the least nuanced piece in the volume, and with the greatest all-out-assault on business as usual, Scot McKnight unpacks four reasons why the quest of the historical Jesus is, in his opinion, of no use to the church.  First, the results inevitably reject the Jesus of the Gospels and the creeds.  Second, there is no consensus among scholars what that divergent Jesus actually looks like.  Third, memory studies, a recently heralded turn in historical Jesus study, merely diminish our confidence in people’s ability to preserve information accurately over time.  Finally, even when one portrait of Jesus does assume hegemony for a short time, it is invariably replaced by a quite different Jesus at a later date.

Dale Allison rounds out the numbered chapters of the book with the most autobiographical of its entries.  He charts his evolution from a reluctant user of the criteria to one who now wants to jettison them altogether in favor of looking within the Gospels for recurring patterns of teaching and activity and the coherent narratives of which they form a part.  Keith’s conclusion suggests that a way forward also includes recognizing the Gospels themselves as part of the reception history of Jesus, so that scholarship must seek to account for what in Jesus of Nazareth produced the perceptions represented by each Gospel narrative rather than trying to reconstruct or create a Jesus who is separate from or even contrary to the canonical portraits.

There is much of value in these essays, particularly those (the majority) that do not call for a wholesale end of the criteria’s use.  There is scarcely an abuse or pitfall in the employment of the criteria not noted in this volume.  I myself find Dagmar Winter’s four-part plausibility criterion the most helpful way forward.  Allison’s patterns in his book Constructing Jesus actually wind up using the double similarity prongs of this criterion, as does Tom Holmén’s “continuum” approach, surprisingly absent from any significant discussion in this volume.  Even more stunning in its absence is any reference to the results of the ten-year project of the Institute of Biblical Research’s Historical Jesus Study Group, edited by Darrell Bock and Robert Webb (Key Events in the Life of the Historical Jesus) and published by Mohr

Siebeck already in 2009.  This volume shows how the criteria can be used responsibly, in a positive manner, to authenticate a significant cross-section of the Synoptic tradition.  This yields a picture of Jesus that is consistent with orthodoxy even while it does not affirm everything that the canon or later creeds would want to affirm but does offer an important surprise or two along the way.  Martin Hengel and Anna Maria Schwemer’s Jesus und das Judentum (2007) accomplishes much the same thing.  This book at least is noted, even if not interacted with.

Keith and Le Donne’s anthology is also weak on other foreign-language publishers’ contributions to the topic.  By far the fullest analysis of the criteria remains Francesco Lambiasi’s L’autenticità storica dei vangeli: studio di criteriologia (1976), a work that painstakingly and convincingly itemizes the strengths and weaknesses of the criteria both individually and as a package.  René Latourelle (in L’accès à Jesús par les Évangelies (1978) and Fritzleo Lentzen-Deis (in Rückfrage nach Jesus, ed. Karl Kertelge, 1974) had important chapter/article length studies undertaking the same task as well.  Interacting with Stewart Goetz’s and my article on “The Burden of Proof” (in JSNT 1981) could also have spared the authors some reinventing of the wheel.  Typographical errors are refreshingly uncommon, though Targumist Diez Macho is treated as if Diez were his first name (rather than Alejandro) in several places, Spanish accent marks are often missing, “investigaciones” has its c wrongly doubled, the German “tendenz” needs to be capitalized, Immanence and imminence are confused, subservience gets turned into subservice, and shortened references to Jack Sanders’ article on randomness need to be put in quotation marks rather than italics.  The famous excerpt from nineteenth-century historian Leopold von Ranke is, as often, improperly truncated from “wie es eigentlich gewesen ist” and severed from its context which clarifies that von Ranke did indeed understand that all history involves an element of interpretation, even while he still believed in a substantial measure of objective truth.

Despite my serious misgivings about how frequently various problems are overstated in Keith and Le Donne, the issues the authors identify are real ones, not to be taken lightly.  I typically appreciate works that offer at least a few more suggestions for moving forward; pointing out what is wrong with others’ methods is always much easier.  But this is an important and valuable collection of essays by key scholars with which anyone engaged in historical Jesus research needs to come to grips.  Perhaps the editors can be encouraged to produce a sequel that focuses more on the details of their constructive alternatives.