Revisiting the Corruption of the New Testament: Manuscript, Patristic and Apocryphal Evidence 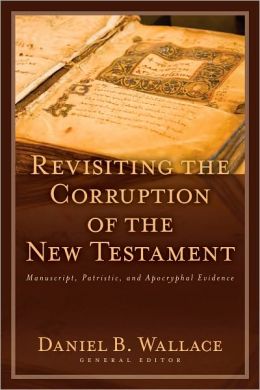 Textual criticism is not for the faint of heart, or mind or eyesight, for that matter. For this reason alone we may be grateful to Dan Wallace for editing a new series, Text and Canon of the New Testament. The inaugural volume of essays, Revisiting the Corruption of the New Testament, published in 2011, the same year that saw the release of an expanded version of Bart Ehrman’s The Orthodox Corruption of Scripture, evaluates and interacts credibly with Orthodox Corruption. Ehrman, both his scholarly and popular writing, gives us further reason for gratitude to Wallace and company. Ehrman’s less than flattering conclusions about the history of NT textual transmission has had the positive effect of causing text critics and students of the science/art alike to dig in and support alternative conclusions. As has often been the case throughout Church history, dissention breeds scholarly inquiry, not just knee-jerk polemics. These essays are well worth reading.

For the uninitiated, Wallace’s first essay is an able and accessible introduction to the series. “Lost in Transmission: How Badly Did the Scribes Corrupt the New Testament Text?” is, as Wallace mentions in the preface, written for a lay audience. One hopes that it, along with some of the more technical material in the following essays, will provide the impetus for neophyte readers to dig into the Alands, Metzger, Wallace, and yes, Ehrman, for necessary background information. It offers welcome correctives to the sort of epistemological despair one might experience after reading something like Misquoting Jesus.

Of particular note is one of Wallace’s reactions to Ehrman’s skepticism regarding our surviving manuscripts’ fidelity to the original autographs: “His is the right analysis, but for the wrong religion” (p. 34). Wallace marshals evidence that the Qur’an rather than the NT underwent thorough “orthodox” editing. The Qur’an’s claim to be without textual variants is eclipsed by the fact that all variants (including the originals) were expunged. Most scholars recognize the existence of theologically-motivated, NT editing over a couple of millennia, but it has certainly not been consistent or systematic. Most scholars would also agree that harmonization of the Gospels was to early scribes “a stronger impetus than a high Christology … the historicity of Christ was more important than their doctrine of Christ” (p.52).  Wallace briefly discusses seven passages alleged by Ehrman to show signs of orthodox corruption. He makes the case that Ehrman’s is not the only viable approach to these texts and concludes that our NT manuscripts are essentially reliable. The burden of proof remains Ehrman’s.

The title of the second essay by Philip Miller speaks for itself: “The Least Orthodox Reading Is to Be Preferred: A New Canon for New Testament Textual Criticism?” Miller explains that while Ehrman denies responsibility for so adding to the tenets of text criticism, “His methodology and resulting textual decisions indicate otherwise” (p. 58). Before examining Ehrman’s methodology, Miller offers a brief look at the historical evidence there is for theologically motivated changes to NT manuscripts and states plainly that “the ‘canon of unorthodoxy’ has been discussed for centuries” (p. 67). Striking about Ehrman’s approach are what seems to be his addition of “least” to this canon and the “high priority” he places on it (p. 67). In Text-Criticism 101, one learns above all else to prefer the reading that best explains the existence of the other variants. Miller walks us though three of the seven passages mentioned in Wallace’s essay to demonstrate convincingly Ehrman’s elevation of the canon of unorthodoxy.  Miller opines that the reason Ehrman and the UBS4 committee disagree in many instances is Ehrman’s tacit belief in a canon which trumps all others. “In the end, the canon of unorthodoxy appears to be presuppositionally driven” (p. 87).

“The Legacy of a Letter: Sabellianism or Scribal Blunder in John 1.1c?” is Matthew Morgan’s contribution to the volume. After introducing his approach, he begins with a survey of patristic reactions to Sabellianism. He includes what indications the Fathers give of their versions of John 1:1 before considering whether the heresy could account for the absence of the article before θεός in all but two 8th-century manuscripts. That is, did orthodox scribes almost “universally eradicat[e] the presence of the article” to maintain a distinction between the persons of the Father and the Son (p. 100)? Morgan’s answer is that there is no historical evidence that Sabellianism affected the textual transmission of John, moreover that “Origen, a credible third-century textual critic, becomes a pivotal historical witness to the exclusion of the article in John 1.1c” (p. 99). Next Morgan conducts a fairly detailed study of the habits of the scribes who copied those 8th-century manuscripts, followed by a discussion of grammatical considerations. With regard to the scribes, Morgan concludes that Codex Regius was copied by a careless person who, according to Metzger and Ehrman, made plenty of ignorant mistakes (pp. 104, 113), and that we know too little about Codex Freerianus’s scribe to form an opinion. As far as grammar is concerned, if καὶ ὁ θεὸς ἦν ὁ λόγος is “authentic, it would stand as the only clear instance where two singular personal nouns are interchangeable in the NT” (p. 122). There are no compelling reasons to doubt that θεός is anarthrous in the autograph of John 1:1c.

Adam Messer’s 4th essay, “Patristic Theology and Recension in Matthew 24.36: An Evaluation of Ehrman’s Text-Critical Methodology,” focuses on Mt 24:25 because it “is Ehrman’s example par excellence” in both Orthodox Corruption and Misquoting Jesus (p. 130). Ehrman’s thesis is that orthodox scribes deleted οὐδὲ ὁ υἱός from Περὶ δὲ τῆς ἡμέρας ἐκείνης καὶ ὥρας οὐδεὶς οἶδεν, οὐδὲ οἱ ἄγγελοι τῶν οὐρανῶν οὐδὲ ὁ υἱός, εἰ μὴ ὁ πατὴρ μόνος to keep heretics from impugning the divinity of Christ. Messer’s thesis is that the shorter reading is original and οὐδὲ ὁ υἱός was added very early on (both readings were known to the scribe and correctors of Codex Sinaiticus in the 4th century) by scribes familiar with Mark. Messer’s essay is tightly argued and offers a fine treatment of the theological issues that might have motivated either heretic or orthodox scribes; textual corruption, he reminds us, cuts both ways. Before critiquing Ehrman’s methodology, he also includes a 20 page review of patristic interaction with the text of Matthew and whether the Fathers were bothered by the possibility of an ignorant Jesus. Noteworthy is his observation that, since there were a number of ways in which the verse could have been changed, “It is oddly peculiar that when a variant occurs, it always occurs in the same way …- by removing οὐδὲ ὁ υἱός. One would expect scribes throughout a large empire to amend a text in more than one way. This goes a long way toward explaining why Messer rejects the reading of our earliest and “best” Alexandrian manuscripts.

The essay on the Gospel of Thomas, “Tracking Thomas: A Text-Critical Look at the Transmission of the Gospel of Thomas,” by Tim Ricchuiti compares Greek fragments of the gospel with a later, complete Coptic manuscript. The comparison and analysis are thorough enough to substantiate Ricchuiti’s conclusion (with the caveat that only about 1,000 words were analyzed, i.e., a statistically insignificant sample size) that the Coptic translation makes theologically motivated changes to the text. “It does indeed appear that the Coptic scribe altered Thomas in such a way as to make it more amenable to the [Nag Hammadi] community” (p. 228). Ricchuiti suggests that if comparable studies were done with NT fragments and later, fuller manuscripts, we might improve our understanding of the “relative level of reverence” accorded to early Christian writings (p. 228).

In the final essay, “Jesus as ΘΕΟΣ: A Textual Examination,” Brian Wright considers 7 of a possible 17 passages that appear to call Jesus God. He includes Jn 1:1, 1:18, 20:28; Acts 20:28; Gal 2:20; Heb 1:8; and 2 Pet 1:1. He treats the sometimes many variants associated with these texts with sufficient detail to establish his preferred readings, but without bogging us down in inordinate detail. His conclusion is that while θεός is predicated of the Father the vast majority of times in the NT, its use with Jesus “makes explicit what is implied by other Christological titles” (p. 264). Jesus was already thought of as God in the 1st century. The title was not a 2nd-century “subapostolic distortion of the apostolic kerygma”; nor was it a 3rd-century “doctrinal innovation to combat Arianism,” much less a 4th-century “creation of Constantine” (p. 265). Amen!