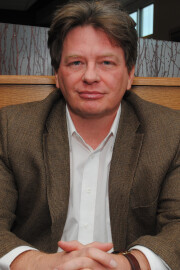 Dr. Douglas Groothuis earned his PhD from the University of Oregon and has been a full-time faculty member at Denver Seminary since 1993.

He has also taught at The University of Oregon and Metro State University, in Denver. He has authored thirty academic articles in journals such as Philosophia Christi, Religious Studies, Sophia, Bibliotheca Sacra, and Academic Questions. He has also written for Christianity Today, The Christian Research Journal, The Journal for Christian Legal Thought, The Chronicle of Higher Education, and many other publications. He has authored thirteen books, including Unmasking the New Age, The Soul in Cyberspace, Truth Decay, On Jesus, Christian Apologetics, Philosophy in Seven Sentences, Walking through Twilight: A Wife’s Illness—A Philosopher’s Lament, I Love You to the Stars (a children’s book written with Crystal Bowman), Christian Apologetics (2nd edition was released in 2022), and Fire in the Streets: How You Can Confidently Respond to Incendiary Cultural Topics. He has contributed numerous entries to reference volumes such as The Dictionary of Christianity and Science, The Apologetics Study Bible, The Evangelical Dictionary of World Religions, and the textbook, Problems in Value Theory.

Ep 97: The Church, Apologetics, and the Hiddenness of God
Ep 52: Christian Apologetics and Atonement in Modern Culture
Ep 27: Part 2: Theological Approaches to Suffering and Happiness
Back to Directory
We use cookies to ensure that we give you the best experience on our website. Please click the Accept button to acknowledge the use of cookies on our site.Accept