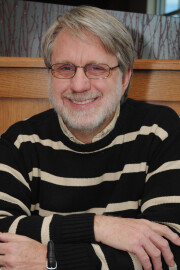 Dr. Scott Klingsmith joined the faculty of Denver Seminary in 2009. Dr. Klingsmith received his PhD in Intercultural Studies from Trinity International University, an MDiv from Denver Seminary, and a BA from Colorado State University. Before coming to Denver Seminary, Dr. Klingsmith served with WorldVenture in Vienna, Austria since 1985. He has extensive teaching experience around the world, including the Czech Republic, Ukraine, Bosnia, Germany, Hungary, Romania, India, and the U.S. He has written several papers and articles on the missions and missiology and has participated in numerous missions-related conferences and seminars.

Dr. Klingsmith fluently speaks English, German, and Romanian. He is a member of the Central and Eastern European Association for Mission Studies, the American Society of Missiology, the World Evangelical Alliance Missions Commission, and the Evangelical Missiological Society. Dr. Klingsmith was the founding editor of Acta Missiologiae: Journal for Reflection on Missiological Issues and Mission Practice in Central and Eastern Europe, and the author of Missions Beyond the Wall: Factors in the Rise of Missionary Sending Movements in East-Central Europe.