The Triumph of Christianity: How the Jesus Movement Became the World’s Largest Religion 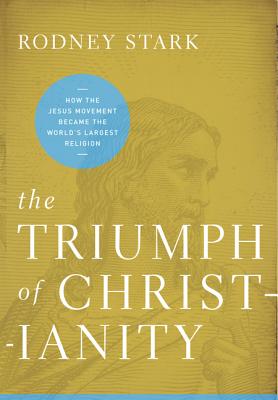 In 1996 sociologist Rodney Stark burst into prominence with the publication of his controversial and iconoclastic work, The Rise of Christianity.  Applying sociological theory and the use of metrics to the history of the early church, Stark provided a series of compelling arguments to show how the Jesus Movement grew from a tiny group of first century Jews to numerical dominance in the harsh and antagonistic environment of the Roman Empire three hundred years later.  Stark’s book was severely criticized by various scholars in the disciplines of history and New Testament studies because he made a vigorous assault on a number of long held beliefs about the makeup and growth of the early church.  Yet, over time, his arguments gained ground both inside and outside the academy simply because they made the most sense of the data.  And over the past fifteen years he has published a variety of monographs promoting the virtues of monotheism, the crucial importance of Christianity in the development of Western Civilization and how the Crusades were, in reality, a series of defensive wars against the militancy of Islamic expansion.

His latest book, The Triumph of Christianity, is in some ways a summation of his previous work and yet moves beyond that to show how the Jesus Movement has now become the largest religion in the modern world.  Through a combination of historical analysis, historiography and religious sociology wrapped up in one large volume, Stark attempts to show how Christianity has spread over the globe during the last 2000 years and why it continues to rise.  The book is neatly divided into six main sections beginning with ‘Christmas Eve’ (the state of Jewish religion immediately prior to the Advent) and moves briskly through the next five parts to arrive at the present era of global Christianity.  Yet The Triumph of Christianity is not another general survey of church history.  Stark intentionally gives theology short shrift and skips over major developments such as the rise of the papacy and significant people like Aquinas and Calvin.  Instead, he focuses his attention on specific episodes and eras from ‘new perspectives’ (p. 2).  By this approach, he seeks to provide new answers to old questions and new interpretations of well-known events.  Thus, readers are treated to his interpretations of the so-called Dark Ages, the larger medieval era, the historically notorious Spanish Inquisition and the famous Scientific Revolution to name just a few of the many facets of church history.  In this manner, Stark does his best to set the historical record straight, to settle a number of scores with some antagonists of the faith both past and present, and to show why Christianity deserves serious consideration by all people.

The book’s first two sections rehash many of the arguments found in The Rise of Christianity but in much greater detail.  While those familiar with the earlier work won’t find much new here, these chapters provide even more ammunition for Stark’s views on how and why the early church grew.  This sets the stage for parts three and four where he takes aim at Constantine, Islam, and the idea that the Middle Ages were a great era of spiritual vitality.  As the first Christian Emperor, Constantine is a villain in this story, albeit somewhat unwittingly, because he used the power of the state to arbitrate and enforce Christian orthodoxy.  This laid the groundwork for the idea of corpus christianum where, in Stark’s view, a religious monopoly was imposed upon European society for over a millennium to the detriment of all.  Moreover, the thousand-plus year medieval era was not a time of great faith but one of sparse church attendance, the regular practice of magic, and insipid spirituality punctuated by the threat of Islamic imperialism.  Fortunately, for both the church and European society, Pope Urban II had the foresight to call for a Crusade and thousands of upper class knights responded, thereby forestalling and then ending Muslim attempts to conquer the West.

In part five Stark turns his attention to the late medieval church and then to the Reformation.  He argues that in the former there were actually two churches, one of power and the other of piety.  The church of power, led by the papacy, crushed the church of piety because it was usually composed of dissident groups such as the Albigensians and Waldensians.  Luther’s reformation was, in many ways, a continuation of this battle and only survived because it was protected by the power of the German princes who converted to Protestantism.  Stark’s point in all this is to demonstrate the utter futility of religious monopolies as a mechanism for producing genuine faith and spiritual vitality.  His sociological analysis of the Lutheran reformation goes a long way to proving this point.  Based on some of the latest research, he demonstrates that people generally became Protestants or stayed Catholics based on the decisions of the local governments where they lived.  Doctrine was, at best, a secondary matter in their choice.  He concludes this section with an intriguing overview of the Spanish Inquisition, doing his best to show that it has been totally misrepresented over the past four hundred years by Protestant polemists and secularists alike.  His goal here is not so much to redeem the Inquisition as to condemn all those writers, critics and academics who blithely dismiss historical reality in order to show that religion in general and Christianity in particular is nothing but a curse on humanity (p. 350).  His well-supported rebuke serves as a useful reminder that every interpretation of past events needs careful scrutiny and occasional revision.

Stark saves his best work for last in section six, engagingly titled, “New Worlds and Christian Growth.”  Here he leverages his sociological expertise to demonstrate why Christianity is in the process of taking over the world.  His first area of analysis is the pluralistic culture of American society with its emphasis on religious competition.  Stark demonstrates, conclusively in my opinion, that pluralism is nothing but a blessing to the church because it forces its leaders and members to be intentionally evangelistic and outward focused in order to spread the Good News of the Gospel and survive.  Where this impetus is lacking, as in medieval and early modern Europe or contemporary mainline American denominations, Christianity shrivels up and dies.  But in a free market of ideas and beliefs, those groups who can best persuade others to join them are the ones that will come to have the greatest ‘share’ of the culture.  Some readers, especially those of a socialistic and academic bent, will probably dislike what Stark has to say here yet the facts are clearly on his side.  Moreover, he goes to great lengths to slay the dragon of secularization and shows that, in the end, it is a beast with little or no power against the growth of religion in general and Christianity in particular.

Given the overall strength of this book and Stark’s prodigious scholarship, one hesitates to offer a critique of what he has argued.  Yet there are some points that Stark presses which will require more research and investigation, especially by historians.  One of these is his repeated emphasis that the religious monopoly of the medieval corpus christianum had the unintentional effect of discouraging church attendance and Christian faith.  My own work with sixteenth century English church court records seems to indicate that, while morality was usually way below biblical standards, both parish churches and cathedrals were dynamic and active elements of English life in the early modern era.  Moreover, as Foxe’s famous Book of Martyrs attests, people in the Reformation era did not always do as their government said.  In fact, just like the martyrs of the early church, they sometimes willingly went to the stake for their personal beliefs.

A second and related issue concerns Stark’s repeated emphasis that there was no such thing as the Dark Ages in early medieval Europe.  In his view, the era that followed the collapse of the Empire was one of great innovation, technological development, and moral progress, all of which were rooted in the Christian faith.  The question that arises from these claims is how this could come about if spiritual life during this time was as insipid as he believes.  There seems to be a fundamental disconnection here.  And the fact that Stark does not interact with the work of Norman Cantor, probably the greatest medievalist of the last generation, weakens an already shaky foundation in this regard.

Despite my stated concerns, I want to stress the value of this book for pastors, professors, and students alike.  For starters, its forty-two page bibliography is a warehouse of resources on a wide variety of subjects related to Christianity, its history and its advance through the centuries.  Stark’s breadth of research is impressive and he consistently demonstrates how scholarship can apply to the contemporary setting as well as to history.  Second, his analysis of globalization and pluralism should serve as an encouragement to all those who passionately seek to reach people with the Good News of the Gospel.   Stark shows that the world at large and American society in particular are ‘target-rich’ environments for Christians who will pray, innovate and compassionately serve others in order to win a hearing for the message of the Savior.  Third, this book will require mission leaders as well as potential missionaries to re-evaluate the spiritual needs of the world in the 21st century.  If Stark is right about the strengths and weaknesses of global Christianity, Europe may be the area of greatest Gospel need in the coming decades.

The Triumph of Christianity is an engaging work that will likely gain a wide readership in the coming months and deservedly so.  While it will annoy some and anger others, it will certainly motivate many to ministry and maybe even some to faith.  Moreover, it provides needed hope to Christian leaders, teachers and workers everywhere because it shows that our work is not in vain.  Rodney Stark has demonstrated that the mustard seed of God’s kingdom that was planted by Jesus two millennia ago has now grown into the largest tree in humanity’s garden of religions and beliefs.  For such a clear and compelling demonstration of this truth, as well as many others, we are in his debt.