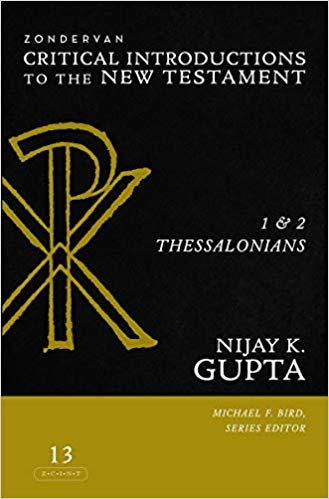 What do we consult when we need an introduction to a New Testament book? Typically, we may resort to one of several sources. We could get a very brief synopsis in a study Bible or consult the short entry in a one-volume commentary on the New Testament (or Bible). Of course, there is the distinct genre of “New Testament Introduction.” And finally, one could get hold of one of the commentaries on the book in question and read up the initial pages devoted to setting that book in its context. All of these have their places, but they are also subject to the limitations of space.

For example, taking the Thessalonian letters, the robust NIV Zondervan Study Bible devotes 6 pages to introducing them. The New Bible Commentary has 4 pages. R. Brown’s An Introduction to the New Testament has 18 pages, while D. DeSilva’s An Introduction to the New Testament moves up to 28 pages. When it comes to full-fledged commentaries, a brief sample shows that Witherington has 45 pages; Fee (NICNT), about 17; Bruce (WBC), 28; Wanamaker (NIGTC), 62; Green (PNTC), 78; and Weima (BECNT), 60. [For the key to the abbreviations to these commentary series, see the NT Bibliography in the “Denver Journal.”]

Apparently, Zondervan felt these were insufficient and have introduced a new series entitled Zondervan Critical Introductions to the New Testament, edited by Michael Bird, the first entry of which has now appeared. Nijay Gupta, associate professor of New Testament at Portland Seminary, George Fox University, is the author. In comparison to these others, Gupta’s volume approaches 300 pages in length. The outline to this volume is very simple. For each of the Thessalonian epistles there are four chapters. The first discusses the text of the letter. Here the author cites the textual witnesses to the letter; the most significant textual variants found in the Greek text; a brief discussion of authorship and date (surprisingly, only 2 pages, whereas Green’s commentary devotes 11 pages to the authorship issue); various features of the letter (e.g., genre, style, structure, sources and influences); and a list of recommended reading. In appendices, Gupta compares his outline of the letters with five other scholars.

In the second chapter for each letter, Gupta discusses the background and situation behind the writing. We learn about the city of Thessalonica, its religions, the influence of Rome, the presence of Jews, and Gupta’s take on the specific situation that elicits the letters. In addition, he surveys Paul’s relationships to the Thessalonians according to Luke-Acts. The chapters include a major discussion of leading scholarly opinions on the circumstances behind the letters. A recommended reading list concludes the second chapters.

The third chapters comprise Gupta’s discussion of the major themes that run through the letters as well as his own discussion of some of the interpretive debates. Examples of the latter in 1 Thessalonians include: “Infants or Gentle? (2:7b)”; “Is Paul Anti-Semitic? (2:13-16)”; and “Paul’s Vessel Metaphor (4:4).” For 2 Thessalonians, he considers such cruxes as: “The Day of the Lord has Come? (2:2)”; “Who is the Man of Lawlessness? (2:3)”; and “Who (or What) is the Restrainer? (2:6-7).” These third chapters follow with a discussion of the major theological concerns in the letters—in conversation with the views of other scholars. A recommended reading list concludes the chapter.

Dr. Gupta ends his discussion of each of the letters with a chapter devoted to the history of their interpretation, moving from the church fathers and medieval commentaries into the period of the Reformers. Interestingly, he devotes a separate section to modern-era interpretation (1800-1985) of the “rapture” doctrine (pp. 162-65). He also considers briefly non-academic uses of the letters, and then concludes with modern interpretation right up to 2017. Again, the chapters end with a list of recommended readings. A 25-page bibliography concludes the book.

This review has been largely descriptive–to survey the terrain that this volume covers. Often, and perhaps unfairly, I found myself saying words to this effect: “So, Dr. Gupta, what is your own take or solution to this issue?” He does a masterful job of outlining many of the scholarly options for various points—which is certainly the strength of the book–but I was often left with a question: is there a best interpretive option here? Can’t you help us see whether one of the options may be preferred? Of course, Gupta may reply, “Well, please see my commentary on these letters for my views on these various matters” (though that commentary is less than one-half the pages of this volume; see 1-2 Thessalonians [New Covenant Commentary], Cascade Books, 2016). So, for a survey of interpretive options, Gupta has given us an impressive volume. There’s no better introduction to the background of these letters currently out there–one that collects a range of issues typically found in multiple sources. Here they all are in one book. The volume (and the series itself) will appeal mostly to Bible professors and seminary students, though some pastors may be interested in a more robust survey of the main introductory issues if they are preparing to teach an entire series of sermons on the letters. A robust survey is what this book provides.