A Brief History of Old Testament Criticism: From Benedict Spinoza to Brevard Childs 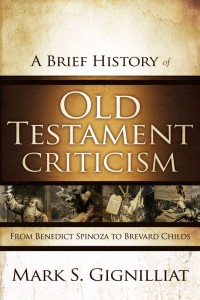 The impact of Old Testament criticism upon modern biblical scholarship is inescapable, as can be attested by a cursory scan of any number of commentaries or historical overviews.  Even the most casual student of Old Testament study is certain to encounter the names of such scholarly giants as Wellhausen, Von Rad, or Brevard Childs, as well as terms that may be unfamiliar like the “documentary hypothesis,” “Sitz im Leben,” or “canonical criticism.”  In this complex world of interpretive theories and methodological strategies to Old Testament interpretation, Mark Gignilliat has provided a single-volume overview of Old Testament criticism that is easily accessible, speaks to a wide readership, yet slim enough to occupy a spot in the fullest of bookshelves.

Typical of other Old Testament criticism overviews, Gignilliat presents key figures who, in his opinion, brought about significant paradigm shifts in Old Testament interpretation.  What is unique to Gignilliat’s contribution is that he discusses these scholars within the framework of an intellectual biography or, as he terms it, a “picture gallery tour” (p. 12), in which he situates each scholar in his own culture and time period.   The impetus behind his approach is drawn from personal experience in that he acknowledges as a student, his “knowledge of these figures, their methods, and location in the history of ideas was thin at best.” (p. 11)  By placing these men in their unique historical settings, Gignilliat seeks to provide the reader with a better understanding of the diverse cultural and societal influences that would have shaped their faith and approach to the biblical material.

The figures in this overview include a wide variety of scholars who fall along a broad spectrum of approaches to the biblical material.  Focusing on a different scholar and their respective contribution to Old Testament criticism for each chapter, Gignilliat moves in a chronological trajectory that demonstrates a continual progression of ideas shaped by culture.  In this trajectory, Gignilliat outlines 150 years of biblical criticism that saw the division of theology and biblical or “historical” studies into two separate camps, the emergence of biblical archaeology and its impact on interpretation, the effects of anti-Semitism in a post-World War II era, and more recent methodologies that seek to rejoin theological and historical criticism.

In chapter one, Gignilliat introduces Baruch (Benedict) Spinoza (1632-1677), a Jewish scholar who was expelled from his congregation for espousing radical ideas, such as “the denial of Mosaic authorship of the Pentateuch.” (p. 19)  For Spinoza, it was not divine inspiration or long-held tradition that was the starting point for understanding Scripture.  Rather, one’s own judgment and reason were the only tools required to carefully scrutinize the biblical accounts.  Any supernatural or unsubstantiated claim had to be “subordinated to human, intellectual autonomy.” (p. 25)  In a cultural climate that was currently experiencing the aftermath of the religious and political abuse of the Thirty Years’ War, Spinoza’s theological approach paralleled his political assertions that “societies should be governed by a rational/free-thinking kind of morality rather than religiously governed political/ethical systems.” (p. 23)

The following three chapters introduce in turn Wilhelm M. L. de Wette (1780-1848), Julius Wellhausen (1844-1918), and Hermann Gunkel (1862-1932), all of whom wrestled with the tension between a confessional versus academic understanding of Scripture, as well as the shift in rational thought and understanding as the culture moved from Enlightenment to Romanticism.  Gignilliat’s portrayal of de Wette is one of a deeply religious man, whosehistorical-critical approach, while influenced by the rationalism of Spinoza and Kant, was never divorced from his personal religious fervor.  The primary contributions of de Wette are addressed, including his positive understanding of the role of “myth” in the biblical narrative, his treatment of the “discrepancies” in Chronicles, and his locating the composition of the Pentateuch within the monarchical period.   Although de Wette could not view Scripture as an accurate historical record, he upheld and valued it as an accounting of the religious worldview of the Israelites, which communicated the “feelings and beliefs of those who composed the documents and cherished them as their sacred writings.” (p. 52)

In presenting Wellhausen’s source criticism approach and his reconstruction of Israel’s history of religion according to literary sources (JEDP), Gignilliat devotes a large portion of the chapter to addressing the events leading up to and surrounding the publication of Wellhausen’s theory, as well as a thorough overview of the Documentary Hypothesis.   What is interesting in Gignilliat’s treatment of Wellhausen is the stark contrast drawn between his and de Wette’s confessional view of Scripture.  Unlike de Wette, who seemed content to allow the tensions between faith and rational thought to remain, Gignilliat portrays a Wellhausen who became increasingly unconvinced of the theological validity of Scripture, so much so that he eventually stepped down from his position as theology professor at the university in Greifswald.

Gunkel, firmly entrenched in the Romantic period, was an integral player in the shift of Old Testament criticism “away from detached observation, obscure rationalism, and pure induction rooted in the scientific method” (p. 87) to an emphasis on expression and experience.  Gunkel’s form-critical approach attempted to reconstruct the religion of Israel based upon forms and genres that were perceivable in the biblical documents.  In his view, these forms, “including both the events and moods associated with these experiences” (p. 99), depict the actual experienced religion of the Israelites.

The final three chapters focus on three scholars who trended toward a more confessional yet academic treatment of the biblical material.  Gerhard von Rad (1901-1971) followed the approaches of Wellhausen and Gunkel of separating out “sources” and “forms,” but broadened the scope to include various religious traditions originally embraced by various Israelite groups, and eventually combined by an editor to create the final biblical account of Israelite religious history.  According to Gignilliat, von Rad’s interest “was in the final form of the Hexateuch and the long, complicated road leading to this final form.” (p. 111)  Situationally, Gignilliat portrays von Rad as a German Old Testament scholar in an increasingly anti-Semitic nation, which serves to highlight his commitment to a high view of the Old Testament as well as his opposition to anti-Semitic readings in the midst of a growing Nazi ideology.  The emergence of biblical archaeology in the twentieth century influenced the comparative approach of William F. Albright (1891-1971) as he sought to establish the historical validity of Scripture based upon archaeological evidence.  “For Albright, the essential historical character of the Old Testament narratives was integral to the authority of the Bible, even if the reporting of the events in the Old Testament was blurry in the details.” (p. 132)  Brevard Childs (1923-2007) is the focus on Gignilliat’s final chapter, and the scholar that, in his opinion, most represents a combining of a “confessional and critical posture toward Old Testament interpretation.” (p. 147)  Childs’ canonical approach views the final, received form of the canon as the divine revelatory word of God.

A deficiency of this book, and one that Gignilliat acknowledges both in his introductory and concluding comments, is the absence of postmodern approaches that have made significant contributions to the realm of Old Testament criticism, specifically the readings from marginalized groups.  Predicting this as a deficiency and in an effort to keep his overview brief, he repeatedly asserts the conscious decision to limit his focus to the larger trends and tendencies from the modern period, hoping that this book can serve as an impetus toward further study.   However, in this reviewer’s opinion, a larger concern is his lack of clarity in presenting the various critical theories, such as the distinctions between Wellhausen, Gunkel, and von Rad.  While a serious student of Old Testament would likely be aware of the nuances of each theory, the uninformed reader could easily get lost in the seemingly interchangeable terms of “source,” “form” and “tradition.”  In addition, a common thread that I formed myself, but wished the Gignilliat had emphasized more, was that of the linear trajectory of these theories.  Although he culturally situated each approach, he only occasionally referenced their interconnectedness and reliance upon what had preceded.  A few introductory and closing remarks in each chapter would have more clearly allowed the reader to grasp the larger continuum of criticism as it evolved.

One of the strongest aspects of his book is the unique methodology, the “picture gallery” approach, which draws particular attention to the foundational faith of each of these men.  Although some of these scholars have been vilified for their interpretive methods and seemingly low view of Scripture, the short biographies highlight the reality of their spiritual convictions regardless of a “liberal” or “conservative” leaning.    To sum up, this brief overview would be a useful reference for any student looking to identify quickly major interpretive methods and the cultures that helped to shape them.