A Different Priest: The Epistle to the Hebrews 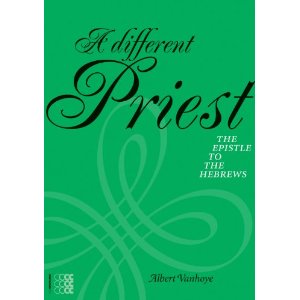 Anyone engaged in a serious study of the book of Hebrews is well acquainted with the work of Albert Vanhoye and the numerous specialist articles and books he has published on it. In addition he has published various works beyond Hebrews that cover other topics of exegesis, biblical theology, and spirituality, many in French and some in Latin. A Jesuit scholar, he has taught in various places in France and Italy, and was appointed Cardinal by Pope Benedict XVI in 2006.

The book appears under the auspices of the “Society for the Study of Biblical and Semitic Rhetoric.” As such, it is part of a movement engaged in “rhetorical criticism,” but more specifically, the study of the rhetoric of biblical books—as distinct from the rhetoric that falls under the rubric of Greco-Roman. Biblical or Semitic Rhetoric, the movement avers, differs in considerable ways from the Greco-Roman canons of rhetoric, and biblical texts need to be analyzed according to the unique rhetorical laws that govern them. This sets this work apart from that of many New Testament scholars who engage in tactics that employ liberally, if not exclusively, Hellenistic rhetorical categories. At the same time, as with all rhetorical-critical approaches to texts, a central conviction is that the “text’s form and arrangement is the main gate which gives access to its meaning” (p. 3).

In the forward Dr. Vanhoye asserts the now commonly-accepted view that Hebrews is a speech or “magnificent homily,” as he puts it, and it must be studied as an oral discourse, not a written letter. For that reason, rhetorical criticism is the indispensable tactic to employ to understand what the author has accomplished. As he proceeds to argue, understanding the book’s orality and use of rhetorical devices keeps interpreters from getting lost in “inextricable doctrinal difficulties” that obtain if the book is a literary document. Also, observing that Hebrews employs “biblical rhetoric” keeps one from misconstruing features that “conflict” with Greco-Roman rhetoric. Even what one might consider “contradictions” in a literary text are readily explained in an oral discourse. In his words, “The interpretation must not therefore take every statement in an absolute sense, but, on the contrary, relativize it, taking account of its situation and the aim in sight.” (p. 191). At various points he includes words to this effect: “… contrary to the rules of Graeco-Latin rhetoric, but in conformity with the uses of biblical rhetoric” p. 30).

To accomplish his task Vanhoye takes an interesting approach. First, he moves through the entire book of Hebrews in quick fashion (33 pages) to give the overall structure/outline of how the book works. Then he revisits the entire book in more detail. In Part One he examines the Name of Christ, the rhetorical function of 1:5-2:18. In contrast to those who focus on the comparison between Christ and the angels, Vanhoye argues that the true objective rhetorically is to highlight the main theme of the section, viz., the “name” of Christ.

Part Two presents Christ as a trustworthy and merciful high priest (3:1-5:10). The central section of Hebrews (Vanhoye’s Part Three) concerns Christ as the perfect high priest, in more specific terms (5:11-10:39). The book concludes with two sections detailing the results of Christ’s name and priesthood for the Christian life. In Part Four Vanhoye sees faith and endurance as a result (11:1-12:13) while Part Five contains a call for right conduct in the search for holiness and peace (12:14-13:18) before the concluding good wish (13:20-21) and what Vanhoye calls the “Dispatch note” (13:22-25).

Speaking of these final verses, Vanhoye cites approvingly a sixteenth century theory connecting Paul to the book. In this view Paul ratified the work of one of his collaborators who authored the book, and then Paul personally added the “dispatch note” at the end, guaranteeing its authority (cf. Paul’s practice in his own letters in Rom 16:22; 1 Cor 16:21; Col 4:18; and 2 Thess 3:17 plus the mention of Timothy and the final wish for “grace”).

His rhetorical approach leads to some interesting assessments. I will cite only one example, the thorny section of 5:11 – 6:6. To begin, Vanhoye does not believe that 6:1-2 describes a Christian experience, making a good case in my estimation. But then, convincingly, he sees a “first conversion … described in glowing terms” in 6:4-6. But those who possessed these gifts were guilty of a culpable, inexcusable fall, the nature of which is unknown. Of this Vanhoye says, “It is therefore an extremely serious fall and not a matter of faults or weakness which the mercy of Christ generously forgives (see 2,17). This fall completely contradicts clinging to Christ in faith” (p. 189). Thus, there were Christians who had seriously fallen and are crucifying the Son of God again in their rejection of faith. However, Vanhoye goes on to say, “His words would be different if he were addressing Christians who had actually fallen” (p. 190). In other words, the point of citing these first converts (6:4-6) who had fallen was to keep the present readers from making the same mistake. Indeed the subdivision that follows (6:7-8) shows the author’s intent—blessing for good works and a curse for the others, and the verses following (6:9-12) point to the author’s conviction that the readers will heed his warning and persevere. The key is to avoid being “nonchalant” (5:11; his translation of nothroi, which other versions render sluggish, lazy, or dull).

A few translation infelicities aside, this book is a welcome addition to the body of important work on Hebrews. Vanhoye engages in careful exegesis throughout, including important grammatical and lexical analyses of important features. His detailed analysis of the entire text as a remarkably crafted whole makes a convincing case that what we have called “The Epistle to the Hebrews” is the full text of a marvelous Christian sermon. As such, it constantly conforms to the rules of Semitic rhetoric, including various types of parallelism, inclusios (which Vanhoye calls “inclusions”), synonymy, antithesis and complementarity, and employing a concentrically symmetrical strategy. It would be hard to find a more useful example of the practice biblical rhetorical criticism even if one does not agree with all this book’s conclusions.