A Traveler’s Guide to the Kingdom: Journeying Through the Christian Life 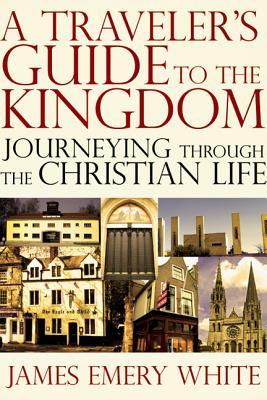 More often than we realize, specific geographical locations play a major part in God’s encounters with his people.  One need only think of Jacob wrestling with the angel at Bethel, Moses receiving the Law at Sinai, or Jesus meeting with the Samaritan woman at Jacob’s well to observe this reality.  From the perspective of Scripture, place is spiritually important.  In his new book, James Emery White takes this sometimes overlooked but explicit biblical theme and develops it out for contemporary Christians.  Using the metaphor of journey, he leads his readers on a global trek to a myriad of spiritually significant locations in order to teach on various aspects of biblical faith.  His goal with this approach is to help believers move beyond simply knowing about Christ to the more abundant life ‘that is in Christ’ (p. 7).

White, who serves as the founding and senior pastor of Mecklenburg Community Church in Charlotte, North Carolina, astutely begins the journey with the theme of conversion.  To locate its full significance in our lives he takes us to The Eagle and Child Pub in Oxford, England where C.S. Lewis, a most reluctant and yet brilliant convert, met with J.R.R. Tolkien and other members of the Inklings for years.  He then moves on to Iona Abbey in Scotland to discuss the nature of spirituality, St. Catherine’s Monastery at Mt. Sinai, Egypt to help us learn to listen to God, and six other specific places where he covers the themes of community (The Apartheid Museum in South Africa), sexuality (Chartres Cathedral), calling (The Billy Graham Library), mission (Wittenberg), God’s will (the Ten Boom House in Holland), and doubt (Dachau Concentration Camp).  At each stop White describes its special importance and proceeds to weave in some teaching on that specific topic of spiritual formation.  By the end readers have not only traveled (mentally, at least) to some fascinating – and disturbing – locations, but have also been shown how to deepen their relationship with the Lord of history.

This book has many strengths, perhaps the most significant of which are some of the specific themes the author has chosen to address as he guides us on our spiritual journey.  In my view, the chapters on sexuality, calling, and doubt were not only exceptionally insightful and well written but bore down on key issues that many believers, especially those under the age of thirty, engage on a daily basis.  White strikes a wonderful balance by highlighting the beauty of Chartes with sexual purity, the significance of the Graham library with Christ’s call, and the utter horror of Dachau while addressing the challenge of doubt.  His ability to integrate the significance of different places with solid theological reflection on some of the most demanding issues in our daily lives make the book in general, and these three chapters in particular, enormously rewarding.

In addition, A Traveler’s Guide to the Kingdom also sheds some valuable and necessary light on some other aspects of our faith that many American Christians may need to meditate on and mature in.  Our society runs at breakneck speed and finds it difficult to unplug from technology, making White’s description of the solitude of Iona Abbey deliciously attractive.  Upon finishing that chapter I wanted to hop on a plane, take the ferry to this famous island off the Scottish coast and do my best to hear the still, small voice of God’s Spirit.  His use of the Apartheid Museum in Johannesburg, South Africa to teach on the neglected necessity of Christian community served as a much-needed corrective to the American over-emphasis on individualism.  In an evangelical sub-culture that places little value on loyalty to the local church, this chapter functions as an ‘in your/our face challenge’ to remember that Christianity is not about me (surprise, surprise).  And while the story of Corrie Ten Boom and her family’s unspeakable suffering at the hands of the Nazis is well known, White ‘retells’ it with a sensitivity that helps us see clearly that, sometimes, carrying our cross is part and parcel of God’s good and perfect will for us.

On a personal note, reading the chapter on C.S. Lewis and the Oxford pub inhabited by the Inklings was nothing short of sheer literary joy.  White makes The Eagle and Child pub come alive as he describes its ethos and takes us into the back room where Lewis and his friends met.  But of greater significance is White’s analysis of why Lewis has had such a deep impact on contemporary evangelicals, myself included.  In his view, Lewis serves as a classic example of what Jesus intended when He told us to love God with all our heart, soul, mind and strength.  Moreover, the Oxford don’s life epitomized the gracious work of God, serving as an encouraging reminder of how conversion works in us over time.

Having noted this book’s many strengths, I need to note that, in my opinion, the chapter on Wittenberg, Luther, and the theme of ‘making history’ was a bit overwrought.  Knowing Dr. White’s love of history in general, and church history in particular, I was somewhat surprised by his choice here.  Luther did ‘make history’ by fundamentally reshaping the nature of 16th century Christendom.  But this was due to the facts that he was a larger than life persona and, providentially, came under the protection of Prince Frederick of Saxony.  Had things been just a tad different, Luther probably would have ended up as a less prominent martyr like John Hus; an individual with similar courage and convictions but with far less long-term impact because he lacked the same political and military protection as the great German reformer.  Because people like Luther loom so large in church history they tend to make poor models and mentors for the majority of us mere mortals.  In my view, a better choice along these lines might have been either Teresa of Avila or Charles Simeon of Cambridge, both of whom were more ‘average’ people and yet still made history in the ways they each respectively served Christ.

Despite my somewhat ‘nit-picky’ critique in the last paragraph, I want to strongly recommend A Traveler’s Guide to the Kingdom for every reader of The Denver Journal.  By aligning the theme of spiritual formation with both specific places and various people, Dr. White has done us all a great service.  He has broadened our horizons, widened our knowledge, encouraged our hearts and accomplished his goal of moving us towards a deeper walk with the Savior.  If only all manuals, books, and tracts on spiritual growth were as useful as this one!  My hope is that you will read it and profit from it as much as I have.