Addiction and Virtue: Beyond the Models of Disease and Choice 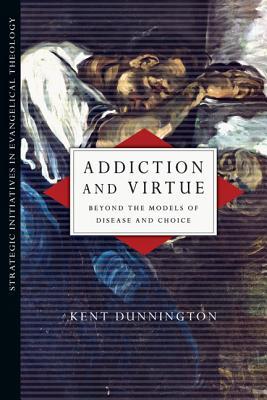 Any student of philosophy knows that the human condition is a perennial topic within the field. Subjects of ontology and the good have been discussed countless times both in primary and secondary texts.  When it comes to the human condition, a topic often ignored is addiction.  Addiction is typically relegated to psychology and philosophical, and psychological perspectives are divided.  Kent Dunnington, professor of philosophy at Greenville College, refutes this false dichotomy by examining addiction under a philosophical and theological perspective, namely in light of Aristotelian and Thomistic thought.  Dunnington adapts the Aristotelian-Thomist idea of habitual behavior to addiction and allows it to serve as a mediator between the two prominent views of addiction as seen in contemporary psychology: disease and choice.

In order to properly articulate this new thesis in addiction studies, Dunnington must first expose problems in the contemporary psychological approaches.  This is the central thesis of the book which lays the groundwork for further explanation, mainly that addiction is an “embodied critique of the culture which sustains it” (p. 10) and that the theological doctrine of sin can further ground one’s understanding of addiction.  Whereas psychology often tries to pinpoint why people engage in addictive traits, Dunnington, in great effort, posits why people become addicted to certain behaviors (namely, alcoholism).  In addiction there rests an ontological significance.

Dunnington is not satisfied with examining addiction as a disease or a choice.  For if disease is a reorienting of the physical brain and the way it makes one act, then why cannot the brain simply be rewired, or in technological terms, rebooted?  Dunnington is equally troubled with the choice model of addiction, i.e., one must simply make an intentional effort to stop the addiction cycle. Yet, this too is problematic and simplistic.  An addict may desire to change his or her lifestyle, yet is unable to follow through on such a change.  For the addict may make the difficult decision to abandon the addiction but lack the resources and tactics to ultimately stop the behavior.  A paradox forms here.  The addict may have a strong desire to be freed from the addiction, but the habitual behavior has already formed, thus creating a seemingly perennial inclination to return to the addiction.  Like the disease outlook on addiction, the choice model also inhibits failures.

What remains, however, is a view of addiction that has gone largely overlooked.  Using Aristotle, and more prominently Thomas Aquinas, Dunnington declares that addiction is a result of habitual behavior.  Habit, then, is a “relatively permanent acquired modification of a person that enables the person, when provoked by a stimulus, to act consistently, successfully and with ease with respect to some objective” (p. 62).  This displaces the disease model.  If disease is understood like it is in the medical field, it is something that one has or something that occurs naturally in the body.  Addiction does not fit this definition.  Addiction is something that one becomes as a result of a habitual behavior.  While Dunnington primarily uses alcoholism as an example throughout the book, other common addictions apply to his model as well (drugs, sex, pornography, gambling, etc.).  Addiction, despite social misconceptions, is one’s pursuit of the good.  The addiction may turn into something horrendous, even life-threatening, but the aim is always towards the perceived betterment of the individual.  One does not engage in drunkenness everyday because one believes it is bad for them.  Instead, the alcoholic turns to the drink because it is something to ease the pain, cure the boredom, or get the high they need. All of these potential upshots are pursued in the struggle for something good. With an addiction to a substance like alcohol, however, good is never attained. Instead, the fight for good ends in despair.

Following Aquinas, Dunnington states that habit is a strategy of desire. Desire is infinite, a consistent pursuit of something.  When a habit is formed, it becomes increasingly difficult to amend.  The more a habit becomes entrenched the more easily it performs its function. This is both in quality and quantity.  Many addictions start small and over time build into something substantial.  This is because one often builds a tolerance to the object of addiction.  The more tolerant one becomes, the more one needs the additive substance in quantity.  Furthermore, as the addiction continues to form, the quality of the substance increases.  Here also, habit is a mediator between free will and determinism.  Habit is like free will insofar as it connects with one’s volition and the reasonable assent to desire.  It connects with determinism because the actions that the habit performs are not the direct result of deliberation that is seen in free will.  Thus, a habit is a patterned act formed by both will and determinism.

Addiction is much deeper than a substance or behavioral dependence.  It is a cultural indictment.  The current culture is a bored culture.  One wants to fill the void, no matter how large or miniscule, with something else.  For it is in one’s “down time” when one can conceptualize the reality of their life – both successes and failures – which may haunt the individual.  These thoughts can antagonize the individual and thus the boredom must be cured, must be filled with something.  Dunnington writes, “… addiction provides a response to the overwhelming life of boredom that plagues the working class with fragmented and compartmentalized striving by making one thing matter.  For those who are bored with nothing to do, addiction stimulates by entangling and consuming; for those who are bored with too much to do, addiction disburdens by simplifying and clarifying” (p. 118). Addiction cuts off the meaning of life, the genuine pursuit of good, and the authentic character of the addicted person.

From a theological perspective, Dunnington turns the addiction to a cultural paradigm into a form of false worship.  Addiction, at its source, uses something (whether it be alcohol, sex, pornography, etc.) and turns it into an idol.  Thus, sin is intrinsic to addiction.  It is the yearning for something other than God.  The addictive idol leaves one continuing to want more.  The addict will consistently crave more.  Each craving is a direr attempt to find meaning, yet it leaves the plight of the addict in a severe situation.  Meanwhile, the ultimate source of happiness, the object of true worship, and the rescuer from addiction goes unnoticed.  Part of this is due to society’s dependence on labeling.  Famed help group Alcohol Anonymous places great emphasis on the identification as an alcoholic.  Dunnington believes this to be a tragic mistake.  For if one identifies as an alcoholic (or anything else), then the struggling addict will be unable to reconcile to an identification with Christ.  What Dunnington desires is for the addict to transfer their dependence from something harmful to dependence on the perfect God.

As someone who has been studying philosophy for a few years, and also has worked with substance abusers at length, Dunnington’s treatment is refreshing and rewarding.  I have long struggled to accept either the disease or choice model holistically. Addiction is neither a disease that one intrinsically has nor is it a choice that one can enter into and out of with simple volitional ease.  An addict is something one becomes, a direct result of one’s behavior.  This behavioral formulation is habitual.  Relying heavily on Thomistic thought, Dunnington reestablishes the pattern of addiction as a philosophical and theological concern.  One area of concern is that Dunnington implies that there is hope for a recovering addict to enjoy in moderation the object of their former addiction again.  This is opposite of what is typically taught, especially by groups such as Alcoholics Anonymous. Some people might have to reorient their livelihood to continue onward without ever using a specific substance again.  Besides this minor quibble, Dunnington posits a riveting and captivating approach to contemporary addiction.  It is one that will provoke thought in fields of philosophy and psychology.  The book is timely and ought be read by those dealing with addictive behavior and those who find a loved one engaging in poor habits.  For Dunnington does not chastise the individual, but rather offers a concise and cogent exposition into habit and offers hope of renewal.