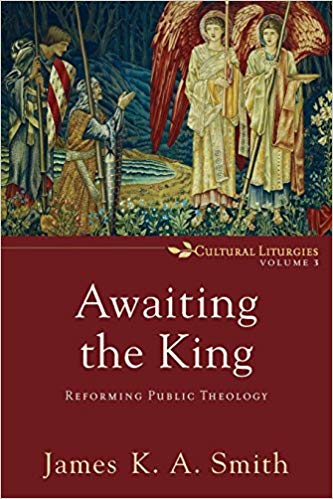 Concluding his series on Cultural Liturgies, James K. A. Smith focuses on reforming public life through the liturgical body of the church. In this third volume, Smith primarily seeks to “work out the implications of a ‘liturgical’ theology of culture for how we imagine and envision political engagement” (8). Secondarily, he hopes “to offer an alternative paradigm that moves us beyond contemporary debates in political theology…in view of, and with a view to, practice” (8). However, his concerns are not mainly with political theology as much as they are with public theology (11). In this sense he desires to redeem the concept of Christendom insofar as it is defined as a “missional endeavor that labors in the hope that our political institutions can be bent…toward the coming kingdom of love” (17).

Smith begins his project by discussing the current state of liturgy and rites in the realm of democracy. In order to deconstruct the liturgy of American democracy in particular, Smith utilizes Augustine’s City of God as a type of lens through which to assess it (a practice those familiar with Smith’s work will recognize albeit with different authors). His concern is that we often overlook the simple ways that our worship becomes more about state than kingdom. He describes this as the ultimate bleeding into the penultimate, or the temporary becoming confused with the eternal. In applying Augustine to modern liberal democracies such as exist in North America, Smith argues that it is a “repertoire of rites that quite successfully form a people to love certain ends and goods” and that their ultimate ends, or telos, is a matter of worship” (51).

He continues his work in chapter two with his proposal that the church is a political body which influences the world. He argues that as much as something as simple as a football game or a visit to a national monument is liturgical, so too the church should be, and is, political (53). As we are “centered in the formative disciplines of the heavenly polis, we are then sent to labor in the contested terrain of creation in the saeculum” (55). Smith utilizes Oliver O’Donovan’s work The Desire of Nations to show that “we need to be immersed in such formative worship in order to curate a Christian political imagination that primes us to see the world through a kingdom lens. On the other hand, the task of a political theology is to make explicit the political vision that is implicit in the scriptural narrative of worship” (66). A major concern of Smith is to push back against a Kuyperian worldview which can create an enmeshed form of engagement which “really values only this world” (85). Instead, we should maintain a differentiated posture which honors our current place in the earthly city as heavenly citizens. We must be careful to not attempt to naturalize shalom and justice as if we could accomplish ultimate justice in this world apart from the intervention of God himself in the risen King, according to Smith.

In Chapter three, Smith highlights the haunting, for liberalism, of Christianity within much of democratic liberalism. In his estimation, our Christian political theology must have an appreciation of “aspects of liberal democracy that are…the fruit of the gospel’s impact on the West and now the world” (95). His plea is that the church is not a place that we hide from society and political engagement but instead it is a “re-centering community of practice that we are sent from” (96). Continuing to use O’Donovan, Smith shows how representative government as a steward of temporal authority is a hallmark of the Christian tradition (101). Smith’s argument is that “the history of Western liberal democracy is one filled with craters from the impact of the gospel” (120). We should appreciate this history and culture as a “determinately ‘evangelical’ political theology” in light of this reality according to Smith (124).

Chapter four brings out and applies Smith’s proposal that Christianity should create and cultivate a pluralistic society. He desires to recapture and reform a Reformed theology that is too at peace with devaluing the word and sacrament in favor of common grace in the world. According to Smith, “if we are convinced (convicted) that in Christ and his Word we know something about how to be human, then shouldn’t we seek to bend social practices and policy in that direction for the good of our neighbors?” He argues that capitalism and liberalism do not have deep enough foundations to support a pluralistic society whereas religious communities, such as Christianity, offer the best bet to preserve a pluralistic society in peace because of its own view that earthly kingdoms are simply stewards of authority and not ultimate authorities.

A main critique Smith anticipates is something that he summarizes this problem as the “Godfather problem.” That is, while we confess and practice liturgies of the church we are at the same time formed by the liturgies of the state. We betray the very allegiance we confess in church with our participation in public life. In concluding and attempting to apply his philosophy of political engagement, Smith highlights several ideas and principles to flesh out his concepts.

Awaiting the King is sure to inspire loyal fans of Smith’s work with a vision for public engagement that is more than abdication (as seen in the Benedict Option) and less than domination (as has been the case especially recently with more popular notions of partnership between evangelicals and politicians). As Smith summarizes in his preface, “refusing both activism and quietism, we face the task of learning how to actively wait in the meantime of the saeculum.” (xii) For anyone interested in learning how to engage politically with winsome and honest Christian conviction, this book will be a boon.

Smith, however, could have provided more application. While his stated desire was to move beyond standard debates and into practice, this reviewer found his practice lacking ecclesial application other than his standard call for a more robust liturgy. As is standard with most of Smith’s work, it is high on philosophy and nuance. It can leave the reader with the impression that political engagement is something reserved for those who know what they’re doing. While Smith does attempt to provide helpful principles at the end of this work, they are so principled as to lose practical application in saeculum itself.

Another weakness of Smith’s proposal is his dogged commitment to liturgical formation as the answer to formational deformities in the Christian life in public theology. He sets his proposal in contrast to those who would propose a more rationalistic or intellectualist approach to formation (202). While one can hardly blame him for sticking to the argument of his entire Cultural Liturgies project, Smith seems to be entrenched in a intellect vs. liturgy line of thinking. A more helpful and nuanced proposal (something which he is more than capable of) which unites the two, appreciating the metaphysical importance of both truth and practice without suggesting the truth as a secondary concern, would improve the argument of this work.

In conclusion, Smith’s work is a welcome read for any Christian seriously concerned with the manner in which evangelicals have been approaching politics as of late. With what Smith may lack in application, he makes up for in a robust proposal for a Christian public theology that is historically rooted, culturally relevant, and helpfully critical of past attempts to engage politically.