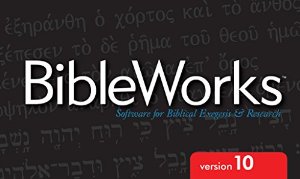 If you want to focus your study on biblical texts, this is the software product for you. And while the prior version 9 was a highly functional and robust product, the new version 10 ups the ante in significant ways. For the unfamiliar, BibleWorks provides everything you need for the close exegesis of the biblical texts in more than 200 Bible translations (virtually all the major English versions are included: KJV, NIV, NKJV, ESV, NASB, NLT, ASV, RSV, NRSV, NJB, NAB, NET, CSB, etc.), plus 40 other languages, and more than 50 original language texts and morphology databases, dozens of lexical-grammatical references, plus a wealth of practical reference works. Instead of providing a loose collection of books, BibleWorks tightly integrates its databases with the powerful morphology and analysis tools.

BibleWorks comes with a highly-configurable user interface, designed to work the way you work. When you are researching a particular topic, you normally progress from searching (words, partial words, and phrases), to browsing the results, and, finally, to analysis of particular words. Other kinds of searches include grammatical, phrase, semantic domain, related verse, and key word in context searches. The interface is laid out in this order with minimal clutter so that your work flow is natural and intuitive. The tabbed search interface lets you pursue several lines of investigation simultaneously, keeping multiple searches open at the same time. As you move the mouse over the Bible text, a wealth of information about the text is instantly displayed in the Analysis window beside the text.

Students can set up the Parallel Versions window to view different texts in parallel columns that can be scrolled independently or synchronously. The Browse window allows toggling between the single version under study and individual verses in multiple versions. You can order the versions any way you prefer, including in multiple languages. Hovering over a verse or word immediately brings up data in a different tab, parsings, notes, etc.

Experienced BW users know about these essential features—and those have remained or been upgraded. As well, there are significant new databases added to the basic package with the option of adding additional ones if your study requires more specialized resources. And, as always, BW connects to the internet so that interim updates of the program as well as databases occur when connected online. Also BW10 ships with a Mac installer so Mac users have virtual complete compatibility and functionality.

As to what’s new, first there is an aesthetic feature that users will appreciate immediately—a new screen layout with the option of choosing color schemes, or devising their own. Users can open or close various columns depending on the need or for a cleaner visual appeal. You can hide and show various tabs and customize how they behave. Screens can be scaled to enhance readability on various devices as well as for video projection. This new version has added a number of default tabs that display various features of the text under study. I like the Forms Tab that allows me to see immediately statistics for morphologically tagged Greek and Hebrew texts. I can see which forms of a lemma occur elsewhere and how they are used. There’s even a search window history button that collects texts that you have viewed for more than a few seconds. You can then go back to find texts that you might want to revisit.

What about databases? First, there are some new images of ancient manuscripts. BW10 contains high resolution images for the entire Hebrew OT (Leningradensis Codex). As you move the mouse over the Bible text, the LC images for the selected verse display on a separate tab. Jan Verbruggen’s Essential Biblical Hebrew grammar has been added. In addition to the Vaticanus and Sinaiticus images (now completely morphologically tagged), Bezae, Alexandrinus, and others, BW10 has added images of Ephraemi Rescriptus and Claromontanus (but no morphological tags yet) and the Byzantine Greek New Testament from the Center for the Study and Preservation of the Majority Text. For those who want more original language tools, there are now two add-on packages: Stuttgart New Testament edition and Stuttgart Old Testament edition. All the other databases for the NT have been updated to correspond with the new NA28. The Gospel of Thomas is now included.

There is now a built-in EPUB reader so that users can read EPUB files, manage libraries of EPUB files and read them in a separate tab while other texts are open. BW 10 includes a new Holy Land Picture database covering both OT and NT sites. The ESV concise Bible atlas is a helpful addition. The program can now “read” the NA27 Greek text to you: in fact two audio versions of the Greek text are included. A concise Greek-English lexicon of BDAG has been added to the others previously available.

BibleWorks keeps getting better with each new version. I am a faithful user. I can’t imagine doing my work as a scholar and teacher without this tool in my study and in the classroom.