Camels in the Biblical World 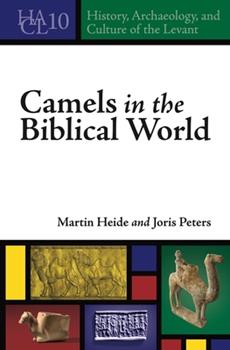 The purpose of this review is to make readers aware of the appearance of this important work.  At the same time, it serves to bring up to date and to answer some of the issues appearing in a recent discussion on the Denver Journal.  See the 2020 volume and the double review entries there of:

Camels appear throughout the Old Testament.  A thorough study of all the textual and archaeological evidence provides has long been a need in the burgeoning corpus of realia research on the Bible.  While readers will find some aspects of the work challenging, this text provides an essential reference tool for the subject.  One of the issues in terms of camels and the Bible has been the position that there were no domesticated camels before the first millennium BC. Therefore, the references to camels in Genesis 12-37 should be seen as anachronistic in terms of the claims to having domesticated animals in the early second millennium BC.

The discussion of camels must now consider the joint, comprehensive work of two scholars, Martin Heide and Joris Peters.  Heide is Associate Professor of Semitic Languages at the Center for Near and Middle Eastern Studies, Philipps-Universität Marburg. Peters is Professor and Chair of Palaeoanatomy, Domestication Research and the History of Veterinary Medicine at the Ludwig-Maximilians-Universität München. They have published Camels in the Biblical World (History, Archaeology, and Culture of the Levant 10; University Park: Eisenbrauns, 2021).  It is not possible to summarize all the lexical, literary, iconographic, and archaeological evidence that the authors do in their 400-page volume.  Indeed, the skills required to accurately evaluate such a work are beyond the abilities of all but a few.  A brief statement of the work of Heide and Peters, with some helpful illustrations, is available on the ASOR site, ANE Today: https://www.asor.org/anetoday/2022/09/camels-biblical-world

Here it is important to note one or two points about the question of camels in Genesis. I begin with a critical distinction. The dromedary is not synonymous with the camel.  This is very important because discussions about appearances, or lack thereof, of the dromedary do not exhaust the question of the presence of camels. The dromedary is the one-humped camel, also called the Arabian camel.  The other “species” of camel is the Bactrian camel, which according to Heide and Peters, was attested in Sumerian lexical texts already in the third millennium BC  It emerged from Central Asia and was used in trade westward into Mesopotamia, where, by the time of the mid-second millennium BC it was designated as (Sumerian am.si.ḫar.ra.an) “elephant of the caravan,” and later (into the first millennium BC) also as (Sumerian am.si.kur.ra) “elephant of the mountain.”  It appears in lexical lists, in a love song addressed to Dumuzi, in an incantation, in one or two proverbs, and “presumably” in an administrative letter; but it does not appear in contemporary administrative or commercial lists.  The Akkadian word, ibilu, is the equivalent used for these Sumerian terms.  It is also used, along with gammalu, for the dromedary which occurs in the lexical lists as (Sumerian anše.a.ab.ba) “donkey of the Sealand.”  This term appears first in the latter part of the second millennium BC.

Regarding the Bactrian camel and its appearance in Genesis texts, see the quote on pp. 302-3 of Heide and Peters’ work:

“Turning to the Genesis narratives, the ultimate mention of camels (Genesis 12, 24) takes us to the Haran region in Aram-Naharaim (§4.2).  The Genesis narrator, if indeed referring to historical incidents from the second millennium BC, informs us that Abram left upper Mesopotamia early in the second millennium BC (§4.2.1), at a time when Bactrian camels had already been employed in distant overland trade for centuries.  The life story of Abram thus coincides with the mention of am.si.ḫar.ra.an and am.si.kur.ra camels in cuneiform sources. In Abram’s story, camels are mentioned ones as his property (§4.2.1.4) and – significantly – on several occasions in connection with long journeys.  These include the one of his servant to Aram-Naharaim (§4.2.2) and that of his grandson Jacob traveling with a small camel herd from Upper Mesopotamia to Canaan (§4.2.3). In Abram’s lifetime, camels seem highly prized for carrying considerable loads long distance, but at the regional scale, donkeys remained the main means of transport in Bronze Age economies (§4.2.4-4.2.5).”

When one takes into consideration all the evidence, both archeological and literary, one sees a peripheral but attested presence of domesticated Bactrian camels in the ancient Near East at the time traditionally assigned to the narratives of Genesis 12-37.

For the study of camels, this volume is highly recommended as the most current and thorough work of research available.  The Bible reader will learn much about every aspect of camels.  For example, to what do the forty camels in 2 Kgs. 8:9 refer?  Heide and Peter (pp. 272-73) compare “a load of mules” in 2 Kgs. 5:17, and suggest that the reference to forty camels may have been a means to “measure substantial amounts of trade goods in Damascus,” an international caravan commercial center, i.e., “a forty-camel load.”  The reader will also become better informed about the portrayals of camels in the prophets, especially Isaiah and Jeremiah.

On October 24, 2022, I had some exchange with Martin Heide, co-author of the book Camels in the Biblical World, about his opinion on camels in Genesis.  His helpful response is reproduced here:

“Sapir-Hen & Ben-Yosef’s article from 2013 (TA 40, pp. 277–285) is sometimes cited as ‘proof’ that an individual like Abram could not have camels at the beginning of the 2nd millennium BCE. However, what Sapir-Hen and Ben-Yosef’s thoroughly researched study really demonstrates is that dromedaries were not engaged as pack animals prior to the 10th century BC on an archaeologically measurable scale; ‘significant appearance,’ as they call it. These camels did not belong to pastoralists wandering through the Levant but were exploited in copper mining.

Now, there is a lot of debate as to whether Abram/Abraham could have existed at all, etc. Leaving this aside for the moment and focusing exclusively on the question of whether camels were domesticated before the 10th century BCE, this question can be answered unequivocally in the affirmative for the following reasons: 1. Two-humped camels were domesticated by the middle of the 3rd millennium at the latest in regions east of the Zagros mountains; 2. Domestic two-humped camels have been known in Mesopotamia from the end of the third / beginning of the 2nd millennium onwards; 3. Camels were not primarily bred to ‘stay at home,’ but were used to cover vast distances in trade and transport. The end of the 3rd / beginning of the 2nd millennium BCE is known as a period with many long- distance interregional trade contacts. After all, there could well have been individuals that wandered around between Mesopotamia, the Levant, and Egypt with their sheep, cattle, and donkeys, and who had also acquired some two-humped camels in Mesopotamia, directly or via intermediaries. However, as such an individual (or any pastoralist taking advantage of these wonderful animals) did not exploit many camels in hard labor in a specific area over an extended period of time (such as in copper mining), nor engage in intensive overland trade with other regions from a particular location (cf. the finds of Tell Jemmeh), finding any camel remains would be very unlikely.“