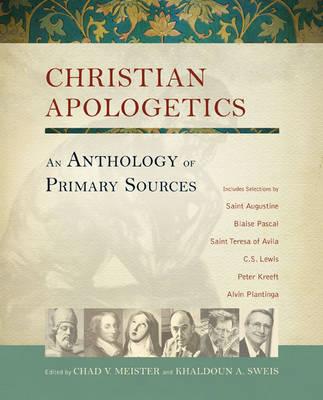 This extensive work is needful and helpful to the mission of extending the knowledge of the one true God to this fallen world; but it is also seriously lacking in several key areas—an odd combination, it seems. No book is perfect, spare Scripture, but a book that attempts to be a major anthology of the history of Western apologetics should have been more carefully thought out. Of course, there were also tough space limits to consider, but, to my mind, these could have been handled more wisely.

Of course, every anthology, encyclopedia, handbook, and dictionary suffers from the constraints of abridgement. Only God, the Omniscient One, knows all things from every angle and from every context. We mortals, especially east of Eden, labor under the limits of partial knowing, ignorance, trivia, and outright errors. For us, everything is an abridgement of sorts. Abridgement, while necessary, is difficult, and often vexing. Thus, one should be chartable in reviewing such works, but the reviewer cannot help but consider the ideal in this daunting task of synopsis.

The church and the world needs to know that apologetics is not an esoteric discipline for eggheads, but vital to the witness of all Christians. This work makes that known through its anthologized materials, general introduction, and its introduction to the eleven individual sections. The authors include both Roman Catholic and Protestant apologists (but leave out contemporary Easter Orthodox apologists such as Father Seraphim Rose). The Apostle Paul’s apologetic in Acts 17 wisely leads off the book. But the apologetics of Jesus himself finds no place. Dallas Willard, James Sire, and J.P. Moreland all make compelling cases that Jesus was a philosopher, thinker, and apologist. John Piper also defends Jesus against the charge of anti-intellectualism in his largely exegetical book, Think (Crossway, 2011). Selections from Matthew 22 would have strengthened the book considerably. Here Jesus engages in three theological-apologetic arguments. Moreover, the Hebrew Bible is not lacking in apologetic material, even at the very beginning of Genesis, which presents a polemic against neighboring pagan cosmologies as Gerhard Hasel and others have noted.

Christian Apologetics is also helpful in that it covers all the main topics in apologetics, including two areas often sadly ignored. The first is interreligious apologetics, which is represented in a fine essay by one of its greatest contemporary proponents and philosophers, Harold Netland. Second is the last section, “Christianity and the World,” which addressed the Christian’s response to culture as part of apologetic engagement. I was particularly happy to see a section from Francis Schaeffer’s prophetic work, A Christian Manifesto (Crossway, 1981) included in the entries. James Beilby writes a competent (if brief) overview of apologetics systems, but neglects to treat the cumulative case method—which commands a pretty broad following today—as an apologetics system in its own right. The book should be praised for providing footnotes (which are far more convenient than endnotes), bibliographies, an extensive index, and questions for further study at the end of each section. Thus, it is strong textbook material. But now to some rather significant errors and omissions.

The introduction nicely explains the nature of apologetics, its importance, and sets up the rest of the book. But I discern an epistemic-theological error that is distressingly pandemic in apologetics books. The claim is made that apologetics (no matter how rationally powerful) can only take the unbeliever “so far.” It can remove obstacles and commend the Christian worldview as rational, but it is the Holy Spirit who must bring people to the point of conversion. This view, while common, presents a false dichotomy that is, ironically, based on anti-intellectualism and poor pneumatology.  The Holy Spirit, according to Jesus, is “the Spirit of truth” (John 14:16-17, 15:26, 16:13). Jesus himself, filled perfectly with the Holy Spirit, came to “make the Father known” through his deeds, character, and words, including arguments (as mentioned above). Therefore, there is no reason to exclude the Holy Spirit from working in and through good apologetic arguments. The Apostle Paul, while discussing church discipline and errant theology, said this about the nature and power of arguments:

For though we live in the world, we do not wage war as the world does. The weapons we fight with are not the weapons of the world. On the contrary, they have divine power to demolish strongholds. We demolish arguments and every pretension that sets itself up against the knowledge of God, and we take captive every thought to make it obedient to Christ (2 Corinthians 10:3-5).

While Paul does not explicitly mention the Holy Spirit in this passage, his statement makes no sense without the assumption that one must fight these spiritual-intellectual battles in the power of the Holy Spirit, the “Spirit of Truth,” in Jesus’ words. Therefore, one should not exclude the Holy Spirit from the work of apologetics itself. The Spirit woos souls (through argument and other means) and the Spirit brings people to conversion; it is a both/and, not an either/or. The one who reaches the point of trust in the truth of the gospel need not then take an irrational or even non-rational leap beyond the evidence or arguments.

There is also a documentation problem. It is not obvious in all cases which essays are unique to this work and which are taken from previous publications. One has to infer this. For example, John Warwick Montgomery’s fine essay on the history of apologetics is not listed in a footnote as having appeared first anywhere else. Other essays obviously are (such as the work of Aquinas and Anselm), and some essays mention in a footnote that they are taken from or adapted from other work. However, it would have been more professional (and convenient) to state which essays premier in this book. That is the scholarly convention and there was no reason to avoid it, to my knowledge.

While most sections are representatively adequate, at least two sections are lacking. The section on science and Christianity is not sufficiently represented. The simple reason is that no spokesperson for the Intelligent Design movement is included. Intelligent Design proponent Michael Behe’s argument for irreducibly complex systems in the cell is a part of the section on the argument for design, but this does not emphasize the conceptual relationship of Christianity and science proper. An essay by William Dembski (one of the most well-credentialed and brilliant Christian philosophers of our day) would have been apropos, given his deep theoretical understanding of design detection, the nature of science, and the importance of high-level apologetics. Of course, he may have been approached to do just that, and had to decline. (I have had to do this myself a few times.) Nevertheless, another stellar philosopher such as Stephen Myers could have written that kind of essay. Or, the editors could have included a piece by the father and long-time leader of the Intelligent Design movement, Phillip Johnson, whose effect on contemporary apologetics is incalculable. But he appears nowhere in the volume. Second, the section on the argument from design, omits the information argument argued magisterially in Dr. Meyer’s work, The Signature in the Cell (2009) as well as in the work of Werner Gitt (In the Beginning was Information.) The information argument is perhaps the strongest and most scientifically-credentialed argument from design in the history of Christian apologetics. Yet it receives no treatment at all. This is deeply lamentable.

Another infelicitous omission is the exclusion of Pascal’s anthropological argument, which is both historically rooted in the famous Pensées and which has been revived by contemporary thinkers such as Thomas Morris, Kenneth Samples, and Robert Velarde. Of course, Pascal’s wager is included (as it always is in these kinds of collections), but it not put in any kind of apologetic context. This is sadly typical of anthologies that present it. Worse yet, it is placed in the section called, “The Existence of God.” But it is not such an argument; rather it claims that belief in God is prudentially rational, given the stakes at hand. The editor’s introduction to this section calls it a “pragmatic argument for belief,” which is not far from the mark, yet the wager does not belong in the section to which it was extradited.

Two chief epistemological arguments are silenced as well: Alvin Plantingas’ “evolutionary argument against naturalism” (summarized in Warranted Christian Belief [Oxford, 2000]) and the argument from rational inference, offered most famously by C.S. Lewis in Miracles, and which has been more recently refined and brought up to date by the yeoman work of Victor Reppert in C.S. Lewis’s Dangerous Idea (InterVarsity Press, 2002). The anthology does include a conceptual cousin of these arguments called “the transcendental argument” (made famous by Cornelius Van Til) by way of a debate between the brilliant presuppositionalist Greg Bahnsen and the rather clueless, but militant atheist, Gordon Stein. This is instructive, but it is not apologetic engagement at the highest level. If the editors wanted to present an apologetic debate, they should have chosen a transcript from one of William Lane Craig’s many debates with atheists.

Since this book purports to “an anthology of primary sources” that covers the history of apologetics (and without a methodological agenda), it is exceedingly strange that four of the most significant apologists of the twentieth century are missing: Cornelius Van Til, Gordon H. Clark, Carl F. H. Henry, and Edward John Carnell. While all four forswore natural theology, they excelled in negative apologetics and epistemological arguments against naturalism and theological liberalism. They are historical figures worthy of at least some note in this discipline.

During the past forty years or so, Christian apologists have thoroughly engaged the pantheistic monism (or nondualism) of New Age philosophies. Therefore, some vintage material from the likes of Os Guinness (The Dust of Death [InterVarsity Press, 1973]), James Sire (The Universe Next Door [InterVarsity Press, 1976; and subsequent editions]), Gordon Lewis (Transcendental Meditation [Regal, 1975]) or David Clark and Norman Geisler (Apologetics for the New Age [Baker, 1990]) would have been fitting. While pantheism is typically propounded in America more in the popular press than in the academic setting, it is not without its more thoughtful proponents, such as the prolific, if unconvincing, Zen Buddhist system-builder, Ken Wilber.

One mistake of commission is the inclusion of John Hick’s soul-making theodicy in the section on the problem of evil. The problem is not that the essay is entirely off-base, but that the anthology seemed to be limited to orthodox apologists, whether Roman Catholic or Protestant. Hick was neither. Thus, the inclusion of his work may confuse some readers. Certainly, an evangelical apologist could have been inducted here. Further, no Calvinist approach to the problem of evil was included. A contemporary evangelical philosopher such as John Feinberg or Winfried Corduan could have provided a fine essay. Less to my liking, but still in the Reformed tradition are the approaches of Gordon Clark (from Religion, Reason and Revelation [Craig Press, 1961]) and John Frame (in Apologetics for the Glory of God [P&R Publishing, 1994]).

One may be tempted to take these critical comments as the curmudgeonly snipes of an old apologist who was not asked to be an editor! Perhaps (some of them) are just; nevertheless, after thirty some years of teaching and writing on the subject, I cannot fail to call attention to them. Notwithstanding, the student of apologetics will find in Christian Apologetics many very important works of some of the best minds in the history of Christianity all hard at work “contending for the faith given once for all to the saints” (Jude 3; see also 1 Peter 3:15). Let us all be inspired by this work and continue the world-changing ministry of making the one true God known to the entire planet before it is too late (Psalm 90:12; Matthew 28:18-20; Ephesians 5:16; James 4:13-17).