Christian Women in the Patristic World 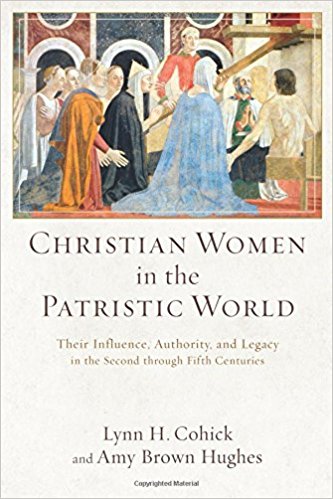 As they say, the winners write the histories, and the elite comprise the writers. As a result, more often than not, throughout history males have been the elite authors. That means that most of what we know about ancient history, particularly, has come to us through the writings of men. All the more significant, Cohick and Hughes contend, then, that the lives and contributions of certain women were so crucial that elite males were constrained to record what these women accomplished. This book catalogues some of those important women in the patristic period (from the second to the mid-fifth century). Cohick chairs the New Testament department at Wheaton College and previously published Women in the World of the Earliest Christians (Baker, 2009). Hughes is an assistant professor of theology at Gordon College.

The authors write an extremely well-researched and well-documented account of very important women. The bibliography extends to seventeen pages, divided into primary and secondary sources. Cohick and Hughes also include thirty-two illustrations scattered through the chapters (art work, figures, icons), as well as a very useful time line of the major persons and events from the “Acts of Paul and Thecla” (ca. AD 150) to the Council of Chalcedon (451). Some of their subjects are so crucial to merit their own chapters (e.g., Thecla, Helena Augusta, Egeria), while others are treated together—two or three usually in some chapters—because they overlap in time or the nature of their accomplishments. I confess that I had not even heard of some of these women, so reading this book was an enjoyable education for my (all too sketchy) understanding of the significant players during the Patristic period.

Who were these women and what roles did they play? We find preachers, philosophers, several martyrs, empresses (including Constantine’s mother Helena), and travelers on holy pilgrimages. Many were virgins; some were mothers (including Augustine’s mother Monica); many were ascetics; others were entrepreneurs. For example, Helena opened the treasury of the empire to locate and build churches in the Holy Land–exerting considerable weight to spreading the geographical extension of the Roman Emperor and thus Christianity. Others embraced the monastic life and influenced many others who followed their examples of piety.

Their stories are recorded or embedded in various written works and genres, but also on the walls of the catacombs and in impressive mosaics. These women also left a legacy in devotional practices and components of liturgical cycles that continue their impact on some Christians to this day.

The book starts with an introduction that includes several helpful sections. The authors answer the question, “Why we wrote this book” (answers: personal quests to understand the roles of women in history; the development of recent scholarship that has opened up research into this period as never before). They wish to take a positive, analytical approach that does more than other works that “lament and dismiss the church fathers as hopelessly misogynistic as well as those that take a naive, pious perspective on the evidence” (p. xxii). They wish to advocate for these ancient women but also show the often uphill battle they faced in pursing their goals in their contexts. They wish to bring a close contextually-nuanced reading to their analyses of their subjects though they confess their task is made difficult by the fact that we have so few examples of sources actually written by women. They aim to show, nevertheless, that women managed to exert considerable influence—even theologically—through the avenues that were open to them, the avenues in which Cohick and Hughes pursue their research. They go so far as to allege that “women’s theologizing is fundamental to the development of Christian thought and should not be relegated to the fringe or regarded as a concession prize at best. Women were key in the central discussions of trinitarian theology and Christology, for example” (p. xxvii).

The ensuing nine chapters proceed chronologically to unpack the stories of these women amidst the growing Christian movement. Thecla and Perpetua were martyrs who left a huge legacy in their unwavering devotion to Christ. Egeria and Helena set out on pilgrimages. Monica prayed for and engaged in philosophical discussions with her son Augustine. Macrina, the monastic, influenced her brothers Gregory of Nyssa and Basil of Caesarea. The two Malanias, Paula, and Marcella abandoned the wealth of their aristocratic families and took up lives of asceticism. Empresses Pulcheria, sister of emperor Theodosius II, and his wife Eudocia, influenced the most important church councils.

I hope this brief introduction will whet the appetites of those who are to this point ignorant of the crucial role that women played in the centuries immediately following the writing of the New Testament. Patriarchalism certainly dominated the church and its world in these early centuries, but I think it unwise to conclude that women’s influences were rightly curtailed; that was simply the way things were. While the patristic world was thoroughly male-controlled, these women (and perhaps others we have no way of knowing about) found ways to exert enormous influence—and positively so! We may have heard of or even read the Church Fathers; we are aware of the Desert Fathers. Some may recognize that there were also significant Desert Mothers. Cohick and Hughes show us that there were many women (church mothers, if you will) whose roles were prominent and significant in the development of the theological beliefs and practices in the earliest centuries of the church age, and whose influences we still appreciate. I highly recommend this book both for what it teaches about these prominent women, but also for the light it adds to our understanding of the many political elements that went into the establishment of the early church, its extension in the world, and its beliefs. The book is also an excellent primer on historiography: Cohick and Hughes demonstrate how it should be done.