Contact with Reality: Michael Polanyi’s Realism and Why It Matters 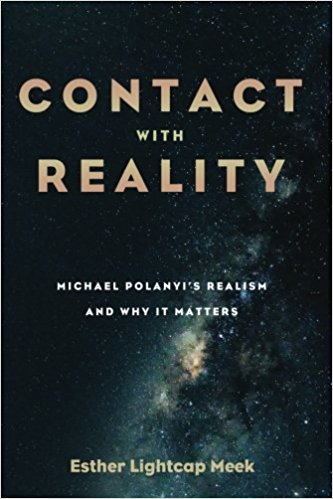 Esther Lightcap Meek serves as Professor of Philosophy at Geneva College. This, her latest publication, represents an updated and expanded version of her 1985 Ph.D. dissertation at Temple University. Meek has become a leading interpreter of the world-renowned Hungarian chemist, turned philosopher, Michael Polanyi (1891-1976) and his epistemology. Meek’s work is particularly valuable for those interested in the implications of Polanyi’s thought for Christian faith and, specifically, for theological epistemology. Across the spectrum of her publications she ably engages Polanyi’s thought, with something to offer both the specialist and the thoughtful, general Christian public.

While Meek’s philosophical background and the focus of her book could situate a review within the discipline of philosophy, this review will instead represent a more theological perspective, and for three reasons. First, though Michael Polanyi did not articulate his epistemology with explicitly theological interests in view, his work had significant influence on the thought of the eminent Scottish theologian T. F. Torrance. Readers with even a modest exposure to Torrance, his students, or his way of doing theology will have come across Polanyi’s name and will sense the far-reaching theological implications of his epistemology.

Second, Meek’s work is clearly compelled by how she understands Polanyi’s thought to animate theological questions that, directly or indirectly, are central to Christian faith in daily life. Her 2011 work Loving to Know constitutes a personal summa in which, drawing upon her own life and faith journey, she places Polanyi’s thought in conversation with the epistemological emphases of, among others, theologians such as John Frame and Colin Gunton. In that work she captures her resulting, integrated epistemology in the phrase “covenant epistemology,” which is also the subtitle of that book.

Third, American evangelicalism has for generations been resourced by theological work that accords only minimal attention to theological method. Yet, the methodology operative within many of evangelicalism’s recognized, respected theologies reflects the type of epistemology that Polanyi found problematic in his own mid-twentieth century scientific guild. Thus, Polanyi’s work deserves a hearing within American evangelical theological circles where the epistemological assumptions that drive its theology are under-examined and perhaps uncritically accepted.

Meek divides Contact with Reality into two major parts. Part One (over two-thirds of the book) is essentially her doctoral dissertation in which she offers an exposition and critical examination of Polanyi’s epistemology. That epistemology can be captured cryptically by Polanyi’s phrase (and the title of the first chapter in part one), “personal knowledge,” which is also the title of one of Polanyi’s most well-known works. Though some may fear that this phrase signals a dangerous subjectivity, relativism, or experientialism, Meek shows how for Polanyi personal knowledge goes hand in hand with realism—the crucial epistemological commitment that reality exists, that it exists independently of the knower, and that it is knowable. Part Two represents Meek’s updates to her original argument, along with contemporary reflections on why Polanyi’s epistemology matters for pressing questions of “contact with reality.”

Meek’s coverage of Polanyi may not be exhaustive, but it is certainly extensive and detailed—far too much to cover adequately in a review. In chapter one Meek provides a summary introduction to Polanyi’s epistemological project; a framework in which the more exacting aspects of his thought can be situated and thus apprehended. She states, “Polanyi will argue that apart from personal epistemology as he describes it, not even knowledge is possible, let alone realism. Positively, he will view realism as integral to personal knowledge and vice versa” (17). In order to grasp what Polanyi means by “personal knowledge” and how that relates to realism, Meek unfolds Polanyi’s contention that the term “objectivity” applies to that which is known, not to the process, conditions or nature of knowledge. He rejects the notion that all knowledge (particularly, the most significant and deepest forms of knowledge) is explicit, that is, “that all knowledge consists of pieces of information immediately present to the mind and impersonally transferable from one mind to another. Polanyi claims that explicit knowledge is the ideal of contemporary science: it is derived from mechanics and aims at a mathematical theory connecting tangible, focally observed objects in such a way that everything is above-board, open to public scrutiny, and wholly impersonal” (20-21). This claim centralizes the rest of Meek’s exposition of Polanyi and culminates in her observation that for Polanyi, “If knowledge is wholly explicit, there can be no learning, no discovery, and thus no scientific knowledge” (21).

The remainder of Meek’s presentation of Polanyi revolves around several key assertions. While each of these deserves and receives considerable explanation, these points will orient readers to further, fruitful exploration of his thought.

Students of epistemology will be interested in Meek’s comparison of Polanyi’s realism with the nuances of other contemporary versions of realism: metaphysical, semantic, epistemic, empirical, and pragmatic. These comparisons helpfully demonstrate that “realism” is not a monolithic epistemological category even though it may appear so, having gained a measure of popular exposure under the title “critical realism,” thanks to the work of Alister McGrath, N. T. Wright, and others. Meek also shows how Polanyi’s realism relates to and in some ways corrects a variety of other epistemological approaches, from correspondence theory to Thomas Kuhn’s appeal to paradigms. Through an entire chapter devoted to phenomenologist Maurice Merleau-Ponty and, subordinately, Martin Heidegger, Meek shows how Polanyi’s realism relates to contemporary, influential thought on subject-object relations.

The contemporary implications of Polanyi’s epistemology that Meek draws out in Part Two are especially accessible and beneficial. She states her personal conclusion that the “IFM Effect” (“indeterminate future manifestations”) “is the signature of reality just because reality has its source in an endlessly generous and exuberant God” (242). She goes on to claim, “Best epistemic practices, then, are those that best cultivate interpersonal relationship: love, pledge, invitation, indwelling—it is easy to develop an extensive ‘epistemological etiquette.’ The act of coming to know (discovery) is transformative encounter” (243).

Meek shows how Polanyi’s realism makes sense of the epistemology used by all people in everyday life. It is not an epistemology that makes sense only in academic inquiries or philosophy courses. “You cannot see the real by focally fixating on its particulars” (246). This is as true in riding a bicycle or picking out a person’s face in a crowd as in complex experiments. We can never achieve genuine knowledge, even in supposedly technical research enterprises, without appropriately giving ourselves to—indwelling—and risking. Meek goes so far as to assert, “Not only is there no view from nowhere; the view from nowhere is intrinsically anti-realist. Personal indwelling of the clues is the window to the real” (246).

In concluding her work, Meek engages thinkers who have more recently contributed to the realism/anti-realism conversation—Richard Rorty, Hubert Dreyfus, and Charles Taylor—to show how Polanyi’s realism addresses the concerns and approaches put forward by each. Fittingly, she concludes with reference to Hans Urs von Balthasar, whose theological epistemology parallels Polanyi’s scientific approach to illustrate that reality—as God’s reality—is marked by excess and enables our knowing process to include surprise and delight. Reality always exceeds our epistemological capacities even as it gives itself to us. Knowledge, thus, can mystify and intrigue us at the same time that it informs and equips us. For these reasons Esther Lightcap Meek has given a valuable gift in connecting Michael Polanyi’s epistemology to the wide span of Christian concerns, from the daily and “ordinary” to the technical and philosophical concerns of the academy.

The only caveat worth mentioning is that this book will be read most fruitfully by those who have first read Polanyi directly, at least his two primary works: Personal Knowledge and The Tacit Dimension. Evangelicals whose epistemological habits have been influenced more by versions of analytical philosophy may need patience and a long runway to appreciate what Polanyi was trying to do, including appreciation of the epistemological problems he sought to address. Whether one finds Polanyi (and Meek) convincing may depend on (1) the willingness to acknowledge that no single philosophical tradition owns the epistemological conversation and (2) the extent of recognition that epistemologies must be judged on how they work in the entire scope of human existence and not merely in the isolated realm of abstract formulations. In this light, Esther Lightcap Meek’s Contact with Reality provides a welcome and much-needed apologetic for an epistemology that encompasses but extends far beyond the narrow interests of specialists, drawing readers into the animating relationship between how we know and the God whom we know. On this connection hinges all that matters in life.