Corporal Punishment in the Bible: A Redemptive Movement Hermeneutic for Troubling Texts 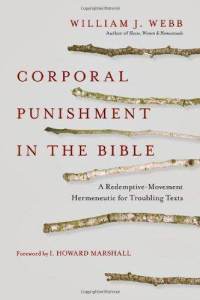 To spank or not to spank? This is one of the most highly polarizing questions for parents today. Polls indicate that sixty five to ninety percent of Americans spank their children, yet critics are quick to point to studies that demonstrate long term negative effects of spanking and extreme cases of child abuse resulting in death at the hands of parents “disciplining” with the rod.  Biblical passages that commend corporal punishment (herein referred to as CP) are cited both by pro-spankers as the basis for the practice and by detractors as evidence that Christian ethics are outdated and even dangerous. What the Bible really says about CP is not only something parents should care about. All Christians who face the charge of participating in a religion of violence must carefully consider how to understand and apply difficult Old Testament passages.

William Webb is no stranger to controversy and in his most recent release he weighs in on the spanking debate. Using the same redemptive-movement hermeneutic that he developed in his 2001 work, Women, Slaves, and Homosexuals: Exploring the Hermeneutics of Cultural Analysis, Webb argues that Christian parents should not spank their children. He believes alternative methods of discipline better embody “the redemptive spirit” of Scripture by moving beyond the “concrete-specific teaching” toward an “ultimate ethic.” Christian pro-spanking advocates, likes James Dobson, Andreas Köstenberger, Al Mohler, Wayne Grudem, and Paul Wegner have already “unwittingly” moved beyond the Bible in the application of CP texts in seven important ways, according to Webb; demonstrating an implicit adherence to his interpretive method.  The guidelines set forth by Christian pro-spankers and organizations such as Focus on Family limit the age of a child as well as how many times, how often, where on the body, and with what the child is spanked. Further the emotional disposition of the parent administering the discipline is regulated and bruising, welts, wounds and permanent injuries are completely prohibited. These standards differ significantly from the various texts on CP cited from both Torah law in Deuteronomy and Exodus and wisdom literature in Proverbs. Webb believes that pro-spankers “have clearly abandoned the instructions of Scripture they claim to be following…”(p.32), but justifiably so as the “static or frozen-in-time” interpretations would result in parents angrily abusing their children on a regular basis for minor infractions. He repeatedly points out that pro-spankers are unclear on their reasons for “moving beyond the Bible biblically,” (p. 28) and offers his redemptive-movement hermeneutic to explain their departure.

To introduce the details of his hermeneutic Webb refers to the slavery example he developed in his earlier work, which has come under considerable scrutiny by a wide spectrum of evangelicals since its publication. His model requires that that readers approach Scripture with a detailed knowledge of the cultural setting in which the text emerged in order to appreciate its redemptive spirit. Given the brutal conditions of both the Ancient Near East and the Greco-Roman world, a marked contrast is evident with biblical mandates on slavery. The reader gains insight into a trajectory that will lead to an “ultimate ethical application” for the contemporary setting. Webb also cites the canonical context as a factor to consider when searching for meaning. In the case of slavery texts, he argues that both the Old and New Testaments demonstrate a superior ethic compared to the surrounding culture and that a progressive movement toward the abolition of slavery is apparent in Scripture. Few would disagree with his conclusion. However, Webb does not see the impetus for abolition coming for the New Testament itself (though many argue that it certainly exists – 1 Cor 7:21-22; Gal 3:28; Phlm 16, 21). Rather, the abolitionist leanings that are hinted at in the New Testament must be developed further by the astute biblical interpreter who can trace a logical and theological course from the text to the definitive meaning. Apparently God, in his divine wisdom, realizes that deeply embedded social institutions are difficult to radically change and so he moves people step by step in the right direction so as to avoid disturbing their conventions.  While progression of both revelation and redemption is integral to evangelical theology, one wonders how Christ cleansing the temple with a whip or His scathing criticisms of the established religious order accords with Webb’s view. Did God condone slavery and child abuse to accommodate the social institutions of His covenant people?  Webb’s emphasis on a detailed understanding of historical-cultural contexts is commendable. However, if this research not only aids our interpretation but also determines the “ultimate ethic,” can we ever have enough certainty about our archaeological findings to have confidence in what God is telling us?

Webb next turns his attention to the relevant corporal punishment texts in the Old Testament and looks for a biblical basis to explain the seven-point departure from biblical instructions on spanking discussed earlier. He argues the relevant texts demonstrate a redemptive-movement meaning that points toward “better or improved treatment of children” (p. 77). Ample data from the Ancient Near Eastern context supports the notion that Scripture shifted Israel toward a less severe administration of punishment, thereby demonstrating greater respect for human dignity than her neighbors. He also argues that the principal of abstraction, widely used as a part of the historical-grammatical approach, should be applied to CP texts and will lead to the conclusion that parents should not discipline their children with spanking. Finally, Webb addresses the purpose and meaning of passages. He suggests that a concrete-specific teaching can be abandoned so long as the purpose of the instruction is achieved by some other means. These bases provide an adequate case for the improved treatment of children under current pro-spanking guidelines, but also demonstrate that more work is to be done.  Just as adult corporal punishment, which is prescribed in Scripture, has been replaced with punitive measures that focus on restoring losses to the victim rather than destructive mutilation or beating, Webb argues that his redemptive-movement hermeneutic obligates parents to use “non-violent” means to discipline their children. In doing so, they convey a sense of justice that reflects the Christian value of redemption and the future hope of complete restoration. Though Webb depends on this argument from analogy to support his case against spanking children, never mentioned is the utter failure of correction facilities for adults in the Western world to remedy social ills or inhibit criminal behavior. Perhaps Webb begs the questions by assuming that the adult corporal punishment has been rightly abandoned. Whatever the case, it appears that Webb’s method of using cultural contexts to discern the “ultimate ethic” of Scripture fails to fully appreciate the concept of biblical redemptive history.

Webb deals specifically with three further objections to his approach made by Andreas Koestenberger in an appendix. Koestenberger claims that Webb turns the pro-spanking position into a straw man argument by assuming a false dichotomy – either one accepts a rigid literalist interpretation of Scripture that endorses slavery and child abuse or one accepts the redemptive-movement hermeneutic. While Webb affirms that the underlying motivation of pro-spankers is loving correction, he questions why their softening of CP (corporal punishment) texts should stop short of an exclusively non-corporal means. Webb’s question is an important one, for how does one set limits on a redemptive trajectory discovered by a biblical scholar? If the Bible does not speak the final word and we are left to chart the course ourselves, how do we know where to stop? Koestenberger’s objection that the assessment of CP texts fails to be make genre distinctions between Torah Law and wisdom literature is addressed by Webb. He concludes that such distinctions are unnecessary given an assumed fluidity between ideas and application of CP in the public and private spheres in the Ancient Near East. While Webb may be correct in assuming that Torah law punishment likely influenced discipline in the home, it does not follow that these texts can be treated in the same manner. Though similarities in application may be present, the authorial style, intent, and purpose of Torah law are different than wisdom texts. Further, Christ’s atoning death on the cross and his resurrection have different implications for each genre. So to lump the texts together excludes one from the “canonical context.”

Perhaps a sophisticated pro-spanking apologetic for their exegesis of CP texts is absent because many simply interpret all of Scripture and redemptive history in light of Christ (Heb 1:1-2). “Principalization” according to grace is necessary for some texts like Proverbs, complete reinterpretation is required for much of the Law (Heb 8:6-13), and others texts stand essentially intact, like the Decalogue. Whatever the strategy required, what remains foundational for believers seeking wisdom for application is not a sense of the redemptive-movement spirit, but the presence and work of the Holy Spirit. Webb’s approach helpfully reminds us that we live in the tension of an “already, not yet” eschatology; the kingdom age has been inaugurated by Jesus, but will not reach its completion until he comes again. Yet it fails to anchor biblical interpretation and application to the reality of Christ as the fulfillment of all of history. The search for a better understanding of Scripture’s meaning for today under the guidance of the Holy Spirit is an admirable task and William Webb has proposed a nuanced and sophisticated hermeneutic that takes seriously the challenge of applying difficult passages in grace and love. Parenting is one of life’s most rewarding and difficult ministries. We all do well to seriously consider the ethical and hermeneutic questions raised by this significant work of scholarship as stewards God’s precious blessings.