Creation, Nature and Hope in 4 Esra 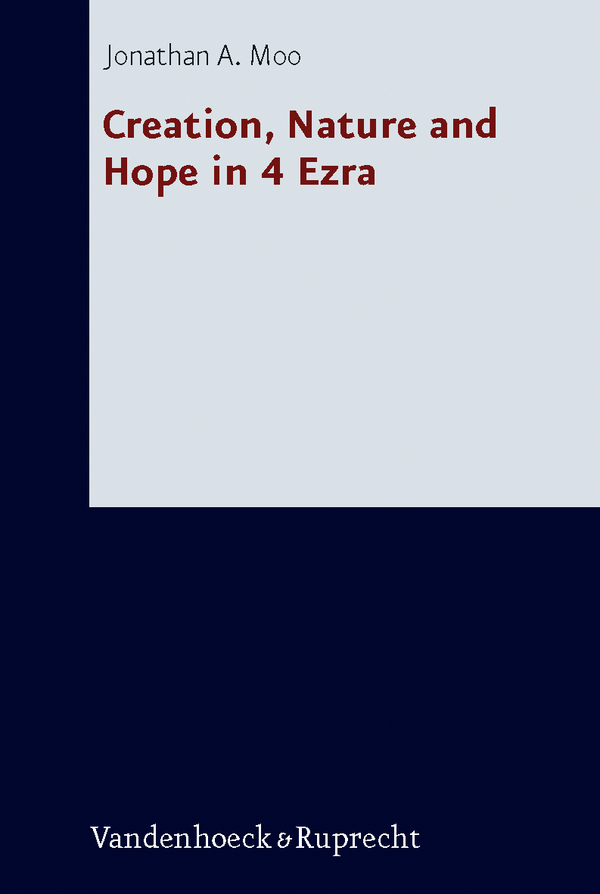 This book had its origins in a Ph.D. dissertation for the University of Cambridge, England. In it the author, Jonathan Moo, sets out to accomplish two important tasks: 1) he explores the important topic of the role of the created order in 4 Ezra in terms of its origins, its present existence, and most importantly its role in eschatological expectations; 2) he also attempts to make a contribution to discussions surrounding typical conceptions of the “apocalyptic worldview” as it relates to whether apocalyptic is pessimistic about this present world order.

Moo begins by surveying and questioning entrenched conceptions of the “apocalyptic worldview” which stress an eschatological and cosmological dualism.  This dualism is pessimistic about the present world and looks for an other-worldly hope.  In other words, the present age is so evil that apocalyptic writers despair of any hope for salvation in and of this present world, and they will be destroyed and replaced by a new world that will come about only by divine intervention. Even for those who don’t find this dualism quite so sharp in many apocalypses, they find that 4 Ezra is an exception in that it has lost hope in the present world. This context provides a fitting setting and rationale for exploring the theme of creation in 4 Ezra. Moo deals with three other preliminary matters before launching into a detailed study of 4 Ezra. First, though 4 Ezra evidences a complicated history of textual transmission, Moo chooses to follow closely the Latin translation of 4 Ezra; though at times he interacts with the other versions. In fact, a better title for his work might be Creation, Nature and Hope in the Latin Version of 4 Ezra. Second, Moo accepts 4 Ezra as the work of a single author. Third, since the book consists largely of a dialogue between Ezra and an angel, Moo considers both the voices of Ezra and the angel to communicate the true perspective of the book.

His book divides the issue of 4 Ezra’s view of creation into three parts, which correspond to the major chapters of the rest of Moo’s book: Creation in the Beginning; Creation Now: a World in Peril; The Saeculum [world-age] to Come. Moo (Chap. 3) begins with 4 Ezra’s references to the original creation. Moo finds that 4 Ezra emphasizes the goodness of creation as the result of a sovereign act of God. The original creation, prior to the fall, was meant to be an inheritance for the people. Ultimately, evil is not due to the physical nature of creation itself (contra Gnosticism), but human sinfulness. What is emphasized is God’s sovereignty over creation, despite his apparent inactivity in it (cf. 6:38-54).

In Chap. 4 Moo surveys in detail the present creation in peril. Here he finds that creation is characterized as a place of disorder and corruption in need of a radical transformation, which gives rise to Ezra’s pessimism.  Furthermore, in 4 Ezra God has predetermined two “world-ages” -Moo’s preferred translation for the Latin saeculum (pp. 97-99)- contributing to the sharp contrast between the present world-age and the world-age to come (7:50; cf. 8:1). However, Moo also finds in 4 Ezra hints of value for the present creation, despite its corruption and the strong discontinuity between the present world-age and the one to come. First, Moo finds a creational theology in 4 Ezra, where even in the midst of its corruption creation still reveals something of God’s ways (“natural law”) which holds the ungodly accountable: “the created order continues even in this corrupt age to testify to the ways of the Creator” (p. 102). This raises the question for Moo as to whether 4 Ezra, then, includes the present, natural world in some way in his eschatological hope. He concludes that, due to the bond between humanity and creation, if humanity is transformed at the resurrection, might not creation itself be freed from corruption and restored?

The final chapter (Chap. 5) surveys in detail 4 Ezra’s eschatological conception of a coming saeculum (world-age). Here Moo notes the strong discontinuity expressed in the stark division between the two ages (cf. 4:29), which suggests the replacement of the present world- age by a future one. But Moo also cautions against thinking that this is the final word on the matter. For example, in 7:75 creation is to be “renewed.” Furthermore, especially in 7:26-44 Moo finds a blurring or ambiguity between elements of the messianic kingdom of this present world and the future world-age. The hidden city and land (presumably in heaven) seem to be disclosed to those still surviving in this creation; the present world-age seems to awaken after a period of silence; the earth and dust are still able to give up their dead in the new saeculum (7:32). All of this seems to emphasize a continuity between the two world-ages, present and future, creating a “messiness” in the author’s portrayal of the two ages. Moo also draws attention to a strange reference to “another land” (13:40, 45) in this present creation, where the law is being kept and which has apparently escaped corruption. For Moo, this all suggests that there is both discontinuity and continuity between the two world-ages, and the present world will undergo a renewal rather than a complete replacement. The strong dualism between the two ages can be explained as primarily to emphasize “God’s sovereignty and his predetermination of two ages” (p. 158).

Moo has, I think, successfully accomplished his two goals. He has provided a careful survey and exegetical analysis of the theme of Creation and eschatological Hope in 4 Ezra in terms of how that relates to the role this present world plays at the consummation: will it be destroyed and replaced, or renewed? Further, Moo has correctly in my view challenged the traditional conception of apocalyptic as pessimistic toward this world. This view should probably be abandoned as an inherent or characteristic feature of the world view of apocalyptic. It may have been helpful if Moo would have included a discussion of saeculum earlier than he did, since it is so important for much of his argument. It might have also been helpful to reflect hermeneutically on how literally one takes the imagery in 4 Ezra, and how the literary genre influences some of his conclusions. Further, his solution to the ambiguity or inconsistency between strong discontinuity and continuity in 4 Ezra is to privilege the statements of continuity and reassess the discontinuity, when perhaps we should allow the “messiness” to stand in stark contrast. But I found Moo’s work to make an extremely important contribution to a neglected theme in 4 Ezra and eschatology more generally. As he begins to explore in his conclusion, it also has implications for how we think about the eschatology of NT books (e.g. Revelation) and their view of the Christian’s future hope (Is heaven our final destination?).