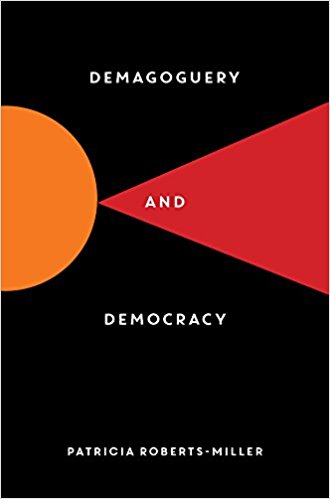 Several small volumes have appeared since the presidential election of 2016, as well as several large volumes as well. These smaller books, such as The Trouble with Reality by Brooke Gladstone and On Tyranny by Timothy Snyder, warn of the perils unleashed by the victory of Donald Trump. This short book never mentions that election, but seems aimed at the sitting President, nonetheless. The author, a professor of rhetoric at the University of Texas at Austin wants to warm us that, unless change is eminent, democracy may dissolve into demagoguery. I concur, and take the legitimate insights of the book to apply across the political spectrum.

But what is demagoguery?  In the simplest understanding, the author writes on that “Demagoguery is about identity. It says that complicated policy can be reduced to a binary of us (good) and them (bad)” (8). Thus, political questions are answered not by reasoned analysis of several sides of the issue, but by agreeing with those who we like and disagreeing with those we do not like. Instead of a deliberative process that serves democracy, demagoguery refuses discourse and chooses sides in an either/or manner. Instead of reasoned analysis, the other side is vilified and not taken seriously. Demagogues lack what she calls “self-skepticism.” Her more thorough analysis comes in chapters III and IV. However, her detailed definition on page 33 is somewhat unclear and convoluted. In fact, the author repeatedly writes in long convoluted sentences filled with too many semicolons and parenthesis, thus inhibiting an orderly flow of ideas.

In her chapter, “Demagoguery: A Case Study,” Roberts-Miller illustrates her point by explaining the argument used by Earl Warren, then attorney general for California, to justify the internment of Japanese-Americans during World War II, specifically in the spring of 1942. Warren’s arguments are flawed and he did not adequately consider the other side of not deterring Japanese-Americans (who were, after all, Americans). Warren, “offered his listeners security from invasion or attack, presented his case as certain, blamed the country’s ill…on ‘the Japanese,’ and evaded the rhetorical responsibilities such as participating thoroughly in the hearings by listening to experts who disagreed with him” (69). Warren, who became a member of the Supreme Court, later regretted his decision.

In the final chapter, “What Do We Do?” Roberts-Miller gives four suggestions on how to counter demagoguery. First, we can consume less of it and shame media that promote it. This is true, but ignores the question of which media are guilty. Second, we can chose to not argue with those taken captive by demagoguery. Indeed, there is no point in “casting our pearls before swine,” as Jesus said. Those who castigate all opposing views and will not exercise self-skepticism are better left alone. (Of course, we have to ask if we are one of them.) But a few pages later under an elaboration of point two, the author advocates engaging them. Third, we can argue with family and friends if it seems worthwhile. This repeats the elaboration of point two. Fourth, we can support “democratic deliberation,” which means looking at both sides and thinking carefully about political matters (or anything else, I would add). The chapter also explains several logical fallacies we should avoid in our deliberations. She speaks of “the fallacy of the wells,” but there is only one well in this fallacy.

It appears that the argument of the book is that we should identify demagoguery, reject it, and pursue a better way. It is either demagoguery or the virtuous pursuit of democracy. I agree with the broad outlines of this argument. Nevertheless, this seems contradicted by her statement that “Demagoguery is fun because it makes us feel really good about ourselves, it makes it seem that complicated and difficult issues are simple and it can provide a kind of clarity. It isn’t always bad” (129). How odd! She previously said each of these qualities impedes our judgments and undermines democracy, period. This is the last sentence of the book—a resounding waffle.

Not a few other errors detract from this book. It is not well-edited. Punctuation errors are found on pages 40, 56, and 95. The author’s writing is often so convoluted that one wonders if she is sporting to cram as many words into one sentence as grammatically possible. The book reports that the American invasion of Afghanistan occurred in 2011 instead of 2001. Psychiatrist, Eric Fromm, is described as “the scholar of Nazism.” He wrote a book on it, Escape from Freedom, but was not known as a scholar of Nazism.

Demagoguery is an increasing threat to democracy; and while this book shines some light on the topic, it inconsistencies and carelessness fail to illuminate the dark landscape to my satisfaction.