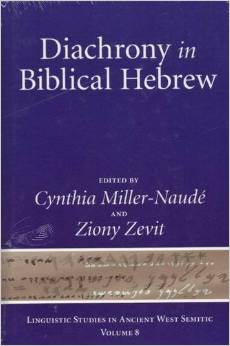 This volume comprises many papers presented at sessions of the National Association of Professors of Hebrew in 2009-2010.  These were planned in part as a response to I. Young, R. Rezetko, and M. Ehrensvärd’s two-volume Linguistic Dating of Biblical Texts (2008).  That work challenged the generally held view that biblical Hebrew texts could be dated by examining changes in aspects of language use.  Miller-Naudé’s introductory chapter, “Diachrony in Biblical Hebrew: Linguistic Perspectives on Change and Variation” (pp. 3-15), provides definitions and notes language change in terms of grammaticalization.  E.g., lÄ“’mÅr began as a preposition attached to an infinitive construct but became grammaticalized as a complementizer for introducing direct speech.  After reviewing various types of borrowing, Miller-Naudé emphasizes the difference between the Bible as a linguistic artifact and the linguistic system(s) of BH (Biblical Hebrew).

The papers are grouped into different sections.  The first concerns theory and method.  B. Elan Dresher, “Methodological Issues in the Dating of Linguistic Forms: Considerations from the Perspective of Contemporary Linguistic Theory” (pp. 19-38), notes that unlike other languages (e.g., Old English), BH lacks early evidence and extra biblical evidence.  We do not have clear data regarding sound changes.  However, Dresher does identify variation, using the synonymous lexemes mamlÄkâ and malkût.  There is a quantifiable shift from the predominant usage of the former in generally recognized earlier books to the latter in those books dated to the (post)exilic period.  Nor is it likely, as Dresher notes, that these simply represent two different styles co-existing, as in the Aramaic texts from Elephantine.  There the Eastern dialect was used in letters to Persian authorities whereas the Western dialect predominated in local and other correspondence and texts.  There are no comparable socio-historical circumstances to explain such variation in BH as non-diachronic.

T. Givón, “Biblical Hebrew as a Diachronic Continuum” (pp. 39-59), argues for the diachronic change in BH based on the fact that its variation follows “known, universal, directional trends” identified in multiple languages.  Later texts, the Song of Songs being perhaps the latest, were composed by authors whose native language was probably not Hebrew (but Aramaic).  For example, in comparing Genesis with the Song of Songs, the Genesis preterite appears in 100% of VS (Verb-Subject word order) clauses and almost exclusively in main clauses.  In the Song, however, only 6% of the clauses use the preterite whereas the perfect now replaces it in 30% of the clauses.  The same change occurs in the movement from the use of ’Äƒšer to ša- in relative clauses.  These and other examples attest to change that is best understood as diachronic in the light of universal language change.

Jacobus A. Naudé, “Diachrony in Biblical Hebrew and a Theory of Language Change and Diffusion” (pp. 61-81), argues that change must be viewed “holistically.”  He emphasizes the complexity of multiple variables and reciprocal influences.  Diffusion and change in language follows an S-curve, where the change begins slowly, accelerates at a certain point, and then levels off when it is clearly the dominant feature in the language.  Naudé’s example of the consecutive waw forms illustrates how, in a measurable context, these forms diminish from BH to Qumranic Hebrew, and disappear altogether in Mishnaic Hebrew.  He notes how this affected the use of independent pronouns that, by the time of Qumran Hebrew, could follow a waw conjunctive at the beginning of a clause and precede the verb.

Robert D. Holmstedt, “Historical Linguistics and Biblical Hebrew” (pp. 97-124), takes the position that the use of style to explain linguistic variation is inadequate.  This position was advocated by Young, Rezetko, and Ehrenvärd.  Holmstedt also rejects the traditional categories of Early and Late Biblical Hebrew as inadequate.  Variation in different phenomena can occur at different times and at different speeds.  No single feature can determine relative order.  He reviews various types of exogenous and endogenous change.  Using the change from “’asher” to “she” as an example, he notes that it supports the traditional understanding of the “S” curve variation from what are usually assumed to be the earliest written books in biblical Hebrew through to post-biblical Hebrew.

A. Dean Forbes and Francis I. Andersen, “Dwelling on Spelling,” introduce the second major part of the book, “Examining Diachrony in Biblical Hebrew” (pp. 127-45).  Reviewing earlier work and using various methods that cross-validate one another, they conclude the presence of defective spelling in earlier books (including the Pentateuch) and the significantly greater presence of vowel letters in later biblical books.

With Yigal Bloch, “The Third-Person Masculine Plural Suffixed Pronoun –mw and Its Implications for the Dating of Biblical Hebrew Poetry” (pp. 147-70), the volume turns to “Morphological Features.”  Bloch explores this feature in nouns and verbs.  He argues that it continued at least until the mid-eighth century B.C.  He also argues that the use of short prefixed verbal forms to express completed past actions could be found as late as the sixth century B.C. in biblical Hebrew.

Steven E. Fassberg, “The Kethiv/Qere h(i)v’, Diachrony, and Dialectology” (pp. 171-80), considers the widespread occurrence in the Pentateuch of this form for the third person feminine singular independent pronoun (120 times) in comparison with its scarce use elsewhere in the Bible (3 times) and the twenty Pentateuchal occurrences of the traditional third person feminine singular independent pronoun.

Martin Ehrensvärd, “Discerning Diachronic Change in the Biblical Hebrew Verbal System” (pp. 181-92), examines some features that have been suggested as diachronic markers; i.e., wetiqtol forms and three varieties of infinitive constructions.  He concludes that none can be used for this purpose.  He is the only contributor to this volume from among the three authors of the original publication (see above at the first paragraph) to which the current work endeavors to respond.

Tania Notarius, “The Archaic System of Verbal Tenses in ‘Archaic’ Biblical Poetry” (pp. 193-207), explores the use of the imperfect and perfect verbal forms in unique ways in archaic poems of the Pentateuch and 2 Samuel 22.  The imperfect yiqtol exhibits a present progressive sense while the perfect qatal form provides an anterior perfect in a perfect clause.

There follow two contributions on “Syntactic Features.”  Elitzur A. Bar-Asher Siegal, “Diachronic Syntactic Studies in Hebrew Pronominal Reciprocal Constructions” (pp. 209-44), reviews the pronouns and their referents that occur in reciprocal constructions.  The conclusion is that there is more than a lexical shift between the uses in biblical and Mishnaic Hebrew.  There may also be a change of referent.  Some changes may occur due to Aramaic influence.  Bar-Asher Siegal does not recognize syntax as indicative of diachrony in biblical Hebrew.  Given the title of the book, the sole emphasis on change from biblical to Mishnaic Hebrew might seem out of place.  However, it is no more so than the later chapters on diachrony in Aramaic, Ugaritic, and Akkadian.

NaÊ¿ama Pat-El, “Syntactic Aramaisms as a Tool for the Internal Chronology of Biblical Hebrew” (pp. 245-63), argues that syntactical influence only occurs where the linguistic contact is prolonged and intense.  He provides two examples of such contact in biblical Hebrew, the marker –Ê¾et with the object suffix and the causal use of a form that appears in Jonah and Qoheleth as bÄ›-šel.  Pat-El demonstrates the process of reasoning by which these occurrences suggest post-exilic influence.

Frank H. Polak provides the first of two essays on “Sociological and Dialectical Considerations” with his essay, “Language Variation, Discourse Typology, and the Sociocultural Background of Biblical Narrative” (pp 301-38).  On the basis of syntactical complexity he distinguishes three types of style in Hebrew narrative:  the generally pre-seventh century Medial style with paratactic clauses that are lean and brisk, the seventh and early sixth century Judean style representing texts written by scribes with a chancery education, and the post-exilic Achaemenid style written by scribes whose training was in Aramaic (as well as Hebrew).  While there may be exceptions due to deliberate archaizing or to unique themes, these distinct styles can be detected consistently.  Among other thing the Medial style betrays an oral culture (an “oral-literate nexus”) while the later styles do not.  In the second essay, Gary A. Rendsburg studies “Northern Hebrew through Time: From the Song of Deborah to the Mishnah” (pp. 339-59).  In terms of markers that distinguish Northern Hebrew, he notes no profound, distinct changes in the earliest Northern Hebrew in the Bible right up to Mishnaic Hebrew.  The language does change but its change follows that of the rest of biblical Hebrew.

In “Diachrony in Biblical Hebrew Lexicography and Its Ramifications for Textual Analysis” (pp. 361-75), Chaim Cohen studies two examples of lexical-grammatical features that have been suggested to distinguish Archaic Biblical Hebrew (as represented by some ten poems in Genesis through 2 Samuel) from Standard and Late Biblical Hebrew.  He finds the almost complete absence of the nota accusative to be convincing, especially as this is all missing from the earliest (11th and 10th centuries B.C.) Phoenician inscriptions.  He argues that the occurrences of this phenomenon in four verses in the Archaic poems can all be explained, with two minor emendations, except those appearing in Deuteronomy 33:9.  With regards to the second examples, the abstract –ût suffix, Cohen finds this present in all periods and thus rejects attempts to use this element to date Hebrew texts.

Part 4 of the book examines “Comparative Semitic Perspectives on Diachrony.”  Three essays look at related languages and their texts.  Michael Sokoloff, in his “Outline of Aramaic Diachrony” (pp. 379-405), identifies phonological, morphological, syntactic, and lexical items of cleary provenance texts that provide distinctive profiles for Aramaic periods and dialects.  Joseph Lam and Dennis Pardee’s “Diachrony in Ugaritic” (pp. 407-31) note the production of extant Ugaritic texts should be limited to about a century and that difficulties remain in distinguishing archaizing and truly archaic feature of literary texts.  This latter point also applies to N. J. C. Kouwenberg, “Diachrony in Akkadian and the Dating of Literary Texts” (pp. 433-51), where issues emerge regarding archaic features intentionally inserted into literature and regarding the dialectical differences between contemporary (nonliterary) Assyrian and Babylonian.

A concluding study by Ziony Zevit, “Not-So-Random Thoughts Concerning Linguistic Dating and Diachrony in Biblical Hebrew” (pp. 455-89), reviews the works of Young, Rezetko, and M. Ehrensvärd with a view toward appreciating the programmatic nature of the work and the manner in which it provides an important critique of some earlier work.  However, Zevit also critiques the weaknesses of the authors’ work in their generalizing assumptions about random errors and lack of scribal care in the preservation of particular text traditions.  Noting the evidence for a distinctive conservatism in the proto-Masoretic texts at Qumran and elsewhere, he constructs a socio-historical model to explain the emergence of what has been called Late Biblical Hebrew.

Useful indices conclude the work.  This is much more than a collection of essays on the linguistic topic of diachrony.  It provides an essential starting point for any who would understand the wide ranging approaches toward this topic in biblical Hebrew and related topics.