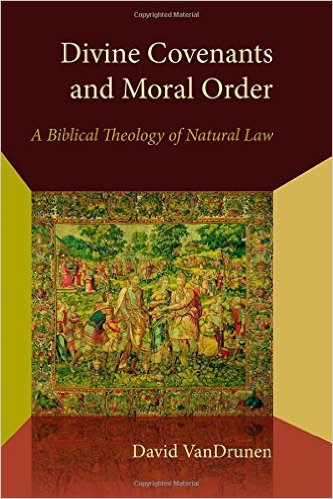 Churches and Christians across the Western world have increasingly had to grapple with the reality of moral fragmentation and relativism in the modern age. Therein, the language of natural law, allowing for the possibility of common morality, has continued to resurface in discussions regarding Christian ethics. Though an area of thought typically dominated by Thomist Catholic thinkers, Protestants have increasingly engaged in natural law thought and dialogue in an effort to render the concept useful for other segments of the Church. David VanDrunen’s recent Divine Covenants and Moral Order: A Biblical Theology of Natural Law represents a significant contribution to this evolving area of Reformed ethics and theology.

VanDrunen characterizes his book as a continuation of his earlier Natural Law and the Two Kingdoms: A Study in the Development of Reformed Social Thought, which functioned largely as a historical treatment of Calvin’s approach to Christian political life. Within that work, VanDrunen sought to establish the intrinsic compatibility between the Reformed tradition and some version of the natural law. The Reformed tradition in its truest form, according to VanDrunen, can accommodate a thoughtfully constructed Protestant version of the theory that takes seriously the reality of the fall, the centrality of Christ, and the hope of the eschaton.

In Divine Covenants, VanDrunen engages in the constructive task begged by his previous book. Here, he seeks to address the prescient questions of moral fragmentation in the modern age by grounding the notion of natural law squarely within the Scriptural narrative. VanDrunen is correct in noting: “Recent authors have done relatively little actual exegesis of Scripture in the service of natural law theory, and most recent Protestant attempts to forge constructive theories of natural law give scant attention to what Reformation theology might contribute to this endeavor” (2). By heavily relying on the covenantal moments in Scripture, VanDrunen traces a natural law formation throughout salvation-redemption history that he claims bears implications for modern Christians.

VanDrunen ambitiously attempts to situate his work within the natural law tradition started by Thomas Aquinas: fully imbedded within a distinct understanding of metaphysical realism and specific human teleology. Yet, VanDrunen simultaneously seeks to distinguish himself from earlier Thomist and Enlightenment theories of natural law. A strict adherence to Scripture, according to VanDrunen, means natural law reflection must begin with God’s revelation rather than human reason or the natural world; whereas for Thomas it began with observation of the world and human reason. Moreover, VanDrunen suggests that a serious exegesis of Scripture will result in a nature-grace relationship that departs from traditional Catholic natural law theory.

With this trajectory, VanDrunen provides a compelling account of how the natural law can be found imbedded within God’s covenantal relationship with humanity. Ranging from creation, to the Noahic and Mosaic covenants, VanDrunen suggests that a continuing affirmation of universal moral obligation appears even in a post-lapsarian context. How, though, does this integration of Reformed covenantal theology and natural law function?

In the creation narrative VanDrunen observes a covenantal relationship God established between Himself and Adam that creates a protological natural law: “God, through nature itself, imposed moral obligations upon human beings that are rightly characterized as natural law” (86). This protological natural law, though inherent in the image of God, also required God’s articulation in the creation mandate. From the beginning, VanDrunen suggests, we have had both the propensity to and knowledge of the natural law because of God’s creative act and covenantal orientation. The natural law, then, “…did not consist of static deonotological principles but was a moral order by which God normatively oriented human beings for a creatively fruitful life in exercising royal dominion in this world toward the eschatological goal” (95).

However, in taking the Scriptural text seriously VanDrunen acknowledges that the fall and the presence of sin have impacted this protological natural law. He regards God’s covenant with Noah made after the flood as the key lens for understanding the continued place of the natural law for modern humanity. On VanDrunen’s reading this Noahic covenant documented in Genesis 8-9 becomes the key expression of God’s preservation of some moral order. God’s interaction with Noah represents the fundamental re-articulation of imperfect but necessary universal moral obligations for humanity: “The Noahic covenant holds out no hope of attaining a perfect and lasting peace, only of avoiding war of all against all. The dominion Noah’s descendants can achieve is but a shadow of the dominion Adam was supposed to achieve” (119). God, according to VanDrunen, has adjusted moral obligations for a fallen but preserved world.

VanDrunen views this Noahic covenant as categorically different than the later Abrahamic, Mosaic, and Davidic covenants, which all spoke specifically to certain groups of people regarding salvation. In contrast, the Noahic covenant was universal and aimed at preservation, not salvation. None of these later covenants of grace could abrogate the natural law and in many ways served to affirm the key tenets of natural law. VanDrunen’s linkage between covenant and natural is innovative in cultivating a Reformed understanding of universal moral obligations. Yet rooting natural law in the Noahic covenant may not provide modern Christians with a robust or useful vision of universal morality (the Noahic covenant serves as a call to procreation and restriction on murder). While VanDrunen rejects the procedural aspects of the Enlightenment natural law project (as essentially rooted in human reason), he functionally cultivates the same product as Hugo Grotius and Samuel von Pufendorf: a minimalistic natural law essentially focused on the basic survival and maintenance of human society.

The greatest tensions in VanDrunen’s argument can be found within his articulation of the relationship between the Noahic natural law and the new creation ethic introduced in Christ. The natural law still claims universal validity and yet Christians have now been called to a higher ethical reality in the person of Christ. VanDrunen faces the difficulty of recognizing that both “…the protological old creation and the eschatological new creation are divinely established and inherently good, but are also distinct” (478). The best VanDrunen can provide us with in moral action-guidance is for each Christian to embody a dual-citizenship that affirms both covenants.

While such a position may appear rhetorically satisfying it does not fully satisfy its Christian reader’s curiosity about how to navigate some of the most basic instances of moral obligation: Should Christians be the ones to carry out retributive justice (as instituted in the Noahic covenant), or is it their place to endorse a vision of mercy and forgiveness (Luke 6:27)? If the old covenant demands procreation, but Christ indicates that in the new creation we will no longer marry or be given in marriage (Matt 22:30), how are Christians to prioritize the covenants? VanDrunen’s two citizenships thesis leaves the present ethical obligations of Christians ambiguous at best. The overlapping nature of a Christian citizen’s duty diminishes the practicality of VanDrunen’s natural law for Christian ethics. One would hope that in VanDrunen’s nearly 500-page exploration of a Scripturally informed natural law such tensions would be resolved, but these issues are left hanging.

VanDrunen’s Divine Covenants represents a significant and ambitious undertaking that can reward all interested Christian readers. For those new to the natural law tradition, it provides an effective overview of how his Reformed natural law stands in continuity and contrast with historical natural law arguments. For those already well versed in natural law rhetoric it represents on opportunity to grapple with the place of Scripture and revelation in developing a Christian natural law ethic. While VanDrunen may not provide his readers with a satisfying template for approaching moral fragmentation, he has begun a helpful conversation about how the commitment to Scripture’s authority and Reformed theology contribute to an understanding of universal moral obligation.