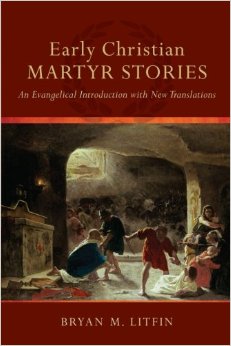 Litfin’s thoroughly researched study collects, as the title indicates, the most significant primary texts in contemporary translations of early Christian martyrdom. The texts chosen describe in considerable detail persecution of early Christians, primarily at the hands of Roman emperors such as Nero, Trajan, Decius, Valerian, and Diocletian prior to the emperor Constantine and the so-called Edict of Milan (313). Because committed Jesus followers refused to sacrifice to the Roman gods, worship the emperor and curse Christ, they were charged with sedition and treason and brutally persecuted.

The book describes in realistic but grisly detail the punishment meted out upon faithful Christians for violating the Roman imperial cult and holding fast to their confession of Christ as Savior and Lord. In sporadic persecutions during the early centuries Christians were cast into dank dungeons, starved, tortured on racks, set on fire, pierced with swords, strangled, beheaded, and fed to lions—their lifeless remains often fed to wild dogs. With the chronicling of horrors that often defy description—and which make recent water boarding interrogation appear tame—the author invites the reader to allow emotions to flow, be they emotions of horror, outrage, or inspiration for faithful living in today’s world. The underlying reason for the intense persecution, the author argues, was a radical clash of world views between raw paganism and vibrant Christianity.

The bulk of the book consists of martyrdom texts written by prominent Christian authorities with substantial interpretive comments and historical notes. The first segment is Jewish, relating the story of the Maccabean martyrs at the hands of the Greek King Antioches IV two centuries before Christ. The ruthless king persecuted God’s people and profaned the altar of the temple in Jerusalem (cf. the abomination of desolation recorded in Dan. 11:31).  There follows the martyrdom of Peter (reportedly crucified upside down) and Paul (allegedly beheaded) as set forth in second century non-canonical texts, which the author judges to possess an historical core with imaginative and legendary accretions. Historically more reliable is the account of Ignatius of Antioch (d. 107), bishop of Syria, who was dragged in chains to Rome and killed by wild beasts in the amphitheater.

The martyrdom of Polycarp of Smyrna (d. 155) recounts the church father’s refusal at age eighty-six to curse Christ for which he was burned alive at the stake. Justin Martyr (d. 165) was lashed with whips and executed by Rusticus, mayor of Rome. Similar martyr stories follow concerning stalwart believers in Gaul and North Africa, including the women Perpetua of Carthage (d. 203) and Felicity shortly after giving birth—both of whom were thrown to wild beasts. Texts from Tertullian (d. 220) present compelling Christian perspectives on martyrdom and encouragement to persecuted believers. Litfin asserts that Tertullian’s famous dictum on martyrdom—employing the imagery of a harvest—more accurately should be translated, “The blood of Christians is seed.” Texts from the pen of Origen of Alexandria (d. 254) contain a theological exploration of apostasy and martyrdom. Imprisoned and brutally tortured for his faith, Origen extolled the eternal rewards of believers who held fast to their confession. Texts written by Lactantius and Eusebius detail the Great Persecution of Christ followers in the fourth century under the brutal emperor Diocletian. A sermon by the great Augustine of Hippo (d. 430) honors the memory of faithful martyrs, particularly the courage of women who remained loyal to Christ under immense pressure.

This well-crafted and informative book expertly portrays the early Christians’ refusal to bow to false gods, their committed faithfulness to Christ, and their certain hope of the resurrection to everlasting life. Litfin’s careful research and expert knowledge of early secular and Christian history brings alive this painful but fruitful period of the “already” dimension of God’s kingdom. The book also highlights the raw depravity of emperors and cultures that are ruled by the god of this world. This commendable book is certain to raise into consciousness the painful experiences of the tens of thousands of persecuted and martyred believers in our world today. It is certain to impress upon the hearts of readers the cost of being a faithful Christian disciple. It also reminds us of the confession true Christ-followers would need to make in the face of the rising tide of hateful, anti-Christian opposition in our day. By the power of Jesus and the examples of these early martyrs, may we be equal to the task.