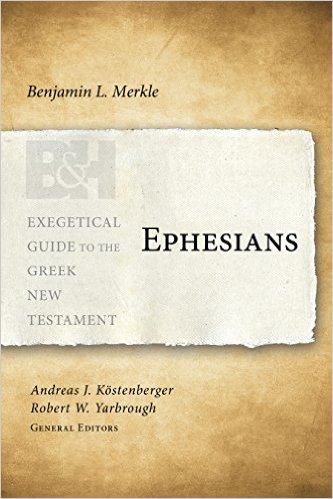 When Murray Harris first conceived of the Exegetical Guide to the Greek New Testament series, he envisioned volumes that would distill the best of a half-dozen of the standard, recent commentaries on biblical books, help readers understand complex controversies briefly, and save them acquiring and consulting a much more substantial collection of resource works.  He also thought he would write them all.  His 1991 offering on Colossians and Philemon was an outstanding exemplar but his second volume, on John, appeared only in 2015.  Meanwhile, two editors and one publisher later, the series has been divided up, assigned to a diverse array of authors, and other volumes are starting to appear.  Merkle, professor of New Testament and Greek at Southeastern Baptist Seminary, has now authored the sixth volume to appear.

The nature of the volumes continues to evolve as well.  Ephesians is broken down into bite-size pericopae; under each is a discussion of its structure, a Greek grammatical layout, verse-by-verse and phrase-by-phrase or even word-by-word comments that don’t just highlight key gleanings from other major recent works (thought they do at least that) but also give Merkle’s own views, deal with more minor grammatical issues, sometimes in interaction with other sources, and supply detailed bibliographies topically classified according to the issues of the pericope.  After all that, we are given a simple English outline of the passage under the heading, “homiletical suggestions.”

The least useful parts of the book are the grammatical layouts, largely due to the format the editors or publisher has chosen to follow and the inconsistency with which it is followed.  Because there is often insufficient room on the page to complete a line of text that should stay on one line, diagonal arrows make you pick it up later starting at the margin again.  Vertical ellipses indicate different forms of continuation from clause to clause, understandable if you can diagram the passage for yourself but not always otherwise.  And although the editors say that phrases and clauses that modify words in the lines above them are indented so that they begin below the words they modify, there are so many exceptions to this (sometimes it would seem to avoid more incomplete lines having to be cut in two, but also for other indeterminable reasons—just errors?) that one simply can’t count on this being correct.

The exegetical body of the commentary on each passage has a wealth of helpful information.  It also canvasses many more sources than Harris probably ever originally envisioned.  As a result a wealth of grammatical labels are surveyed, not always used by different authors in the same ways, and there is no necessary way to determine how Merkle himself is using some of the ambiguous categories.  On the big interpretive controversies where the major options are listed and indented and Merkle’s preferred one asterisked, the guidance given is almost always judicious.  Lesser issues dealt with in between these big ones receive more unequal treatment.

Numerous questions come to mind.  First, Bauer’s dictionary (BDAG) is classifying this phrase as causal, not supplementing an already existing determination that κατá½°, is introducing a norm.  Why should we consider that it is both?  Second, is τοá¿¦ θελá½µματος really an attributed genitive?  That is a category Daniel Wallace created in his grammars to deal with a small number of genitives that didn’t seem to fit the standard categories.  But he also notes that “x of y” constructions, where x and y are noun equivalents and y is in the genitive case, are often either objective or subjective, especially if x can be thought of as a verbal noun.  It is easy to see this as an example of God’s will being pleased to do something, and therefore we would have a subjective genitive.  It is exactly parallel to the clause that Merkle rightly identifies as subjective in verse 11 where God’s will counsels something.  Or if the verbal sense is muted, then Hoehner’s category of source makes good sense.  Why opt for a rare category of genitive that not all grammarians think even exists and that requires inverting the way the two nouns function from the far more common attributive genitive?  Third, where we have what is almost certainly a possessive genitive—Paul’s standard use of genitive personal pronouns that follow nouns, Merkle tells us that we have a subjective genitive.  Most likely Paul just means “his will.”  It is the “pleasure” not the “will” that is the verbal noun in this phrase:  God’s will was pleased to do something.

Five verses later in 1:10, Merkle comments on the infinitival clause, “to sum up all things in Christ”:         ” ‘Aνακεφαλαιá½½σασθαι (aor. mid. inf. of á¼€νακεφαλαιοá½½, ‘sum up,’ ‘recapitulate’ [BDAG 65c]).  This vb. Is an explanatory (epex.) inf. that . . . explains the content of the mystery of God’s will.”  But on the grammatical layout, it is not treated in this fashion but as subordinate to προá½³θετο (“he planned”).  After a verb which cries out for a direct object, an infinitive is not likely to be epexegetical but complementary/supplementary:  what did God plan to do?  Answer:  he planned to sum up all things in Christ.

In 3:2, Paul writes, “surely you have heard of the stewardship of the grace of God which was given to me for you.”  Merkle analyzes τá¿†ς χá½±ριτος (“of the grace”) and concludes it is “best taken as a gen. of apposition . . .but would have a sim. mng. if taken as an obj. gen.”  He correctly recognizes that the former means “the stewardship, which is the grace”; and the latter, “he stewards grace.”  But these are hardly similar.  That’s why grammarians take the time to make these distinctions.  “Stewardship” in this context is the task Paul was given; God’s grace is what he was called to steward.  It makes little sense to say the task is the grace.

Fortunately, on bigger picture issues, Merkle proves much more reliable.  In 3:5 Paul is making a fairly absolute rather than relative comparison between what was known of old and what has been revealed since Jesus came about the new age, though that does not mean there were no references to coming blessings for the Gentiles in the OT.  Chapter 3:10 highlights that it is in the very unity of the multiracial community of Jewish and Gentile Christians that the presence of God’s wisdom is disclosed to the unseen powers of the universe.  The language of 4:8 (“he gave gifts to men”), reversing the Psalmist’s language in 68:18 (“he received gifts from men”) is drawn from the same interpretive tradition that influenced the Targum on this Psalm to make the same change, and might just possibly represent the earliest Hebrew text form as well.  “The lower parts of the earth” in 4:9 contains an epexegetic genitive.  This is not about a descent into hell; the lower parts [of the universe] into which Christ descended were the earth.  Further, the descent refers to the incarnation.  The consecutive portions of 4:12b are subordinate not coordinate:  God gives gifts for the equipping of the saints; the purpose of that equipping in turn is to build up the church.

How to deal grammatically with 5:21 is every commentator’s nightmare and Merkle’s outline clearly shows that mutual submission is the final result of being filled with the Spirit.  It is too bad, then, that Merkle goes on to limit the role of submission to one of subordinates to their authority figures, as if 5:21 functioned solely as the headline to 5:22-6:9.  It is a Janus verse and even if one takes a complementarian perspective, one does not have to exclude all instances of authority figures submitting to their subordinates.  Nor can one simply cite Wayne Grudem’s studies and exclude all meaning of “source” from κεφαλá½´.  In this context, as Richard Cervin has shown (a study surprisingly missing from Merkle’s otherwise commendably full bibliographies), neither “authority” nor “source” but “prominence” may be the main meaning.  And it is simply non-sense to say that when a woman submits to her husband she is submitting to the Lord.  That cannot the meaning of the comparative adverb “as” in verse 22.  If the two activities were identical, then a comparison between them would be pointless.  It would be like saying, “in what manner do you submit to your husband?  In a way resembling submission to the Lord.  But what does that look like?  It looks like submitting to my husband”!  A pre-established version of complementarianism has run roughshod over the text here.  Fortunately, Merkle does recognize that Paul does not ask wives to obey their husbands here, even though he does want children to obey their parents and slaves their masters.  And Merkle realizes the nature of the love that Paul calls husbands to give their wives is unique and remarkably self-giving.  But the homiletical suggestions at the end of 5:22-33 preserve the historic imbalance in Christian exposition of this text:  six subpoints about what wives must do derived from three and one-half verses and only four subpoints for husbands despite eight and one-half verses of text addressed to them!

The three commendatory blurbs on the back cover are interesting for what they do and don’t commend.  Thomas Schreiner says simply that this book should be on the shelf of everyone studying the Greek of Ephesians.  Eckhard Schnabel says that it will be invaluable because of issues that even the larger commentaries don’t treat, while Andy Naselli particularly likes the book for tracing Paul’s argument and understanding his grammar and syntax.  Rarely do I disagree more with three good friends’ book blurbs and wonder how carefully they read the volume in the limited time scholars are usually given to write words of commendation prior to books’ publication.  I would commend Merkle for nicely summarizing the main commentators’ positions, for almost always selecting the best positions among the options for the primary interpretive controversies, for canvassing the secondary literature more fully than any other writer in this series thus far and for his homiletical outlines (other than the one on husbands and wives).  But if one owns the major commentaries, then one doesn’t need Merkle (contra Schreiner), it is on the issues that the other commentaries don’t treat that one has to exercise caution in following Merkle (contra Schnabel), and, even if it is the typesetters’ fault and not Merkle’s, one simply can’t get a consistently reliable sense of the flow of a passage from the grammatical layouts (contra Naselli) because of all the errors they contain.