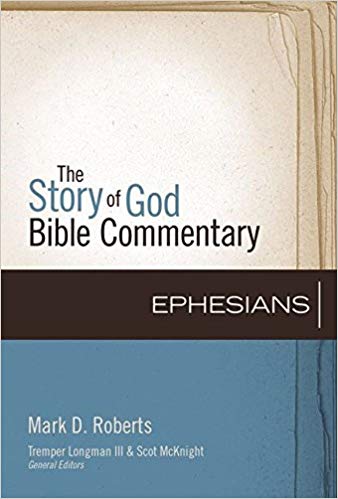 It is always risky to commend an entire Bible commentary series after only two volumes have appeared. But publishers routinely ask scholars to write blurbs under such conditions. I was very pleased with Lynn Cohick’s Philippians and liked Scot McKnight’s Sermon on the Mount, both of which inaugurated the Story of God Bible Commentary series in 2013, so I wrote a fairly generic blurb that I hoped would apply to most all of the volumes as they appeared. While quoted in full in the front matter, all that made it of the blurb to the back cover was “this commentary series breaks new ground…ideal for preaching and teaching.” People who don’t realize that the series is appearing over a long period of time have already misunderstood my words as applying equally effusively to every volume!

Fortunately, there haven’t been any real losers so far. How do I rate Mark Roberts on Ephesians? The problem is that Cohick set such a high standard with the opening volume, and Michael Bird’s Romans kept it going early on. The real potential of this series is the “Live the Story” section for each passage, which comes third in the sequence of remarks on each passage of preachable length. First appears “Listen to the Story,” which for some (including Roberts) merely points out key cross-references elsewhere in the Bible and talks a little about the form. This has most often been the part of the commentary series least well exploited. “Explain the Story” then follows with more typical commentary-like remarks progressing through each passage of the text. Roberts has his favorite half-dozen commentators whom he relies on (Arnold, Bruce, Lincoln, Thielman, M. Barth, and Hoehner) and he interacts with a handful of other scholars en route. But he does not cast his net nearly as widely across the whole gamut of scholarship as might have been helpful, if only to become aware of lesser known positions still worth considering or considering more—for example, W. Hall Harris on the descent of Christ in 4:8-10 as a reference to Pentecost, through the Spirit, giving gifts to his people. This position is noted in a single phrase, as part of a two-sentence reference to this entire large crux, with the incarnation accepted as the most likely referent (with which I agree) and the only footnote a cross-reference to the even more difficult 1 Peter 3:19-20. But readers will have no clue how Roberts made his decision. On the other hand, recurring references are made to Roberts’ new position with Fuller Seminary—a specially created position on helping students wrestle with vocation and a theology of work, which I would have thought Zondervan might curtail in its editing lest it sound too much like recruitment for the seminary!

All in all, however, I rarely find myself differing from Roberts’ positions on the major exegetical debates of Ephesians. He takes the letter to be from Paul, as an encyclical, though he doesn’t go into the debate but refers readers to other commentaries (even while he takes several pages to tell the story of how Harvard taught him to believe in the acceptability of a form of pseudonymity that was never intended to deceive, but which he has since abandoned). He thinks Ephesians has little distinctively relevant to Ephesus in its theology, though he never delves into Arnold’s case for spiritual warfare (cf. Acts 19) as precisely such a unifying theme. Roberts does helpfully highlight in his introduction all the actions that Paul teaches have happened to believers “together” with Christ.

At the end of chapter 1, Roberts, I think rightly, takes the convoluted Greek to refer to the church as the “fullness of Christ” that is filling the earth. He recognizes that the neuter “this” in 2:8 has to refer to the entire previous concept of salvation by grace through faith, which is not of ourselves, and appropriately highlights the oft-ignored verse 10 that balances verses 8-9 with the handiwork for which we were created. He captures the centrality of unity in the church as a witness to the invisible supernatural powers in 3:9-10, and understands that the grammar of 4:11-12 supports the giving of “people-gifts” to equip the non-leaders as well as the leaders of the church for its works of service.

Roberts flawlessly outlines the structure of 5:18 and following, with its subordinate participles including mutually “submitting,” and the beginning of the new section (as it is usually thought of) in verse 22 as simply the continuation of mutual submission. He would presumably consider himself an egalitarian, but his discussion is fairly labored and not entirely successful, in my estimation, as he tries to exclude all forms of authority from submission and headship. What he ultimately lands on (the husband sacrificially giving up of himself as Christ loved the church), extremely close to my own view (after all it’s what the text uncontestably says!), still seems to me to be a third way, as I expressed in my article “Neither Hierarchical nor Egalitarian: Gender Roles in Paul,” in Paul and His Theology, edited by Stanley Porter in 2006. He does grasp, nevertheless, that “it’s hard to overemphasize the cultural distinctiveness of Paul’s command for husbands to love their wives” (p. 203).

Surprisingly, after recognizing the Father’s central role in 1:3-6 and Christ’s key function in verses 7-10, he labels verses 11-14 simply “the Praise of God’s glory” (which is actually the refrain that concludes all three parts of Paul’s opening blessing). He thus misses the obvious chance to talk about the proto-Trinitarian function of the blessing, with the Spirit’s unique role appearing in the last third of this prayer. Roberts doesn’t think Paul has the division between Jew and Gentile in the temple precincts in mind in 2:14, only the metaphorical role of the Law, yet surely it is both/and. He affirms that a “substantial number” of “recent commentators” argue for “capstone” instead of “cornerstone” in 2:20 but cites only Markus Barth (from 1974!), and I am at a loss as to think of more than a small minority of commentators at any period of time who have adopted this view.

Roberts’ illustrations in “Live the Story” sections include some very helpful and riveting narratives—whether from Les Misérables (in book form), or church history viewed through the eyes of Rodney Stark, or a study in the Journal of Experimental Social Psychology or a popular report in the Huffington Post. But a plurality of his illustrations come from his own years of pastoring a large California Presbyterian church and his parishioners, appropriately given pseudonyms, there. Indeed, it is easy to imagine him having preached through Ephesians and having used many of these in sermons. Again, maybe it’s just because Cohick set such a high standard, but the breadth of sources, including contemporary international, multi-denominational, and multi-ethnic stories, that was to have been a signal feature of the series doesn’t quite seem to be present.

So is this a good commentary? Yes, it most assuredly is, especially given the scope and purposes of the series. The series was designed in part as the next generation of resources akin to Zondervan’s NIV Application Commentary series, after the publisher decided not to commission second editions of the NIVAC. As each volume appears, then, I find it interesting to see if I’m prepared to make the SOG volume my go-to volume for application. For Philippians and Romans I am. For certain others, I’m not. With Ephesians, Klyne Snodgrass did such a magnificent job in the NIVAC that I could wish he had been given the chance to update it or at least write the SOG volume. Since he wasn’t, his NIVAC will still be my top choice for this particular genre of commentary on Ephesians.