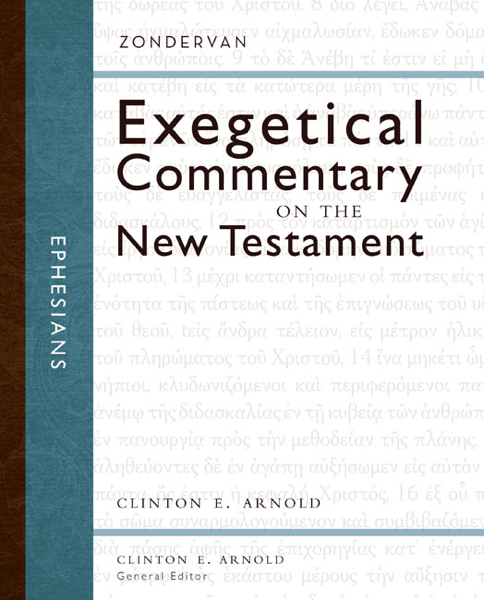 Dr. Clint Arnold, the author of the present volume, also serves as general editor of this series putatively designed to be of special use to the pastor and Bible teacher. The accompanying Denver Journal review of T. Schreiner, Galatians, ZECNT, outlines many of the common features of the entire series, and I will not repeat them for this review. Arnold, a professor of New Testament at Talbot School of Theology, is a well-published expert on various matters pertaining to the Ephesian and Colossian letters, in addition to such ancillary issues as “principalities and powers” and “spiritual warfare” (and so see, e.g., the inset discussion on pp. 112-114). The present commentary represents his mature thinking on the message of the letter. A particular focus of the commentary series also points the reader to very useful sections entitled “Theology in Application.” For one example on p. 123 Arnold gives this counsel: “Pray regularly that fellow believers will be enabled by the Spirit to understand the vastness of God’s power for them.” He goes on, “The good news of this passage [Eph 1:15-23] is that God does intervene and involve himself in our lives” (ibid.).

The Introduction section would be considered surprisingly short (40 pages) were we to judge it according to the standards of a critical commentary. But for his audience, Arnold covers the central issues concisely and particularly with an eye to contemporary application. Siding with H. Hoehner and F. Thielman but against most modern critics since Westcott and Hort, Arnold concludes that the words “in Ephesus” are authentic, part of the original letter despite the absence of the phrase in the earliest and “best” manuscripts. The introduction gives special attention to areas of Arnold’s expertise: the religious environment of Ephesus (Artemis and other deities), magic and folk beliefs, and the emperor cult. He provides seven telling arguments for embracing Pauline authorship–a view that evangelicals, with a very few exceptions (viz., J.D.G. Dunn, A.T. Lincoln, and R.P. Martin), have uniformly supported.

Arnold also adopts the traditional view of Paul’s Roman imprisonment as the place from which he wrote this letter (c. AD 60-62). For Arnold, Paul’s purpose is to affirm the Ephesians in their new identity in Christ, to fortify them in their ongoing struggles against the powers of darkness, to promote unity, and to stimulate the transformation of their lifestyles (p. 45). On the relationship of the letter to Colossians, Arnold rightly, in my view, sees them both as coming from Paul’s pen in close proximity addressing overlapping, though in some cases distinct, issues. In opposition to Witherington’s rhetorically-based approach (see his Socio-rhetorical Commentary on the Captivity Epistles), Arnold fails to see that as useful for understanding the message of Ephesians and so does not analyze its contents using rhetorical critical categories.

Concerning the plentiful use of plural language and appeals to the recipients, Arnold sees both individual and corporate ideas in view, depending on the context. When Paul avers that God chose “us” (1:4), Arnold says, “The usage of the verb suggests that God chooses individuals and together they comprise the group” (p. 80). Since this is disputed among commentators (some take this to refer to God’s choice of the corporate body in Christ, not of individuals to populate that body), it’s surprising that Arnold never explains what “usage of the verb” he means or why this is so clear for him. It would help students and pastors to know what reasons he adduced to arrive at this conclusion. At the same time Arnold observes an almost monotonous repetition of “in Christ” language that Paul employs to stress the importance of incorporation in Christ as the source of the believers’ spiritual blessings (p. 91).

Arnold displays an impressive interaction with the major scholarly literature–though in a helpfully restrained manner, given his target audience. He addresses all the thorny issues in a balanced way. His discussion of 1:23 provides a ready example: Arnolds sets out the interpretive options and systematically and very clearly explains them and shows how he comes to his own conclusion. His take? “…the church is filled with power and grace from its exalted Lord, who, in turn, extends his reign throughout heaven and earth through the church. The church accomplishes this through dependence on the one who fills her and by proclaiming the gospel and manifesting the kingdom of God to all in an extensive way” (p. 120). In applying the message of chapter one, Professor Arnold has wise words that include these: “As Western culture–through the influence of postmodernism–more and more embraces the value of spiritual experience, we will need to keep in mind that there is a form of spiritual experience that comes from a power other than the God of our Lord Jesus Christ” (p. 124). Yet, he adds, our God is greater than all rivals.

Arnold sees the “works” that God has prepared for his people (2:10) as the path that would characterize Christians’ lives throughout their journeys. As to “the dividing wall” (2:14), Arnold believes Paul “clearly” has in mind the literal balustrade in the temple complex in Jerusalem that excluded the Gentiles from ever coming near the sanctuary, and which here symbolizes the division between the races that God has destroyed in Christ. Arnold adds that when Paul modifies “wall” with the qualifier “the fence,” he refers to the Mosaic code (that also separated Jews and Gentiles). Christ is the “cornerstone” of the church’s foundation, not capstone (2:20).

Challenging Walter Wink’s contention that the church is to preach to the Powers, Arnold rightly sees Paul’s words in 3:10 pointing to what the powers learn about the wisdom of God through the church’s very existence. They come to see the unfolding of God’s plan (á¼¡ οá¼°κονομá½·α) for the ages expressed in 3:9.  After setting out fully seven options for explaining Paul’s four-dimensional reference in 3:18, Arnold carefully defends his view. In short: “Paul wants them to be confident that God has the ability to carry out his loving plan of redemption” (p. 216).

I think Arnold strains too hard to find a way to affirm that Paul did not “tamper” with the original intent of Psa 68:18 when he uses it in 4:8. Arnold suggests that based on a targumic, a Coptic, and an old Latin rendering of Psa. 68:18, Paul may have used these variants for his own wording that, in Paul’s understanding, accurately explained the meaning of the Psalm. Arnold also adopts the view that “the lower parts of the earth” (4:9) is a literal reference to the underworld (or Hades) but not agreeing that this refers to Jesus’ freeing Old Testament saints from their captivity as a result of his victory on the cross. In 4:11 Arnold finds five leadership roles, not four (the fourth commonly called pastor-teacher or teaching shepherd). Their function is to equip the saints for their (the saints’) work of service to build up Christ’s body (4:12). The old self (4:22) refers to believers in solidarity with Adam in sin, in contrast to their new position (the new self) in Christ. “Be angry” (4:26) is in iterative present command; anger “should be felt and expressed on certain occasions” (301).

Arnold defends the traditional understanding of 5:18 that the Holy Spirit is the content of the filling, not the means (filled by the Spirit; pace the Ephesian commentaries by Best, Hoehner, and Klein, and Wallace’s Grammar, loc. cit.) or the sphere in which the filling occurs. Interestingly, “mutual submission” (5:21) is not the result of the Spirit’s filling but the “prerequisite to the reception of grace from the Spirit-endowed members of the body” (p. 355). Submission is the means for filling. In his discussion of the “household code” of 5:22-33, Arnold includes an extensive and instructive discussion of the roles of wives in Roman-era Ephesus and Western Asia Minor.

I have picked several issues to show both some of the conclusions to which Arnold has come, as well as to highlight the valuable service he has rendered to our understanding of this important epistle. I have picked some of the exegetical highlights–not that I agree with all his conclusions–but have largely ignored what I said was a great value of his work at the outset–the wealth of practical and wise insights for applying the message of the letter for believers today. Just reading the theology and applications alone would prove a useful and spiritually edifying practice. What Arnold says is that good. I would recommend this work to all who want to see the importance of Ephesians for followers of Christ today. He shows how relevant Paul’s insights are for us in this postmodern era.