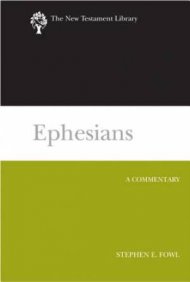 While in the past Romans and Galatians, as well as 1 Corinthians, have enjoyed the scholarly spotlight within the Pauline corpus, important commentaries on the shorter Pauline letters continue to emerge. Stephen E. Fowl, of Loyola College (Baltimore, MD), has written the commentary on Ephesians for the well-known New Testament Library commentary series. The first thing that one notices about this commentary, which is different from others, is the shape of the introduction. Fowl intentionally overlooks or treats with brevity a number of issues that one is accustomed to seeing in a typical commentary intro: historical background, provenance, readership, text, canon, etc. Rather, Fowl is more interested in the theological interpretation of the text (Fowl himself is well-known for his contribution to the field of theological hermeneutics). In his intro Fowl does offer a provisional outline to the book, but insists that “outlines are summaries of understanding already achieved on other grounds” (p. 6). Fowl remains agnostic about the precise identity of the readers, though he seems to recognize that Ephesus plays some role. But he is not troubled by this since the text itself reveals very little about the audience and the specific occasion for writing. Fowl opts for a general description of the occasion, where the readers lived in a world deeply influenced by spiritual things and a pluralistic environment, where a largely Gentile church needed to be reminded of their relationship to Israel and its promises, and where the church lived in a world indifferent to the church and the claims of the gospel. Yet, according to Fowl, the inability to be more precise does not hinder us from discerning the theological message of Ephesians. Interestingly, Fowl spends most of the intro on the issue of authorship. After surveying reasons for and against Pauline authorship, Fowl once again admits agnosticism. But he remains unbothered by this, since in his opinion the theological message of Ephesians and its function within the broader Christian canon does not depend on Pauline authorship, and whether Paul wrote the letter or not does not solve the text’s interpretive problems. While there is some truth to this, at the same time the early church’s insistence on truth and importance of apostolic authorship would seem to suggest that the problem of deception will not go away. Furthermore, if Fowl is correct, then we can no longer use Ephesians to construct a Pauline theology. At best it tells us how Paul was interpreted early on (by one of Paul’s followers?). In other words, there are important implications for decisions regarding authorship of Ephesians.

One of the important contributions of Fowl’s commentary to interpreting Ephesians is its focus on the theological message of the text. Not content with only the historical and grammatical issues, and refreshingly not entangled in issues related to hypothetical sources or backgrounds, the author explores the theological implications of the text. For example, Fowl insists on reading 4:3-6 and other sections in Trinitarian terms. His treatment of “redemption” in 1:7-8 contains a full discussion of the theological implications of the exchange imagery, whether it includes the notion of payment of a price, and avoids reading too much into the imagery (as if Christ’s death on the cross was a form of currency). Fowl’s emphasis on a theological reading of the text can also be seen in his frequent use of Patristic literature. This is not merely for historical interest but is consistent with Fowl’s practice of theological hermeneutics. For example, in his discussion of God’s great love for us in 2:4, Fowl unpacks this phrase with the help of Thomas Aquinas’ four specific ways that God shows his love toward us: God 1) brought us into existence; 2) made us capable of enjoying his beatitude as created in God’s image; 3) renewed us who were corrupted by sin; 4) gave his own Son for our salvation (pp. 72-3). However, one of the potential weaknesses of Fowl’s approach is to confuse textual ambiguity with theological fullness. In his discussion of “faith in (of) Him (Christ)” in 3:12, Fowl draws attention to the debate over whether this is faith in Christ (objective genitive) or Christ’s faithfulness (subjective genitive). Fowl concludes that little hangs on making a sharp distinction since “[b]oth are possible, both fit the larger context, both convey theological truth, and both can be understood here” (p. 113). In 4:6 Fowl notes the ambiguity with the word “all” as to whether it is masculine referring to people, or neuter having cosmic connotations. Fowl exploits the “fruitful ambiguity” (p. 135) and reads both in the text. Fowl prefers the reading in 1:23, “the fullness of him who is filled [passive voice participle] in every way,” while admitting the possibility of the alternative “the fullness of the one who fills [middle voice participle] all things.” But he concludes that one cannot assert one over the other on grammatical grounds and insists that from a theological standpoint there is no reason to choose. While he questions whether the reference to “by the washing of water in the word” in 5:26 should be taken as a reference to the rite of baptism and that the first readers would have understood it this way, he still suggests that it is the most likely option and “is the most theologically rich way to read the text” (p. 189). But grammatical or textual ambiguity cannot be confused with theological richness.

One of the most valuable sections in the book is his treatment of the ethical injunctions in chaps. 4-5. Here Fowl convincingly demonstrates that the imperatives throughout this section are aimed at the common life of the church, not primarily for individual piety as they are often read. In other words, the virtues articulated in this section can only be practiced in relationship to others within the Christian community. Likewise, the vices listed are destructive to the common life of believers (5:3-14). In this way, the church is to stand as an appealing alternative to the world. Pastorally, what this means is that fleeing the church at the first hint of trouble, dispute, mistreatment, etc. is not an option for the Christian. If the church were a perfect community, Paul would not need to issue such commands that center on repairing fractures among God’s people. Rather, these commands assume that it will happen! But rather than flee, God’s people are called upon to repair and restore relationships before a watching world. As Fowl goes on to correctly demonstrate, this is how Satan attacks the church (6:10-20), by sewing discord and disunity, and the church responds in spiritual warfare by refusing to allow divisiveness to disrupt the common life of God’s people through following Paul’s instructions in chaps. 5-6.

All in all, Fowl’s work is a helpful reading and a corrective to commentaries that are grammatical and historical, but dull to the theological dimensions of the text; though the latter often overtakes the former in his comments on the text. As seen in my previous comments, it is often full of insight relevant to the church today. Fowl’s work will probably not be the first commentary one turns to, and there is not much that is unique. But it is a helpful and clear exposition of the text that will supplement more detailed works on Ephesians.