Excellence: The Character of God and the Pursuit of Scholarly Virtue 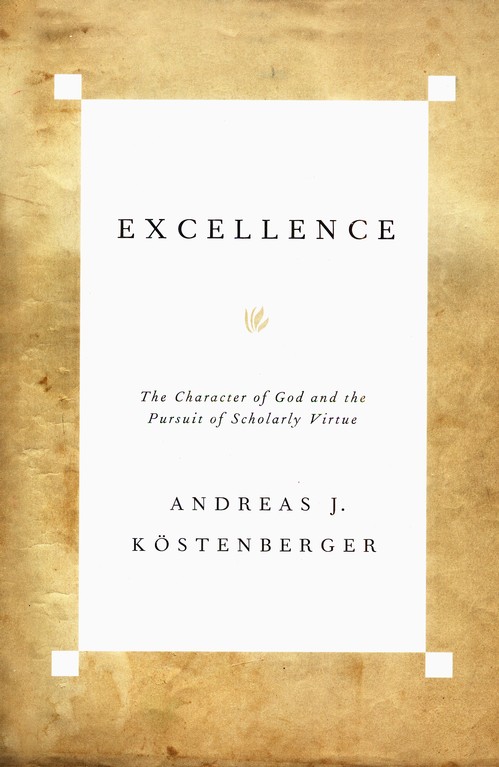 When Al Davis became the owner of the Oakland Raiders in the early 1970s, he famously coined a slogan that has served as a rallying cry for the team and its fans to this day: “commitment to excellence.” For every one of his players who were privileged to don the silver and black, Davis demanded these words be emblazoned on their minds and, more importantly, exemplified on the field of play. Mediocrity was simply not an option. Of course, just how well the Raiders have performed up to Davis’s idealist standard, I leave for more avid fans of the game to debate. What I find interesting about Davis’s motto is how well it captures the essence of God’s command to Christians. Throughout the Scriptures, Christians are called to nothing less than a commitment to excellence.

In his recent book called Excellence: The Character of God and the Pursuit of Scholarly Virtue, Andreas Köstenberger examines God’s high call of excellence to his people. He remarks how little biblical and theological treatment has been given to this topic, and then proceeds through the opening chapters of his book to establish its importance to Christian thinking and living. What Köstenberger offers is general enough to challenge and encourage any Christian who hungers for deeper growth and fellowship with God. But his target audience is the Christian scholar. He writes to admonish them “not to sacrifice their scholarly integrity for the sake of attaining academic respectability” (24). And each of the virtues Köstenberger presents is focused on helping scholars toward this end.

Excellence is divided into four larger parts. In part one, Köstenberger grounds the Christian scholar’s pursuit of excellence in the nature and character of God, who is the beginning and end of excellence (34). Because of their new nature, believers have the power to imitate God, making his excellence the distinguishing mark of who they are and how they live (38). Köstenberger employs 2 Peter 1:3-11 as a model for the development of virtues that lead to excellence. As Christians grow in virtue, they become effective ministers for the kingdom of God. Conversely, to the extent Christians ignore the cultivation of virtue, they become unproductive in God’s service. Köstenberger also takes a couple of chapters to unpack the relationship between excellence and holiness and excellence and spirituality. He articulates, for example, the concept of abiding in Christ and the importance of cultivating spiritual disciplines as necessities for achieving Christian excellence.

In part two, Köstenberger launches his discussion of biblical and scholarly excellence in earnest, highlighting six virtues which he places under the heading of vocational excellence: diligence, courage, passion, restraint, creativity, and eloquence. For each virtue, Köstenberger provides a short discussion and definition, followed by some biblical-theological support and examples of how the particular virtue should affect Christian scholarship. For example, Christian thinkers should embrace the value of working assiduously to increase and advance knowledge in their field of study. They should not be lazy and squander their time and talents. Instead, they should plan well and follow through on the tasks necessary to produce credible, cogent material. Furthermore, Christian scholars should be courageous, taking their stand with God and seeking his approval, regardless of the scholarly opposition they encounter.

Part three is about growth in the area of moral excellence. Here Köstenberger emphasizes the virtues of integrity, fidelity, and wisdom. He stresses the paramount need for Christian scholars to be faithful to the Word of God, as well as their colleges and institutions, so long as the truth is not compromised. Köstenberger also articulates how vital wisdom is for scholarship. Regardless of what one knows and how well they know it, unless that knowledge is incarnated in the life of the scholar, he or she will fail to think and act with godly wisdom.

Finally, in part four, Köstenberger speaks to Christian scholars about cultivating relational excellence. Learning to be full of grace, humility, and love through one’s writing and teaching is of supreme value to the mission of God in the world. Christian thinkers must not think of themselves more highly than they should. Rather, they must work hard to mitigate whatever cravings they have for respectability and approbations from others. When they disagree or come under criticism, they should conduct themselves honorably, giving the Spirit of God room to correct and teach them.

Pursuing excellence through Christian scholarship, Köstenberger concludes, cannot be achieved without a proper attention to personal holiness and spiritual transformation. Developing the mind will certainly make the Christian thinker more competent in his academic work, but unless he or she gives equal energy to the development of their character, the quest for excellence only results in the idolatry of self. True excellence, the kind that pleases God, is found in the Christian scholar’s submission to the power and purpose of God that is displayed through his rigorous commitment to holistic and virtuous wellbeing.

Excellence offers a salient and unique contribution to the field of Christian scholarship. Though the topic of Christian virtue has received richer philosophical discussion in recent decades, it is encouraging to find a strong treatment of the Scriptural and theological importance of virtue in the Christian life. Köstenberger lays down a sound biblical and metaphysical base of virtue rooted in the nature and character of God and the Christian’s call to imitate him. From here, he offers an incisively refreshing discussion about the balance Christian thinkers should strike between their intellectual and spiritual formation. For any Christian academic who wrestles to develop a genuine love for God that finds its home in the heart and not just the mind, this book provides some highly practical ways of how to grow holistically.

Notwithstanding its emphasis on Christian scholarship, Excellence is also wonderfully tailored to speak to the importance of virtuous development for all Christians, regardless of their vocation. I recently had the opportunity to use this book in my church’s adult Sunday school class, as I presented on the topic of virtue. To my delight, the class found this material both intellectually accessible and spiritually challenging. Köstenberger is concise, straightforward, and passionate in his appeal to believers to think and live excellently.

Where Köstenberger may portray a slight weakness regards his discussion of virtues that accord little with either biblical or philosophical tradition. One wonders, for example, in what manner things like creativity and eloquence can truly be considered virtues. Would it not be more appropriate to categorize these two as skills or abilities to be developed? It seems Köstenberger may be inclined to agree that creativity and eloquence are not virtues in the classical (e.g., prudence, justice, and courage) or theological sense (e.g., faith, hope, and love). At the outset of the chapters concerning each, he qualifies his use of these terms; conceding that they probably stretch the notion of virtue and are, therefore, understandably unexpected by the reader. However, in light of Köstenberger’s attention to scholarship, his discussion of creativity and eloquence are not without merit, nor do they feel excessive or too out of place in the book.

On the whole, Köstenberger’s book is highly instructive and richly apropos for those who are either thinking about or are well-seasoned in the discipline of Christian scholarship. Training oneself to think rightly about the truth of God and how best to convey that truth to others is, of course, crucial to the survival and saliency of Christianity in the marketplace of thought. The Christian scholar’s call, however, extends beyond the commitment of their mind to excellence. Such scholars must endeavor to make the truth of God a visible expression of how they live.