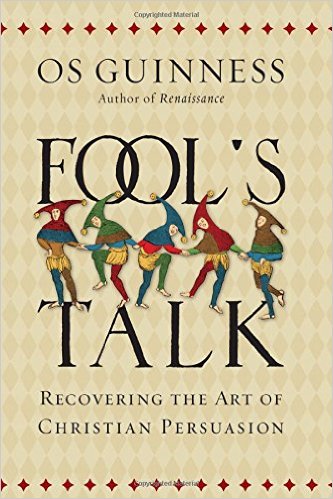 Os Guinness is one of the well-known voices in the realm of apologetics. He is the author of several bestselling books: The Call, A Free People’s Suicide, and Renaissance. Guinness is a leading social critic, is notable for his rejection of postmodern relativism. The thrust of his most recent publication is the resurrection and recovery of the art of persuasion within the Christian faith.

The title of the book, Fool’s Talk, is fitting for how truth-telling apologists are often misunderstood and rejected by the broader culture. But what seems as a fool’s talk to the broader culture is properly understood as wisdom from God’s perspective. The book unfolds in three parts: chapters one through five establish the need for recovering the art of persuasion, chapters six through ten explain how this need is accomplished; chapters eleven through twelve direct how Christian are to respond.

Guinness’s apologetic framework is solely built upon the authoritative truth of Scripture. Five doctrines comprise this framework: creation, fall, incarnation, cross, and the Spirit of God (p.27). He claims true apologetics is an art of both persuasion and proclamation. Guinness admits that modern apologists are skilled at proclaiming truth, but often neglect persuasion, and thus, his reason for writing this book. He defines the art of apologetics as essential groundwork to good evangelism, just as the art of evangelism is an essential outpouring of good apologetics. This requires both realms to work together toward the advancement of God’s kingdom.

He is not attempting to create a foolproof method for either apologetics or evangelism. Guinness asserts the impossibility in offering an irrefutable method to reach all people, and urges Christians to avoid such gimmicks. He claims face-to-face interactions are the best ways to engage unbelievers. Modern technologies, however, divert people from such experiences. The goal of the Christian disciple is to create personal interactions to engage unbelievers.

Guinness also advocates for Christian discernment propelled by God’s love for people. Winning people to God’s absolute truth is important and requires Spirit-led discernment by the apologist to each situation. Appropriate approaches consist of listening to and understanding the unbeliever’s situation. Guinness is eager to instill Christian apologists with discernment towards unbelieving people who are not open to hearing God’s message.

Fool’s Talk offers the courage, confidence, and discernment needed for Christian disciples to engage unbelievers with God’s love. It challenges Christians to love unbelievers and not to fear the bombastic claims of the broader culture. It also requires Christians to part ways with opposing worldviews by confidently clarifying their own worldview, and in this independence, seeks to bring unbelievers toward belief. In the final chapter, Guinness describes Christians as God’s guides who assist unbelievers along their journey toward God. Every Christian is called to persuade others and proclaim the truths of God through both apologetics and evangelism, but to unbelievers, Christians will be misunderstood as talking fools.