Four Views on The Spectrum of Evangelicalism 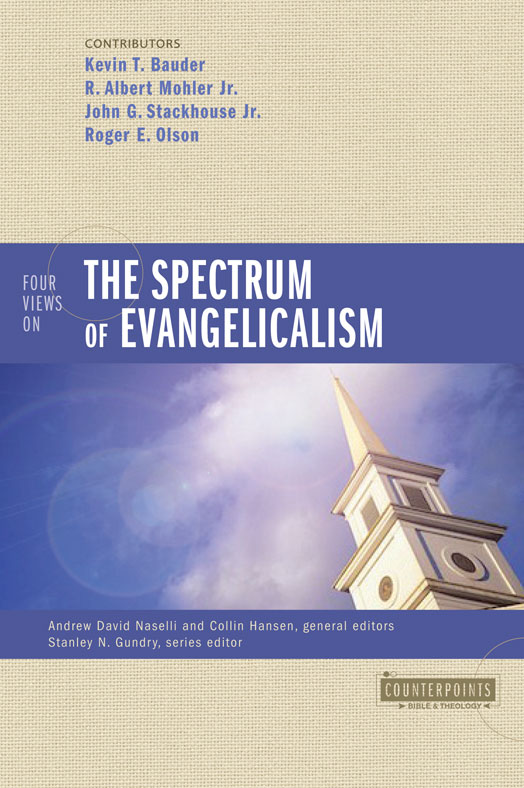 A noted church historian who was a friend and mentor of mine once remarked that, “Defining Evangelicalism is like trying to nail jello to the wall!”  He was probably right and Four Views on the Spectrum of Evangelicalism illustrates his point.  As part of its Counterpoints series on key biblical and theological themes, Zondervan editors Andrew Naselli and Collin Hansen have brought together a distinguished panel of four scholars to debate the definition, nature, and distinguishing marks of this prominent element of American Protestantism.  Given that American Evangelicals currently number somewhere around 75 million and incorporate a diverse collection of groups, peoples, and churches, this is an important and necessary task.  Yet, as the title of this book reveals, there is a spectrum of Evangelicalism that makes any analysis of the movement more than a little difficult and, sometimes, a little messy.

The contributors to this volume lay out four different interpretations of what evangelicalism is – or should be – all about. Following a helpful introductory chapter on the history of the movement by Collin Hansen, Kevin T. Bauder proceeds to argue for Fundamentalism, R. Albert Mohler Jr. for Confessional Evangelicalism, John G. Stackhouse for Generic Evangelicalism, and Roger E. Olson for Postconservative Evangelicalism.  Each author provides a definition of the movement, locates his particular view in history and then gives his perspective on the nature of Scripture and authority vis-à-vis Evangelicalism.  In addition, they all address three issues recently contested by various elements within the evangelical camp:  the question of Christian cooperation as illustrated by Evangelicals and Catholics Together (ECT) and the Manhattan Declaration, the debate over open theism, and the importance of penal substitutionary atonement as a defining element of the Gospel.  And to provide a pointed comparison and contrast between the four views, each essay is critiqued by the other three contributors along the way.  A very useful summary by Andrew Naselli concludes the book wherein he re-states the main views of each author, as well as eight different observations he has made related to the overall debate.

The primary strength of this volume is the concerted effort that the contributors and editors make to give a thoughtful analysis of this important and notoriously challenging topic.  Given the current dominance of Evangelicalism within American Protestantism, this is an important step to take for the future health of the movement.  And while this book is more or less academic in its bent, the debate over what constitutes an evangelical is neither trivial nor merely academic.  As the culture around us changes and new expressions of Protestantism arise, it is certainly worth our time and energy to investigate this specific stream of Christian faith and where it seems to be flowing.  Such efforts can help provide evangelicals a sense of institutional and theological stability in an ever-evolving environment.

Two additional assets of the book are the introductory chapter by Hansen and the conclusion by Naselli.  Each knows of what he writes, is crystal clear in his presentation and lays out the terrain for both the novice and the experienced traveler as they walk thru the various contours of Evangelicalism.  I personally appreciated the historical background that Hansen gave and found myself agreeing, more or less, with Nasell’s observations in the conclusion.  Each of these elements provided a thoughtful reflection on the background and trends within the movement that professors and pastors can leverage for the benefit of students, parishioners, and colleagues.

But in the end, Four Views on the Spectrum of Evangelicalism is a disappointing book for a number of reasons.  Perhaps the most obvious one was the choice of a fundamentalist to serve as a main contributor to a book on Evangelicalism.  The latter movement arose from the former in the 1940s and intentionally left it behind, thereby creating two entirely separate elements within the broader framework of American Protestantism.  While Bauder’s essay and comments are well written and academically respectable, their inclusion in this volume seemed odd and out of place.  Fundamentalism appears to be withering on the ecclesiastical vine and some of Bauder’s comments validate that observation.  Moreover, almost no one I know or minister to would ever consider moving out of Evangelicalism and into the Fundamentalist camp because of its ongoing demand for cultural separation.  Perhaps that makes evangelicals more worldly but the social and ecclesiastical contexts inhabited by those who label themselves fundamentalists seem light years away from the vast majority of American church-goers, evangelical or otherwise.

A second major flaw in this work is the unintentional but somewhat narrow representation of the contributors.  They are all middle-aged white male academics and reflect that in their essays and comments.  That’s not necessarily bad but given that innumerable African American and Asian American churches consider themselves evangelical and an ever-increasing number of Hispanic churches do likewise, makes this volume more limited than it might otherwise have been.  As a middle-aged, white male baby-boomer evangelical myself, I recognize that my perception of our movement is heavily influenced by a certain experiential and cultural lens.  A broader range of perspectives really is necessary if our understanding of Evangelicalism is to be both accurate and useful moving forward.  While Anglos currently dominate the evangelical scene, this may not be the case in the coming years since most Anglo churches are not growing nearly as quickly as African-American and Hispanic congregations.  I realize that some of the contributors to this volume might be hesitant to include some of the latter in their definition of evangelical for doctrinal reasons, but I take a ‘big tent view’ per Stackhouse and desire to see our movement expand rather than contract.

A third weakness of this book is one with more ominous overtones for the future of Evangelicalism.  In his conclusion Naselli makes the astute observation that, in essence, Bauder and Mohler are essentially allied with each other, as are Stackhouse and Olson.  Thus, instead of a spectrum of four views – or at least three that are self-consciously evangelical – we really have only two: the right wing and the more center-left wing.  I’m not disagreeing with Naselli’s assessment; I think it’s accurate.  What bothers me is the direction each side or perhaps the more narrowly minded members on each side want Evangelicalism to go.  On the right, Bauder admits that hyper-fundamentalism dominates his ecclesiastical family and that they demand separation for both doctrinal and cultural reasons.  Mohler seems sympathetic to this and argues strongly for doctrinal separation based on Reformed theology.  But certainly many who are more Arminian in their theology can be labeled evangelical.  Historically, John Wesley may be the most prominent example of this.  If anyone was ever committed to the evangel, it was he!  To define Evangelicalism by what Mohler calls a “boundary-set” of doctrines does, in reality, create a Protestant magisterium that defines who is in and who is out of the evangelical camp.  I’m not arguing that theology is unimportant; on the contrary, it is crucial.  But the foundational question here is ‘Who gets to decide?’  My own suggestion is to use the NAE statement of faith as the litmus test of evangelical orthodoxy.

This takes me to my concern about the other side of the spectrum, represented by team Stackhouse/Olson.  Both seem to agree with each other on the majority of issues, although Olson admits they may place a different emphasis on certain key doctrines and practices.  He goes on to argue strongly for a “centered-set” definition that can best be described as a “generous orthodoxy.”  So far, so good; but he also qualifies that by stating that it is very difficult to really determine who is, and who is not, an evangelical (p. 163).  This is neither good nor true.  Olson wants to emphasize the value of the Great Tradition of the Creeds as a test but then seems hesitant to exclude those who would reject this Tradition.  He can’t have it both ways.  I agree with him that Evangelicalism is a movement but if generous orthodoxy is a core commitment, then the orthodox portion must be preserved and applied.  As I noted earlier, I take a “big tent” view of our movement but that does not mean just anyone can be included.  If and when someone rejects this or begins to drift away doctrinally, that automatically takes him or her out of the camp and into either liberal Protestantism or some other form of Christianity that cannot be labeled historically orthodox.  This contemporary reality requires us to speak the truth in love and honestly declare these folks “non-evangelical.”  It does not mean we’re pronouncing on their eternal destiny; it does mean that those of us who are doing our best to uphold some “centered set” definition of contemporary Evangelicalism recognize that some folks simply are not part of “us.”  And that’s okay.

All this being said, I would still recommend this book to specialists in the field of American Christianity and to those who are concerned about the direction of contemporary Evangelicalism.  I’m fairly confident that every reader will find things to agree and disagree with in this volume, making for some additional interaction and maybe even some further clarification moving forward.  My mentor was correct in his observation that Evangelicalism is a “jello-like” movement.  But, on the positive side, this book helps to add more substance to the mix.  For that, as well as for their hard work in putting it all together, we can thank its contributors and editors.