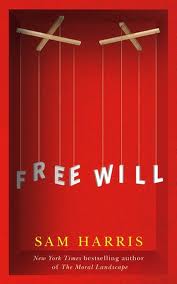 Most people acknowledge that humans are capable of acting freely.  Individualism, for example, rests very heavily on the premise that the benefits of success in life come from one’s freedom to work hard.  To reject free will does not only oppose our intuitions, it also entertains disturbing moral, political, and economical implications.  Nevertheless, Sam Harris drives against the force of popular opinion in Free Will provocatively maintaining that free will is an illusion.  This brief introduction of the doctrines of free will—all of 83 pages—articulates the seriousness the topic demands, but contains fundamental philosophical errors.  Since the thesis of free will is prima facie true, this work carries the burden of proof to show that it is merely an illusion.

The introduction of the book rightly demonstrates that if free will does not exist, disturbing moral implications follow:  humans cannot be culpable for actions where no other choices were possible.  Nevertheless, Harris believes that it still benefits us to live as though it does exist.  If a man has a gun to his head, he is going to choose the way that is already determined.  According to Harris, since setting down the gun is better than pulling the trigger, a man ought to “choose” to set the gun down.  If it does become the man’s course of action to set down the gun, it was not a choice at all, but a pre-programming of his brain.  It is stealing capital from free will theorists to use the word “choose,” since there is only one possible course of action.  More importantly, however, the question should be raised as to what it means to have “free will,” but ironically no such analysis is given in this book.

The argument in Free Will can be simplified as follows: (1) If determinism is true, then free will is an illusion; (2) determinism is true, (3) therefore, free will is an illusion.  A study conducted by physiologist, Benjamin Libet, detects activity in the brain by an electroencephalogram (EEG) some 300 milliseconds before a person “feels” a decision to move.  Harris suggests that this data provides evidence that every decision we make is already pre-programmed in our brain.  If the Libet study can demonstrate that unconscious brain activity is always prior to a conscious decision to act, then it carries great force in arguing for the truth of determinism.  Harris, however, omits a crucial discussion between the nature of conscious and unconscious mental activity.  Buried in an endnote there is one small morsel of information simply indicating that there is a distinction between conscious and unconscious mental processes, but failing to provide analysis.

Why are we required to believe that specific unconscious brain activity entails—or even correlates to—a particular decision that a person will be predetermined to make a moment later?  An EEG does not specify what electrical signals are associated with particular decisions a person makes.  For example, imagine an EEG detects electrical signals from Susie’s brain, only to find out that a moment later Susie uses her left hand to scratch her nose.  How do we know that those electrical signals have any correlation with Susie’s conscious decision to scratch her nose?  It is quite possible that the electrical signals instead are associated with her unconscious brain activity controlling a nervous movement Susie has in her right hand.  Harris fails to properly explain the association between EEG data and a person’s decisions to act.  Therefore, it is dangerous for Harris to apply Libet’s study as the force in demonstrating the truth of determinism since the human brain is still a largely unexplored frontier.

In Harris’s dismissal of libertarianism, he begs the question.  His short rebuttal for why we cannot accept libertarianism (the position that determinism is false) is that he believes “in every sense relevant to human behavior that determinism is true.”  To forfeit substantive treatment of libertarianism is a severe mistake since there are many eminent philosophers who seriously defend such a position.  Harris also falls into the straw man argument because instead of attacking libertarianism—the true enemy of his thesis—he uses all his energy to argue against compatibilism.  The compatibilist thinks of the nature of free will in such a way that does not allow genuine future alternatives; it requires that humans do what they desire to do despite the absence of true alternatives.  Harris rightly criticizes that if genuine alternatives do not exist, it reduces to determinism:  the compatibilist will say, “A puppet is free as long as he loves his strings,” but this to Harris is not free will in any robust sense.  These are essential questions that force compatibilism into further scrutiny.

Free Will is replete with repetition of the argument that in order for free will to exist humans must be able to choose all the time.  With what we know today about biology, genetics, environment, and what Harris calls “cosmic bombardment,” it is reasonable to agree that some decisions and events are determined by previous states of affairs:  for example, I had no choice on whether or not to be born into this world or that I am a product of my parents.  Even though there are circumstances that are causally determined, they do not demand that we acquiesce to determinism.  The fact that some states of affairs are determined does mean that free will might sometimes be an illusion, depending on how we perceive them.  However, it is not enough evidence to condemn agent causation.

If determinism is true, as Harris claims, then we have serious thinking to do about whether we are really free as humans.  Even if a person is not prepared to settle with the conclusion that free will is an illusion, one can still benefit from reading Free Will, especially as an introduction to more technical readings.  Perhaps Free Will’s most fruitful contribution to the discussion of free will is that it leads to a pursuit of self-reflection in the light of decisions we make, how we deliberate about them, and their original source.