Friendship: Exploring its Implications for the Church in Postmodernity 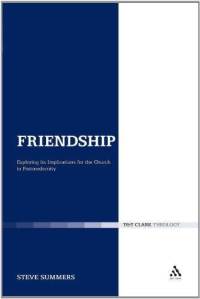 This is Summers’s dissertation, which was published in 2009, revised for a wider audience. It is written in the context of his work as a parish priest in the Anglican Church in the United Kingdom. Summers’s premise is that friendship, within the context of the Church, is the way for the Church to move from a group of “individuated persons with a common interest” to “being fundamentally interconnected.” Summers structures his argument in three parts: the rational and context for the work; friendship’s historical, theological, and interpersonal characteristics; and friendship’s ecclesiological application.

Summers begins and ends his argument with John 15:12-17 and Jesus’ declaration of the disciples as friends. He offers a brief overview of “friends” and “friendship” in the New Testament, illustrating the importance of friendship throughout the New Testament. Christ, in John 15:12-17, equates love and friendship with obedience. Summers points out that the obedience is a natural outcome of the love and friendship. This new “friend-friend” relationship between Christ and his disciples is one of mutually shared knowledge and loyalty. He has invited them into a “fictive kinship,” or non-biological kinship,  where their obedience is informed by their knowledge of God’s plan. An understanding of friendship as an intimate, passionate relationship between believers was foundational for the development of the community as “friends of Christ.”

Summers also explores the current cultural context. Summers writes that Postmodernism is accused “of offering only surfaces without depth: yes, there are pointers and markers, but perhaps only pointers and markers which have become reality because there is nothing behind them to point to.” (p. 29). Postmodern culture is based on the individual and the moment. There is a loss of continuity and connection with the past and the rest of society. This societal shift has led to lonely, disconnected people. This postmodern concept of interpersonal relationship is increasingly evident within faith communities.

In the second part of his book, Summers examines historical understandings of friendship beginning with Homer’s narratives. He identifies two strands of meaning: friendship as affection and obligation and friendship as virtuous and heroic. It is an intensely passionate bond where one would lay down one’s life for his friend. In Homer’s narratives, friendship is understood as being ordained by the gods. Though Summers is clearly focusing on friendship love rather than romantic love, he is not comfortable with identifying friendship as non-physical.

In looking at Plato, Summers disagrees with the common understanding of Plato’s friendship as utilitarian and instead reads in him an understanding of friendship consistent with Aristotle’s “true friendship.” This allows Summers to posit a consistent, ancient understanding of friendship which has been lost only in modern times. This reading does not have scholarly support and stretches Plato’s writings beyond the words written. Summers depiction of Aristotle and Cicero is consistent with most scholarship. Aristotle is typically credited with providing the first in-depth philosophical examination of friendship. Friendship is depicted as necessary, virtuous, and self-sacrificial. Pleasure and usefulness occur as a result of the friendship, but the friendship is based on the virtuous and harmonious character of the friends. This historical review would have been more complete if it had mentioned the shift to a utilitarian concept of friendship noted by later Latin writers such as Plutarch. This aspect of postmodernism is not that new.

Summers discusses the theological aspects of friendship from Augustine and Thomas Aquinas. He takes issue with Augustine’s “Christian friendship” as a different kind of friendship than “true friendship” more generally. Summers spends more time with Aquinas and the centrality of friendship with God as the primary relationship of believers from which all other relationships emerge. Friendship within the body of believers is based on the interpersonal relationships of the Trinity. Summers examines the idea of individual and interconnected community. He bases this in Eastern Orthodox theology, rather than the more hierarchical Western theology.

Summers uses the philosophy of Descartes, Nietzsche, and Derrida to understand the concept of self which is at the core of friendship. The self is only meaningful in relationship with other selves. Thus, postmodernism’s self-centered isolationism is self-destructive because it attempts to remove self-being from relationship-being. Summers embraces Derrida, rejecting Descartes’s detachment and Nietzsche’s will-to-power over the other.

In Part 3, Summers addresses the implications of friendship as the foundation of the church in a postmodern world. He shows the particularity of friendship as essential to the demonstration of love more broadly. It is in close, personal, particular friendships that we learn how to love so that we can love the world as Christ loved us. Summers notes that in close, communal settings such as monasteries, particular friendships must be managed with some caution to prevent divisions. His guide here is Aelred of Rievaulx.

Summers writes that gender should not be a limitation for friendship. Summers demonstrates an understanding of close, intimate friendships as often sexual. This sexuality is not confined to male-female friendships. He uses homosexual communities as an example of hospitality and boundary-less community. Engaging in sexual activity as a form of welcome is called “bodily hospitality” suggesting “vulnerability and honesty about one’s corporeality as the most basic (fundamental) thing that one can give.” (p. 146) From these communities, Summers extracts a useful critique of the conservative church, where the nuclear family is held as the building block of the church rather than the non-biological kinship engendered by Christ’s sacrifice. In New Testament times, such kinship was granted all of the rights and responsibilities of blood kin. This family-oriented focus excludes many of those whom Christ welcomed and included. Summers uses the homosexual communities because they are a group excluded and from their exclusion have formed communities that are more welcoming then many churches.

However, Summers understanding of close, intimate friendship as “friends with benefits” is problematic. Though he is cautious about applying modern definitions to ancient words, in this case, Summers seems to have accepted the current culture’s premise that all intimate relationships are sexual and then retrofitted that concept into the biblical narrative and the ancient writers. His concept of bodily hospitality is incompatible with biblical texts that reject promiscuity generally (e.g. Rom 13:13, 1 Thess 4:3) and homosexuality specifically (e.g. Rom 1:24-28). The offering of sexual favors as a part of hospitality is mentioned in the story of Sodom and Gomorrah in Genesis 19 and, also, in the story of the Ephraimite and his concubine in Judges 19. In neither case is this represented as desirable.  To accept Summers’ suggestion, the church would need to embrace the sexual immorality that was singled out for condemnation at the Jerusalem Council in Acts 15. Here Summers has strayed far from the text.