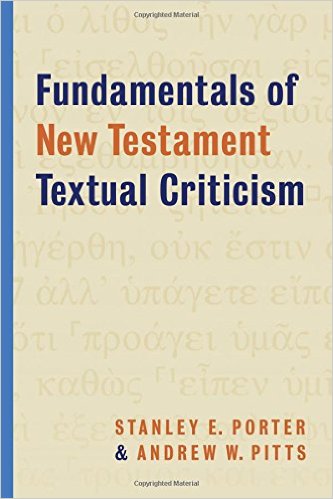 Stanley Porter has written on just about every area of New Testament studies with a prodigious output of scholarship rivaled by only a tiny handful of his peers. Often he has collaborated with students or former students at McMaster Divinity College, as he does in this work with Andrew Pitts.

I admit I was skeptical about the need for another primer on textual criticism with a number of good ones in print. Porter and Pitts’ selling point was that most of these were either too brief or too technical and that they were aiming at something giving full coverage to what students and scholars in other fields needed to know, without becoming too comprehensive or esoteric. By the time I finished the book I was convinced they were correct.

At the outset, Porter and Pitts distinguish between the traditional form of textual criticism that seeks to get as close to the original autographs as possible and a more recent sociohistorical model that tracks the transmission of the text without necessarily purporting to be able to get back close to the originals. To set the stage for the method, they discuss the formation of the canon so that we know which texts to analyze. Then they walk us through materials and methods of classification, the major witnesses to the New Testament text and text-types. Particularly significant here are reminders about the evidence of a higher degree of literacy, amount of circulation of books, and access to materials for book production than is often granted. Not surprisingly, since Porter has recently produced a biography of Constantin Tischendorf, he stresses the unparalleled contribution of this nineteenth-century “Bible hunter” to the discipline. As in most recent introductions, the viability of the Caesarean text-type is questioned.

More distinctively, our authors turn next to the consideration of what counts as a textual variant, given the nestings of variations among word clusters across the manuscripts. Meaningful units of thought have to be analyzed rather than a mere atomistic counting of differences. Four methodological chapters ensue, the first comparing and contrasting the stemmatic or genealogical approach, the Majority-Text advocacy, and thoroughgoing and reasoned eclecticism. Porter and Pitts rightly and adequately debunk the Majority-Text approach and recognize the prominence and value of reasoned eclecticism.  But then they advocate the single-text approach, arguing that to opt for the oldest and most valuable complete New Testament, Codex Sinaiticus, at least gives us a real text that was actually used, rather than a creation of modern scholars that does not correspond exactly to any one known text of antiquity. The only scholarship cited in favor of this approach, however, are three other studies by Porter.

The remaining three methodological chapters treat, in turn, weighing the external evidence and the internal evidence, the latter subdivided into transcriptional and intrinsic considerations. The most distinctive portions of these treatments involve, first, a brief refutation of much of Bart Ehrman’s The Orthodox Corruption of Scripture, showing that non-theologically motivated transcriptional errors account for many of his most celebrated examples of allegedly deliberate changes. Second, in weighing intrinsic evidence Porter and Pitts give more attention than most to elements of discourse analysis, a hallmark of McMaster in recent years, in recognizing what does or does not correspond to an original author’s style.

Finally, Porter and Pitts treat, in turn, a brief history of modern critical editions of the Greek text, how to read and use the text and apparatus of the two most recent editions of both the UBS Greek New Testament and the Nestle-Aland Novum Testamentum Grecae, and textual issues related to the most prominent recent English translations. An appendix discusses tools for further textual-critical study.

By and large, our authors succeed in their goals of giving readers fully adequate information to understand and engage in the discipline of textual criticism without overwhelming them with unnecessary detail in a work designed to provide “fundamentals.” The chapters on canon and translations seem somewhat extraneous, as if Porter was eager to get more mileage out of the research that went into his recent, excellent How We Got the Bible: Text, Transmission, Translation, whether or not it fit quite as well in this current volume. And the treatment of the various translations along a one-dimensional spectrum from formal to functional equivalence is not as helpful as a two-dimensional model that uses one axis for each with the ability to plot optimal equivalence (privileging neither form nor function but seeking to optimize as much of each all the time as possible, recognizing that neither will be as stressed as on either of the other two models).

These are minor quibbles, however. Overall, this is an excellent introduction that should serve a wide variety of readers well. Most all of them will probably need to have some solid biblical and theological grounding already, but that was Porter and Pitts’ target audience. Kudos for a job well done.