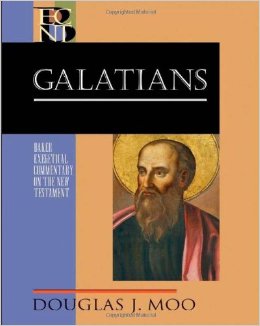 If the apostle Paul can lay claim to being the premier architect of Christian theology, then perhaps his letters to the Romans and Galatians stand out as most clearly articulating the nature of the “gospel” from and about Jesus Christ–and in the case of Galatians, defending it against a gross misconstrual. Professor Moo has already given the church a masterful commentary on Romans (in Zondervan’s NICNT series), and now he has written an impressive volume on Galatians. Moo is a professor of New Testament at Wheaton College Graduate School. In addition to many scholarly articles and essays, Dr. Moo has also written commentaries on James, 2 Peter and Jude, and Colossians and Philemon. He also serves as chair of the committee on Bible translation for the NIV.

First, let me offer some comments on the format of the BECNT. The layout is pleasing and very user-friendly. After the introduction to the commentary itself, each section begins with an introduction. This proves to be a very useful feature in which Moo introduces what will follow in the more detailed exegesis, but also anticipates what will be the key issues or interpretive problems and his solutions or conclusions. Then follows the biblical text of the NIV 2011; followed by a verse-by-verse exegesis and exposition (with verse locations helpfully placed in the margins of the pages); and finally additional notes of a more technical nature, typically, though not limited to, issues of textual criticism. Headers at the tops of the pages show the reader where one is in Moo’s outline of Galatians.

Documentation of other sources typically occur within parentheses in the body of the text, with a helpful number of explanatory footnotes where needed. The way the Greek (and Hebrew) text is presented is very useful for all levels of readers, even though it is at times cumbersome: original language orthography, followed by transliterated text, followed by Moo’s English translation. The overall feel of the commentary is very clean, and it’s easy for the readers to find their way through it. Prior to the indices, Moo includes an extensive 32-page bibliography of works cited.

The introduction includes the typical entries, with no major surprises on most matters. Though he notes that a decision is difficult, he “slightly prefers” the South Galatian  option for the letter’s destination and concludes (following considerable discussion) that Paul wrote it just prior to the Jerusalem Apostolic Conference, probably around AD 48. As to the letter’s purpose, Moo says “Paul writes Galatians to combat people who are pressuring the Galatians to undergo circumcision and submit to the law of Moses as a means of completing their Christian experience” (p. 19). As all interpreters of matters pertaining to the Mosaic Law must now do, Moo engages the so-called New Perspective. His discussion is very thorough and considers all the major players of late. Moo comes down on the side of the more traditional (Reformation) view that at its core, the problem with the Galatians’ Torah observance was that it involved “works” as the basis for salvation, not merely “works of the Law” as boundary markers (contra, e.g., Dunn and N.T. Wright).

Another crucial section in the introduction summarizes some of the basic theological conclusions of Paul’s letter: the importance of Galatians in salvation history (“Christ crucified” signals the climactic movement to a new stage), the emphasis of incorporation into Christ (union with Christ) as the foundation for justification and sanctification, the crucial role of the Spirit, and the abrogation of the Law for believers (though it may continue as a guide for the moral life).

As to the “faith of Christ” conundrum, Moo surveys the examples (including those outside Galatians), and comes to the “traditional” conclusion: it refers to Christ as the object of the believers’ faith, not Jesus’ own faithfulness (again, contra many recent studies). While acknowledging the value of rhetorical analysis, Moo concludes that it has very limited usefulness for the interpretation of Galatians.

Moo devotes a considerable section to unpacking the meaning of “Justification/Righteousness.”  He concludes that both δικαιόω (justify) and δικαιοσύνη (righteousness) refer essentially to conveying or possessing right standing with God, arguing extensively against N.T. Wright who contends that its meaning ought to be construed as “declared to be members of God’s people.” [Of course, for the full defense of his view on this, see Wright’s recent two-volume Paul and the Righteousness of God, which, of course, Moo did not have access to in writing the commentary.] While Moo agrees that membership in God’s people is important for Galatians, “justification” has to do with the believer’s status with God; its meaning is fundamentally forensic. The requisite means of justification is the believer’s faith in Christ. But, Moo emphasizes, in Galatians justification is not mostly a matter of “getting in” (to salvation or the body of Christ). Arguing that Paul’s references to justification are either timeless or refer to the future judgment, Moo contends that the burden of Paul’s argument focuses on “how the Galatians are to maintain their status of righteousness” (his emphasis; p. 60)–how one is vindicated on the day of judgment. In some ways, this sounds like the new perspective–staying in rather than getting in.

As to a few other noteworthy conclusions, Moo prefers to think of 1:13-17 as Paul’s explanation of a true “conversion,” that is, a thorough transformation. God’s revelation of his Son to Paul amounted to a conversion and a call. As to the Antioch incident (2:11-14), the underlying question was whether Gentile Christians needed to take on the Jewish law to attain full status within the Messianic community. Defending the distinction between justification and participation (union with Christ), Moo concludes that justification (one’s legal standing before God) takes place “in Christ” (2:16-17), fully secured by faith in Christ; and union with Christ results in transformation (sanctification). As to the latter point, “the spiritual state of believers is the product of their real identification with Christ in the redemptive events of his crucifixion, burial, and resurrection” (p. 171). That is why Paul says, “I no longer live” (2:20).

Moo contends that the use of paidagōgos (guardian; 3:24) is neutral or slightly negative (not a positive image that the Law served to lead Jews to Christ). It supervised (even in a condemning way) those under the law during their “childhood” until the time when Christ would come. All believers enjoy “sonship” (3:27-28) because in baptism they are incorporated into Christ (the Son) thus relativizing common religious, social, or gender oppositions. Moo argues, however, that this does not rule out distinctions in roles that Paul may teach in other places (see especially his discussion on pp. 252-55).

When, finally, Paul mentions circumcision in 5:2, we glimpse the true “presenting issue” that underlies the entire letter (4:10 shows that the Galatian believers were practicing other matters of the Law). So, if the Galatians submit to circumcision at the instigation of the agitators, what is the consequence for them? Moo’s answer: “Christ will be of no benefit to them on the day of judgment” (p. 322). In other words, “it is circumcision or Christ.” Circumcision represents the way of “doing” (the Law), which can never save; Christ represents the way of grace that leads to salvation. Hence Paul implores the Galatians to maintain their status of righteousness by rejecting circumcision and what it represents.

After the vice and virtue lists in 5:19-23, Paul says, “against such things there is no law.” Considering three options, Moo suggests Paul means that no law, including the law of Moses, condemns such virtues. In other words, “the Spirit produces fruit in the lives of believers and thereby provides for all that the law itself requires” (p. 367). Fulfilling the “law of Christ” (6:2) sets Christ’s “law” against the law of Moses and refers to the ethical demand of the gospel. To bear another’s burdens in to enter empathetically into their problems (6:2). To bear their own burden (6:5) is a reminder that “it is the total conduct of their own lives alone that will be evaluated by God on the day of judgment” (p. 381). The theme of living in view of judgment day features prominently also, in 6:7-10. Paul’s reference to “new creation” (6:15) is a “designation of the new state of affairs that the cross signifies and inaugurates” (p. 398). After a considerable assessment of the evidence Moo concludes that “the Israel of God” (6:16) is identical (following the epexegetical kai) to “all who follow this rule,” that is, “the Israel that counts before God, the Israel that will receive the blessings of peace and mercy,” the Church.

While this is an all-too-brief catalogue of some highlights of Moo’s conclusions, I hope it whets the readers’ appetites to dig in more extensively to the commentary. Moo takes into account all the evidence, including a careful unpacking of the grammar. Students of exegesis will learn much from his examples–judiciously assessing Greek grammar’s contribution to interpretation. He is fully abreast of contemporary understandings of Greek grammar (e.g., verbal aspect). His uses of word studies are also very instructive. Words can’t be studied in isolation from their contexts, nor can the mere study of individual terms presume to unpack the significance of a biblical concept. Moo’s command of the important background material is also noteworthy, whether that is Greco-Roman or Jewish and Old Testament. The only lack–and this is a decision made by the design of the series–is in the realm of application or contemporary significance. This commentary will illuminate Paul’s text in an exemplary manner, and I think it will stand apart from others for a long time in the successful way it does that.