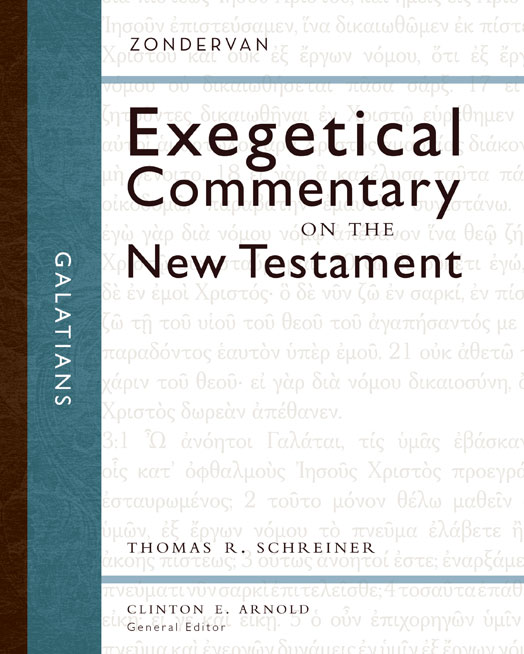 In past several years, Thomas Schreiner, who serves as James Buchanan Harrison professor of New Testament at Southern Baptist Theological Seminary, has become an influential evangelical voice in Pauline scholarship. He is known for his conservative reformed stance and his criticism of N.T. Wright and the New Perspective on Paul. His other publications include New Testament Theology: Magnifying God in Christ, Romans in the Baker Exegetical Commentary on the New Testament series, and recently, Interpreting the Pauline Epistles.

Galatians is the latest installment in the Zondervan Exegetical Commentary on the New Testament. The series currently has four volumes published (James, Matthew, Ephesians and Galatians) with a fifth forthcoming (Luke), and boasts such authors as Clinton Arnold, Grant Osborne, and Craig Blomberg. The ZECNT is characterized by its evangelical perspective, thorough scholarship, and emphasis on grammatical structure. Schreiner’s volume is no different. Each section includes a paragraph or two on literary context, followed by the portion of Schreiner’s outline which surrounds the passage being discussed.  After this, there is a brief statement of the main theme(s) of the passage. Then, the author’s translation is provided, in the form of a grammatical layout, followed by a section on structure and an exegetical outline. The verse-by-verse exegesis of the text follows, and each section closes with a “Theology in Application” portion. The book concludes with a very useful discussion of the major themes and theology of the book (pp. 387-401).

Like the other ZECNT volumes, Schreiner’s work is profoundly concerned with grammatical structure. The structure of each passage is meticulously analyzed. For casual readers, this feature may be cumbersome, but it will no doubt be appreciated by expository preachers using the commentary to proceed through the book of Galatians. Schreiner’s structural analyses serve to connect verse to verse and section to section, giving the reader a better sense of the overall flow of Paul’s argument in the book. Unfortunately, the blocks featuring the translation and grammatical analysis are, in a few sections, placed by the editors on their own page in landscape orientation, so that one has to turn the book sideways to read it.

Galatians demonstrates both accessibility and a high level of scholarship. Throughout the text, Schreiner offers clear and concise explanations, focusing primarily on the major issues of interpretation. He does not get bogged down in esoteric or arcane scholarly debates, but keeps the pace moving as he proceeds through the book. Each of Schreiner’s sections is also heavily footnoted, indicative of his interaction with numerous other commentaries, books, and articles on the subject. He also includes “In-Depth” analyses, at certain points in the commentary, to further explain interesting or controversial issues such as “Eating with Gentiles” (pp. 141-42), “The Meaning of Justification in Paul” (pp. 155-57), “The Meaning of ‘Works of the Law’” (pp. 157-61), and “What does Paul Mean by the ‘Faith of Jesus Christ’?” (pp. 163-66).

Schreiner uses these “In-Depth” sections to discuss the major exegetical issues surrounding Galatians. In his preface, he makes it clear that he thinks Luther and Calvin basically read Galatians correctly, especially on the issue of justification. On the issue of the “faith(fulness) of Christ” versus “faith in Christ” in Galatians 2:16, he opts for the objective genitive interpretation after listing arguments for both sides. He interacts with James Dunn, E.P. Sanders and other proponents of the “New Perspective” in discussing the meaning of the Pauline phrase “works of the law.” Schreiner’s conclusion is more conservative; he argues that the phrase refers to the entire law. Addressing other hot-button issues surrounding Galatians, Schreiner argues that Paul’s opponents in Galatia were professing Christians, that anti-imperial critique is not part of Paul’s agenda in the letter, and that the phrase “the Israel of God” in 6:18 refers to the church.

As one would expect of a scholar hailing from SBTS, Schreiner’s perspective is decidedly evangelical and Calvinist. He also takes the traditional, conservative stances concerning many introductory issues. For example, Schreiner prefers the South Galatian hypothesis and a date around AD 48, while acknowledging that the date and identity of the recipients do not necessarily affect the interpretation of the book (pp. 29-31).  He also harmonizes the Acts chronology with Galatians, favoring a position which equates Galatians 2:1-10 with Acts 11:27-30/12:25. His reformed theology is evident, especially in his application sections. He brings reformed doctrines such as election and perseverance into his applications, at times when they are appropriate to discuss in light of the text (pp. 318-20) and at times when they feel forced (p. 280).

By way of criticism, Schreiner’s arguments appear rigid and dogmatic at times. For example, he interacts with the “New Perspective on Paul” at several key points in the book. However, he does not seem to be able to learn from Dunn, Sanders, and others, as if there were nothing positive to be gleaned from their work. In his discussion on “works of the law,” Schreiner lays out the New Perspective case for understanding these as boundary markers and then rejects this understanding. He begrudging acknowledges, in a footnote, that the boundary markers of circumcision and food were the presenting issue in Galatia (p. 161). Some of Schreiner’s “Theology in Application” portions suffer from his dogmatism as well. For example, in the first section alone, he manages to take shots at charismatic Christians, open theists, and the emerging church movement (pp. 79-88). That said, his applications are often current, relevant, and always reflect sound evangelical theology.

Despite the above criticisms, Schreiner’s Galatians would be an excellent addition to the library of any preaching pastor, Bible teacher, seminary student, or interested layperson. I would especially recommend this commentary to any pastor wishing to preacher through the Epistle to the Galatians in their church, though those sharing Schreiner’s reformed theology will appreciate it most. In the preface to the commentary, Schreiner states that he has endeavored to write the book in such a way as to be helpful “to the busy pastor or layperson” (p. 13). This he has done. Schreiner has produced a work that can be appreciated by a broad audience. I have no doubt that we will continue to see this level of work from Thomas Schreiner for years to come.