Gender Roles and the People of God; and Paul and Gender 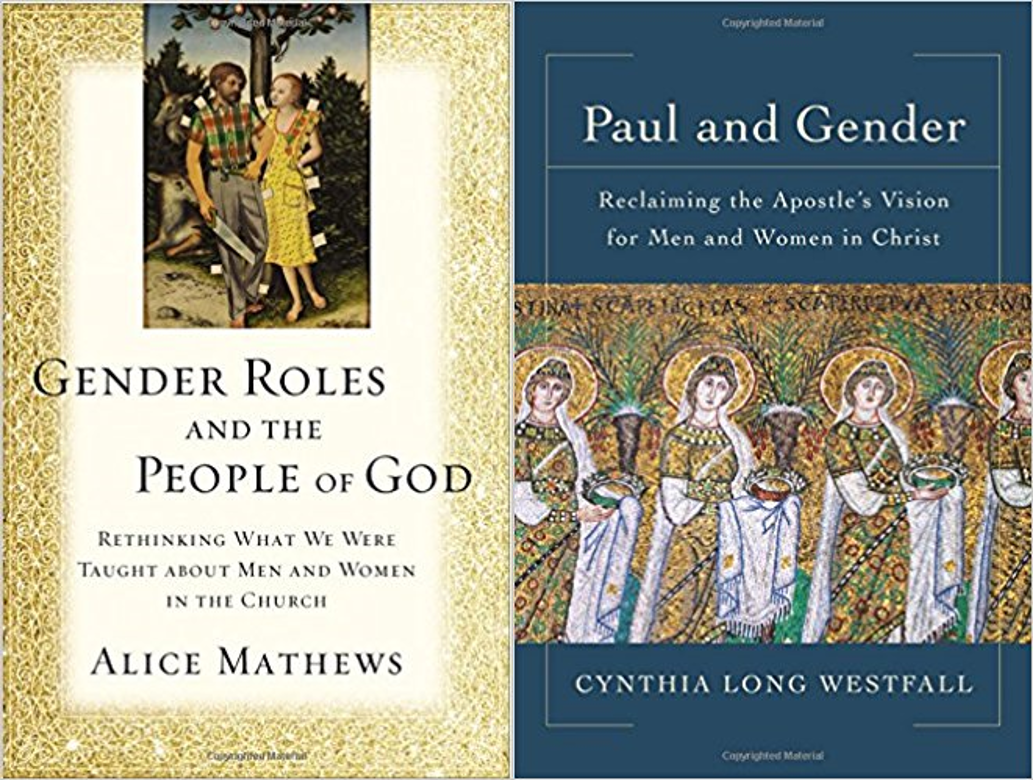 These two very different books have a similar goal: to counter the patriarchal views that have been dominant in the church and home over the centuries. Make no mistake, they both insist, the so-called “complementarian” option so prevalent among Evangelicals today masks its true ideology: hierarchy and patriarchy. To say women complement men in their different roles while insisting that women cannot be the senior pastors of churches, is to say there is a hierarchy in the church no matter how much you sugarcoat the term complementarian. The same holds for “mutual submission” in a marriage. Instead, these authors defend the “egalitarian” view: women and men are equal in the church, home, and society. They argue that this is the biblical view (Westfall limiting her consideration to Paul’s writings). To achieve this goal both authors take decidedly different approaches.

Dr. Mathews, now retired, is the Lois W. Bennett Distinguished Professor Emerita and former academic dean at Gordon-Conwell Theological Seminary, as well as former academic dean of Christian University GlobalNet. Dr. Westfall is associate professor of New Testament at McMaster Divinity College. Both women have authored other books and served in a variety of ministry capacities. And in the interests of full disclosure, Dr. Mathews formerly worked and taught at Denver Seminary, and Dr. Westfall obtained several masters degrees at that same institution.

Mathews’ book had its genesis in classroom lectures for a course she taught over many years on “Woman and Church Leadership.” The book is a reworking and expansion of those materials. In chapter 1 she uses the issue of slavery, and the church’s spirited defense of it in the past, to point out how crucial is one’s hermeneutics. She comes to insist on several key points: context must control interpretation; we must listen to the full testimony of Scripture; and texts should be allowed to disclose their main emphasis, not minor or tangential points. Likewise, we must carefully distinguish between descriptive texts (which describe what happened) versus prescriptive texts (that prescribe what should be normative).

The remainder of the book consists of three parts. Part 1 traces women in the biblical narratives that stand out against the grain in their patriarchal cultures. They didn’t abide by cultural norms of their day, yet they were commended by God for the roles they play. She points out that the Hebrew word ezer (helper; e.g., Gen 2:18) does not imply subordination but equality. In part 2 Mathews addresses key New Testament (NT) texts that complementarians typically employ to defend their position: 1 Timothy 2:12 and 1 Corinthians 14:34-35. She addresses the important word “head” (Greek kephalÄ“) as it occurs in 1 Corinthians 11:3-12 and ends chapter 7 with “The Bible’s Case for Mutual Authority in Marriage.” Chapter 8 considers the theological problem of whether Jesus is eternally subordinate to the Father; and chapter 9 is entitled, “Women, Leadership, and the Nature of Ministry.”

Part 3 consists of Mathews’ historical survey, tracing how patriarchy arose and was perpetuated throughout the centuries. The book ends with the question, “Where are We Today?” with the plea to abandon patriarchy and embrace the full equality of women and men in the church and home (as it is now almost universally embraced in western culture though not necessarily practiced there either).

This is no scholarly book; it will appeal to popular audiences who did not know that there is a robust biblical and historical case to be made for an alternative to complementarianism. The oft-cited opponents of Mathews’ views are found in J. Piper and W. Grudem, eds. Recovering Biblical Manhood and Womanhood, 2nd ed. (Wheaton, IL: Crossway, 2006). Mathews does well what she intends to do—to demonstrate that egalitarianism is also “biblical.”  While the book employs footnotes, they are often older sources (belying the long years in the course notes’ gestation?) and generally also popular (as opposed to scholarly) works. Those who have followed these heated debates over the last several decades will not be surprised by the usual opponents and proponents that Mathews cites. She goes over usual and well-trod terrain. Yet the overall effect is quite marked. She shows how easy it is to understand how a male-dominated system might develop and be defended, even by well-intentioned and Bible-believing Christians. But she shows how the systemic domination of women has harmed the witness and strength of the church. It’s time for egalitarianism to flourish and become the order of the day. She ends with a quite dramatic statement: “If gender-based hierarchy is allowed to continue destroying lives and disrupting God’s work of redeeming a broken world, it plays into Satan’s hand” (p. 237).

On the other hand, Dr. Westfall’s book does rank as scholarly. The arguments are grounded in the best and recent sources, as the ample technical footnotes demonstrate. She employs her considerable exegetical skills to correct what she claims are distortions of Paul’s views about women. Rather than traversing familiar terrain, Westfall plows new ground. Her stated reasons for writing the book include her claim that she brings to this discussion a new set of perspectives and methodological lenses—including modern linguistic theories and methods. Like Mathews, Westfall seeks to show that one can hold a high view of Scripture’s authority (neither women espouse secular feminism) and see that Paul does not support the typical conservative positions on women’s issues. She believes that traditional interpretations have misread the contexts in which Paul writes and Paul’s biblical theology as a whole. She proposes a linguistically-informed understanding of Hellenistic Greek and a rethinking of the social world of Greco-Roman culture. Here is Westfall’s thesis: “This study suggests that traditional readings confuse Paul’s theology with his missional adaptation to the cultural gender practices; those strategies allowed the church to reach the Greco-Roman culture and to survive within that culture and even to thrive” (p. 3).

How does the book proceed? In chapter 1 she addresses the cultural milieu in which Paul wrote his letters, investigating Paul’s Jewishness, his relationship to his Greco-Roman world, his use of rhetorical strategies, and Greco-Roman values concerning gender—both public and private spheres. She ends the chapter with her first take on the head-covering issue in 1 Corinthians 11 (she will return to this issue in various other places, a practice—spiraling back—that she employs with other texts to reinforce her growing case). Chapter 2 engages the issue of stereotypes, the uses of male and female metaphors to apply to believers. Chapter 3 involves the crucial issues surrounding the creation narratives in Genesis that Paul appeals to in various places. She addresses such topics as the image of God, the glory of God and man, purposes for the genders in Genesis, gender and the order of creation, headship, and woman created for man.

In Chapter 4 Westfall discusses the fall: deception, the origin of sin and death, and woman saved through childbirth. Chapter 5 is entitled “Eschatology,” a far-ranging one that seeks to show how eschatology plays a crucial role in understanding Paul’s theology of gender. She asserts, “Understanding gender in the light of eschatological ethics necessitates certain important relevant adjustments to traditional theology” (p. 157). She goes on: “On the one hand, it provides a serious warning against male ambition, competition, and entitlement. On the other hand, it reframes the traditional understanding of women’s responsibilities in the eschatological community of God” (ibid.). Repeatedly she shows how Paul’s “restrictions” on women are missional accommodations, not prescriptive regulations about their roles in the eschatological community of the church. This is “already, but not yet” territory. She treats Galatians 3:28 in this context. Chapter 6 considers “The Body” particularly as it relates to male and female bodies—what Westfall considers one of the most misunderstood parts of Paul’s theology. She includes discussions of “flesh,” sexuality, marriage and singleness, children, separation, divorce, and remarriage, and immorality.

Westfall’s chapter 8 addresses the topic of “calling” and gender. What about the call to service and the priesthood of all believers? Does marriage impinge on calling? Should women serve or be silent? And what about “authority,” the issue in chapter 9? She returns to a consideration of the Greco-Roman culture and the nature of authority and status. She addresses Paul’s theology of authority, power, and status as well as both men and women as they relate to authority.

The final chapter 9 returns to a full-fledged analysis of 1 Timothy 2:11-16—and the larger argument of the entire epistle—though she has considered these verses multiple times throughout the book as they impinge on other issues. She argues against typical views when she says, quite convincingly, that 1 Timothy 2 should not be viewed as Paul’s instructions for conducting worship services simply because prayer is mentioned at the outset or that men are to raise holy hands. Rather, she alleges, Paul’s instructions to Timothy in these verses are part of the larger burden of the letter—to counter the false teaching in the church. How women dress or how men pray are universal instructions, not merely for worship services! She says, “… the choice or assumption of a church service as the frame for 2:1-15 contributes to incoherence and a lack of cohesion rather than providing a context that explains the difficult features of the passage” (p. 289). Once that unlikely alleged context is stripped away, she concludes, we see how what Paul says about “restricting” women in 1 Timothy 2 fits the larger point of the letter. Both men and women have fallen prey, in different ways, to the errors of the false teachers, and both Paul’s proscriptions and instructions must be viewed in that larger context. Thus, Paul’s prohibitions against women are descriptive (how to deal with the problem in Ephesus), not prescriptive for wives or women in church services (or marriages) for all time.

She ends the book by saying, “The conclusion of this study is to call for a thorough rereading of the Pauline passages on gender” (p.313), quite an ambitious invitation. But this has been an ambitious study that should challenge all fair-minded readers to see for themselves whether she has made her case—in some or most, if not all, her arguments. The strength of the book is its compilation of approaches; she brings to bear her analyses of sociohistorical contexts, semantic and linguistic textual features, and literary and discourse analyses. The cumulative weight of these various lines of argumentation constitutes an impressive case that will not be easily dismissed by conscientious readers—lay or scholarly alike. And to top it all, Westfall writes in a winsome and irenic way that humbly invites readers to engage what she says for the sake of the gospel and the mission of God in the world.