Georgia Oâ€™Keeffe and the Camera 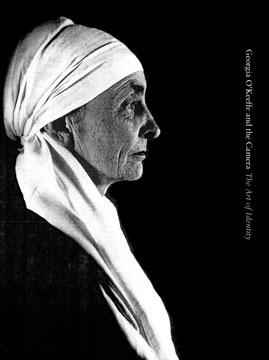 If one collects books of Georgia O’Keeffe’s (1887-1986) paintings and eccentric life and books about her pioneering photographer husband, Alfred Steiglitz, one may well go broke. O’Keeffe was, to my mind, the great female painter of the twentieth century, and both an iconic and iconoclastic personality in her own right. Her productivity and range of expression were immense, as she balanced abstraction with representation and continued to develop throughout her career. (Stasis is a sign of death in all art.) Her use of color was unsurpassed, and her style instantly recognizable to those who have studied her work even for a short time. While she is most known for her flower paintings, earlier in her career, she also depicted the New York skyline and, later, lovingly painted the haunting landscapes of New Mexico, where she eventually settled and died (see Barbara Buhler Lynes, Georgia O’Keeffe and New Mexico: A Sense of Place [Princeton University Press, 2004]). She also painted moving and mesmerizing abstractions, rich in color and curves. In fact, a whole book is dedicated to her use of circles in abstraction. See Jonathan Stuhlman, Georgia O’Keeffe: Circling Around Abstraction (Hudson Hills, 2007). She seldom painted the human figure, however.

The material on O’Keeffe and her associates is vast and seemingly inexhaustible.  It seems that no angle has been left unexplored or unexposed. There are biographies of O’Keeffe; books about her tortuous relationship with Steiglitz; many books of her paintings, of course; books that focus on some particular aspect of her life, such as her short, but productive, time painting in Hawaii (Patricia Jennings, Georgia O’Keefe’s Hawaii [Koa Books, 2011]); books about her two austerely beautiful homes in New Mexico, where she spent her later years mostly painting the landscape: and even books about her personal cookbook. It seems that just about anyone who spent significant time with Miss O’Keeffe, including her geriatric nurses, has written about their brush with artistic renown.

O’Keefe and the Camera, however, stakes out new ground, and does so in an erudite, readable, and visually captivating manner, beginning with the cover itself. We find a black-and-white profile of O’Keeffe from 1948, looking forward before a perfectly black background, her head covered with a single scarf, with her chiseled and now-lined features on fine display. Unlike so many today, O’Keefe could pose without preening. These photographs of her were steeped in artistic purpose, unlike nearly all photographs today, given the digital revolution’s overexposure to everything. The ubiquity of the post-modern camera—usually in a phone—unleashed a pandemic of ad hoc mediocrity (at best).

O’Keeffe and the Camera is graced with a fine introduction by Barbara Buhler Lynes, who curated the original exhibit, and a longer explanatory and very well documented essay by Susan Danly, which pays close and loving attention to O’Keeffe’s complex and fascinating relationship to the camera. These features fit perfectly with the art and photography that make up the majority of the book. (The book wisely omits the early nude photographs of O’Keeffe taken by the shameless Steiglitz.)

It is well known that O’Keeffe was closely associated with photography throughout her life, which, in the early stages of her career, was not enshrined as a canonical art form. It was still reckoned more as a technological novelty, and certainly not on a par with painting or sculpture in the visual arts. But Steiglitz was instrumental in changing this, both through his own photography and his management and curation roles of an avant-garde art studio in New York City, called 291 (named after its address), and of later studios. Studio 291 was the site of O’Keefe’s first major showings, the first of her charcoal sketches. Steiglitz also took photographs of the young and mysteriously alluring O’Keefe, some of them in the nude. He displayed these at 291, to the surprise and rightful dismay of not a few art critics. He continued to photograph O’Keefe (with whom he had an adulterous affair and later married). Thus, O’Keeffe was, strangely, both coming of age as an artist and as a model of sorts. Steiglitz photographed her for decades, but he was not alone. Many were entranced not only by her paintings, but her persona and her visage. Unlike many painters, her image became as well-known as her paintings. This was true throughout her storied career.

This is what Georgia O’Keeffe and the Camera explores: the relationship of her art and life to photography. While O’Keeffe’s artwork along was enthralling to millions, she carefully cultivated her photographic image as well. Steiglitz first interpreted her as a mysterious feminine force, and saw her earlier painting through a Freudian lens, particularly the flower paintings, which seem to resemble male and female genitalia. (It could be, of course, that this resemblance is found in creation itself.) Freud was the rage among intellectuals at this time, but O’Keeffe herself, while allowing herself to be photographed erotically as young woman, firmly denied any sexual representation in her paintings or sketches. It seems, on general principles (and on the poverty of Freudianism), that we should trust the artist over the likely opportunistic impresario.

O’Keeffe’s own face was an instantly recognizable work of art, at every stage of her long life. Unadorned by make up or well-coiffed hair, Miss O’Keeffe (as she insisted on being called, despite being married), dressed simply, and often in black, drew attention to herself through her appearance as well as her art. Her painting was influenced to some extent by the photo-succession movement, of which her husband was a part, but her career was furthered by her respect for the camera. As such, she befriended photographers such as Ansel Adams and, through generally reclusive in her later years in New Mexico, allowed well-known photographers to use her and her homes as their subjects. Some of these photographs appeared in the most popular magazines of the day, such as Life Magazine. A wonderful collection of fine photographs of her and her homes, along with some of her paintings, is found in John Loengard, Georgia O’Keeffe : Image and Imagination (Chronicle Books, 2006). This is the photographer who shot the piece for Life Magazine.

Her two homes were restored adobe buildings, constituted by classic southwest architecture. However, she contrasted this ancient aesthetic with modernist furniture and bejeweled it with her art and her collection of bones and stones from the surrounding desert.  She wanted to make her life and art one, and seems to have succeeded, given her standards.

To sum up the thesis of this book, I can do no better than to quote Danly’s final paragraph of her introduction:

For the most part…O’Keeffe’s lasting fame rest on strength of her work and the romantic story of her life. Photographs made her art dealer husband, her friends, celebrity portraitists, and photo-journalists all tell various versions of that tale. By consciously cultivating press coverage of her career and her life, O’Keeffe achieved and maintained a celebrity status for decades, not only in the art world, but also in the population at large. O’Keeffe’s astute understanding of the power of photographic image became a critical tool in fashioning her popular identity and a key to her abiding fame (36).

But this was not postmodern celebrity, where people are often well known for being well known, despite their paucity of achievement in any direction. O’Keeffe’s “fame” (although the word does not quite fit) emanated from the person herself, it seems, not from a media-constructed persona.

It is distressing that some Christians (and others) have dismissed Miss O’Keeffe on moral grounds as a sexual oddity. She is now probably better known for her unique flower paintings (and their possible erotic associations) than for her other art, which tends to lack the anatomical insinuations. At every stage of her long career, she shaped an innovative style based on careful observation of her objects and of herself. She lived an unconventional (and even immoral, at times) life of aesthetic intensity and immersion. She knew beauty and uniquely honored it as such. She was entirely distinctive in look, manner, and influence. In other words, she was an exceptional artist, though neither a saint nor even a confessing Christian. Since God is the giver of every good and perfect gift, any aesthetic or personal excellence we find in Georgia O’Keefe must ultimately be credited to Him.

Although not mentioned in this book, when asked why she so often painted Mount Pedernal, an arresting flattop mountain near her home, O’Keeffe replied, “If I paint it enough times, God may give it to me.” There is, in that cryptic or gnomic utterance, a sense of gratitude, grit, and determination—all admirable qualities, for painters, plumbers, postmen, or philosophers. One finds in her paintings and in the many photographs of her life the mark of aesthetic human excellence, however marred by fallen mortality.