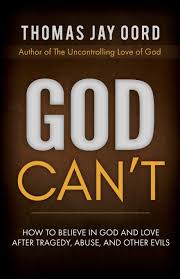 In his book, God Can’t, Thomas Jay Oord continues his search for a clear praxis (how we ought to live) regarding open theism. This book argues that God’s love supersedes God’s omnipotence, of which he previously wrote in The Uncontrolling Love of God. He sets out to find answers for common human events such as suicide, mass shootings, sicknesses, and natural disasters. Within a conventional view of God’s sovereignty, Oord notes that blame is often placed on the freedom of the wrongdoers to choose. However, Oord notes that “a God who could singly stop rape, murder, and torture is blameworthy for failing to do so” (p. 148). In this book, Oord sets out to answer the question, “How can a good God allow bad things to happen to good people?” with the contents of the book as a response stating, “God cannot prevent evil singlehandedly.” The order of Oord’s arguments are as follows: God cannot prevent evil (described as essential kenosis), God feels our pain, God works to heal, God squeezes good from bad, God needs our cooperation.

Oord has created a series of polemics against the conventional view of God’s sovereignty to prevent evil. The position that God allows evil, Oord combats with “Perfect love prevents preventable evil” (p. 18). The second position where the “God allows evil” argument can go is that it can remove the distinction between genuine evil and permissive evil (p.13). The book turns from this section into a full-fledged discussion of a term that Oord coins called essential kenosis regarding God’s love: “Essential kenosis says God cannot withdraw, override, or fail to provide freedom, agency, and existence to creation. God’s love always empowers, never overpowers, and is inherently controlling (p.28). Oord coined essential kenosis building off of the philosophical term “essential” regarding the essence of God and the word kenosis or “emptying” from Philippians 2:7, but relating the idea of kenosis to God the Father’s characteristics rather than to Christ. Oord highlights essentialism from a philosophical standpoint regarding God’s character, that it is not changing and is not dependent on the individual to create meaning, such as found in existentialism. Rather, Oord uses scriptural references to highlight the inhibiting of God’s controlling will to spotlight God’s uncontrolling love. It is from this starting point of reviewing his previous book that Oord finishes out his other four chapters, one argument per chapter, highlighting the discussion of God being present in our pain, working to heal us, squeezing good from bad, and cooperating with us.

In the final chapter of the book, Oord moves to the uncomfortable topic of a sort of quasi-universalist hamartiology regarding God’s continued actions and human response in the afterlife. The author rejects the position of retributive only justice by God in the afterlife where humanity gets what one deserves for the actions done in this life. Instead, the author accepts a restorative style justice of God where God seeks to bring all of His creation once again under glorification. This post-mortem glorification does not allow for annihilationism nor for eternal punishment which somehow supersedes God’s desire that all come to God in love and that God may respond lovingly. In a move made for a different reason than Love Wins by Rob Bell, the conclusion made by Oord is that for God’s love to be relentless, all people must cooperate with Him in the afterlife (p.164) coming to a knowledge of God and subsequent change of afterlife location. This essential kenosis position and its subsidiary beliefs regarding humanity and hell, Oord claims, cost him his tenured job at a Christian university (p. 173).

When I initially finished this book, I was mesmerized by the message of hope in healing from tragedy behind the written words. I realized the usefulness of open theology to address many of the concerns of my fellow millennials and their struggles with agnosticism or atheism.  My own prayers began to change from “God please keep this evil from happening” to “God may I be aware and act during the evil to offer peace and soothe wounds.” Yet it is very difficult to reorient prayers when one has prayed for God to act single-handedly for so long. I will provide a brief critique of my hesitancy toward adopting full open theism or essential kenosis below, but allow me to continue with some highlights this book provided to me.

In his book, Dr. Oord discusses the 2017 movie The Shack. I appreciated viewing the film The Shack because the portrayal of God is so radically different from the angry, vengeful God or the distant, unconcerned Deity from many western traditions. I also am grateful for the critique that Oord gives regarding the pivotal moment in the movie where God breaks through the barriers in Mack’s understanding of God’s love (p.40-1). Oord wished for one minor change to have been made which would have allowed a major theological shift in the film toward the type of open theism employed by Oord. In order for God to unconditionally and uncontrollingly love, God must have been unable to single-handedly prevent the kidnapping of Mack’s daughter. According to open theology, God couldn’t have stopped the kidnapper and couldn’t have coerced Mack to come to the Shack location.

From the beginning of the book to the postscript, this book is a goldmine for counselors and pastors at providing hope for survivors of tragedy, abuse, and natural evil. It does require a complete overhaul of one’s thoughts regarding God’s sovereignty and how one actively pursues a changed prayer life. Regarding the topic of benevolence, it seeks to affirm God’s goodness toward his created beings. Regarding sovereignty, it seeks to affirm God’s potential to act but eliminates the need for Him to act without human cooperation. If the Trinity is cooperational in its creative abilities (Genesis 1:1-2, Colossians 1:14), then it would follow that the same Trinitarian God would want to act in cooperation to bring about any volition on God’s part in this world.

Open theism is not a recent movement within Christianity. Within Evangelicalism, it is a recent hot topic. Richard Rice’s 1980 The Openness of God contemporized the discussion and the follow-up essays in 1994 created the opportunity for pushback from mainstream evangelicalism. Rice has recently published in April 2020 The Future of Open Theism: From Antecedents to Opportunities. Since the 1980’s publishing of Rice’s book, several denominations and universities clearly stated their disapproval of open theism. And while the subject of open theism is appealing for how it innovatively separates God from natural evil or human evil, it has several more hermeneutical steps before it can successfully stand up on metaphorical legs. I affirm the quality of conversation that this book allows. Oord has since written God Can’t, Q&A in July of 2020 to continue the conversation and address specific questions readers have had about his book. The author already gives discussion questions at the end of every chapter of God Can’t to encourage conversation. However, I think there are a few answers still to be worked out with open theism including the process behind Oord’s use of using specific philosophical methods to reach his conclusions. I commend the use of classical apologetics by emphasizing the rationality of God and vis a vis humanity. I would be interested to see his thought process on his selected scripture verses because he does not seem to address various passages regarding God’s supreme control (Psalm 135:6, Proverbs 16:9, 33, Isaiah 46:10, Romans 8:29, James 4:15) which somehow works in conjunction with our own volition (Genesis 3:17, Proverbs 1:24, 3:31, Acts 1:21-26’s use of choosing lots). These verses on God’s supremacy seem to indicate God’s volition supersedes certain emotions, while the verses on human desires can sometimes impact and even direct God’s own decision making process. I laud Oord for his discussion-promoting book and wish for further elaboration and explanation on essential kenosis in Oord’s future publications.