God’s Kingdom on Earth and in Heaven 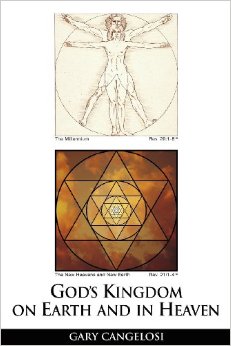 Premillenial, amillennial, and postmillennial eschatologies have been the three competing interpretations of biblical teaching about the events just before, during, and after Christ’s return for most of the history of the church.  Is one clearly right and are the other two wrong?  If so, why have so many good and godly interpreters of Scripture disagreed?  Does Scripture simply not give us enough information to decide for sure? This could quite likely be the case, despite the overconfidence of some.  Or is there some combination of two or three of the perspectives that has yet to be explored in depth and that might advance the discussion?  Gary Cangelosi, who has studied at both Gordon-Conwell and Reformed Theological Seminaries, thinks so and dubs the perspective postrestorationist.

A key strength of postmillennialism is that it solves the problem of having unbelievers in natural bodies living with believers in glorified bodies during the millennium, as premillennialists envisage.  The millennium in postmillennial thinking is the last, long period of human (and church) history before Christ returns in which God through his people creates millennial conditions on earth.  But believers and unbelievers alike remain in their natural bodies.

Amillennialism avoids this problem, too, but by making the millennium equivalent to the church age.  Both amillennialism and postmillennialism likewise recognize that nothing in Revelation 20, or elsewhere, requires Christ to be ruling from earth during the millennium; he may well rule from heaven, still seated at the right hand of the Father.  But they have to ignore the tight literary connection between the end of Revelation 19 and the beginning of chapter 20, which together delineate the fate of each of the three members of the Satanic parody of the Trinity—Satan, the Antichrist and the false prophet—and to see chapter 20 as a flashback to a time well before Christ’s return.

Premillennialism can respond to the first problem by pointing to the resurrection of Jesus (and a few other OT saints) appearing on earth among people with natural bodies as a precedent to the mingling of the two, but it was only a few people and very temporary.  A handful of premillennialists deal with this by postulating that only believers (perhaps only martyrs) live through the millennium, but this ignores the fact that only the world’s armies are destroyed at the end of Revelation 19 and not all people and that the most natural punctuation of 20:4 separates martyrs from everyone else who has not worshipped the beast.  Plus the better known dispensationalist branch of premillennialism (unlike historic or classic premillennialism) posits a pretribulational rapture that founders on numerous exegetical counts.

What, then, if we go back to the early Church Fathers who were premillennial?  It is well known that Second Temple Jewish views of resurrection bodies often differed little from the reanimations of corpses.  Several Patristic testimonies can be read as affirming millennial bodies for saints that likewise seem equivalent to our present bodies only without the sin that besets us (and them) in the present age.  They conceived of people continuing to eat, drink, marry, and have children, and at least the latter seem precluded from the eternal state by Jesus’ teaching to the Sadducees on the nature of resurrection life.

Maybe the solution to our first problem, then, is to adopt a historic premillennial chronology for Revelation 19-20 but observe that Christ does not explicitly return to earth even at the end of chapter 19.  Perhaps he reigns from heaven throughout the millennium over believers who have significantly improved but still not entirely glorified bodies.  The second coming would then occur at the end of Revelation 20, in accompaniment with the White Throne Judgment.  The problem that amillennialist and postmillennialist interpreters have with two separate times for judgment as in traditional premillennialism is solved as well.  But instead of “moving” the end of Revelation 20 earlier in time to coincide with the end of chapter 19, which is then equated with the other Scriptural passages about final judgment (as in amillennialist and premillennialist views), the other passages about final judgment are “moved” later in time to coincide with the end of Revelation 20, after a reasonably “literal” millennium.  Given that most adherents of all views acknowledge that no passage of Scripture unambiguously correlates the timing of the millennium with the timing of final judgment and, indeed, that no other passage unambiguously teaches about a millennium outside of Revelation 20 itself, this option, however unconventional, cannot be said to necessarily contradict any other biblical texts. And there are Patristic hints of this perspective also.

Interspersed among these main points are other related but less crucial discussions that can at times distract from those points.  The longest of these is a detailed chapter on Daniel and the Olivet Discourse.  A much more helpful “tangent” deals with options in church-state relations.  Like the Anabaptists at the time of the Reformation, the logical outgrowth of postrestorationism is to keep church and state clearly separate, with Christian activity centered on the church, not on Christianizing governments.  Only in the millennium will the latter obtain.  Similarly, Israel and the church are kept separate, with promises of an earthly kingdom fulfilled only in the millennium.  Even then, Jewish believers will rule over Israel and Gentile believers over the rest of the nations.  Only in the eternal state are ethnic distinctions entirely insignificant.

Ken Barker, OT scholar and longtime general editor of the NIV, writes in a back-cover blurb that Cangelosi’s study represents a view well worth considering and I agree.  I do not have to be convinced by all the details to hope that a major publisher will be open to publishing Cangelosi’s perspectives in one form or another.  If his is not the last word on the topic, perhaps it will provoke others to be equally creative, adopting some of his proposals, some of the traditional strengths of the various conventional views and an even more convincing new twist of one or more of them.