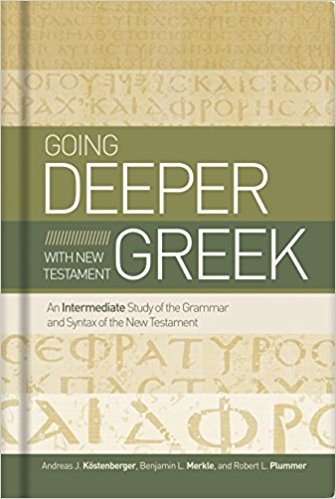 There has not been a significant intermediate-level grammar produced by a major publisher since the 1990’s. Important grammars by Stanley E. Porter (1992), Daniel B. Wallace (1996), Richard Young (1994), and David A. Black (1998) emerged during this decade. However, there have been numerous advances in the study of and our knowledge of the grammar of the Greek of the NT, and important advances in linguistics in the last several years, that make the time ripe for a new intermediate level grammar that brings grammatical discussion up-to-date in light of the some of the recent trends, such as verbal aspect, the case system, voice and so-called deponency, and discourse analysis. Going Deeper with New Testament Greek promises to offer a fresh approach to teaching Greek that grows out of the teaching experience of three professors, Andreas J. Köstenberger, Benhamin L. Merkel, and Robert L. Plummer, all who teach at major Southern Baptist seminaries. This book is more than just a grammar; it covers a range of topics which makes it suitable for textbook use in an intermediate (2nd year) Greek grammar or exegesis course. The book begins with a brief chapter that surveys the history of the Greek language and textual criticism. The authors opt for an eclectic method, and provide a helpful chart which catalogs the internal and external principles of textual criticism. The “grammar proper” appears in Chaps. 2-12, and covers the standard grammatical categories that one would expect to find in an intermediate grammar of this length. The discussions are clearly presented and illustrated from a variety of texts from the New Testament. The book ends with a chapter on doing Word Studies, and a concluding chapter on helpful suggestions for continuing one’s study and use of Greek. Rather than making detailed comments on specific discussions of grammatical categories or treatment of specific texts (though this author did not always find himself in agreement with every discussion of NT texts and the application of grammatical categories), it might be more useful to make a number of observations on the grammar as a whole in terms of its usefulness as a textbook and in terms of its treatment of Greek grammar.

First, there are numerous features in the book that make it a valuable textbook for teaching and learning intermediate Greek grammar. As noted above, each chapter has very clear and engaging discussions of the various grammatical categories. Furthermore, each chapter includes helpful charts that visually present the grammatical categories and functions being discussed. These will be extremely useful for quick review of the categories and labels presented in each chapter. It also makes the book visually attractive. Moreover, each chapter ends with a vocabulary list (including the number of times each word occurs in the Greek NT) that will aid in reviewing vocabulary already learned in 1st year Greek but also in acquiring new vocabulary. Each chapter also ends with a lengthy NT text and detailed Reading Notes (grammatical notes). The breadth of topics, which includes textual criticism and word studies, makes it suitable for an exegesis course. The grammar also shows awareness of recent research and development on a number of grammatical issues, such as verbal aspect, so-called deponency, and discourse analysis.

However, a number of shortcomings could be noted. First, the textbook by Köstenberger, Merkel, and Plummer does not sufficiently implement insight from recent linguistic research on the Greek of the NT. Particularly, insight from verbal aspect are not always implemented consistently throughout the grammar. Furthermore, most of the grammatical categories and their labels are the labels found in older grammars. Going Deeper uses them uncritically, even though many of them have been shown to be invalid or unnecessary. There is only really one chapter devoted to grammatical units larger than the word or clause level: the last chapter on discourse analysis. However, this chapter ends up being a hodge-podge of methods and insights, including sentence diagramming (which is more suitable for English rather than Greek).

Nevertheless, the layout of the book and the clear discussion and illustrations, along with the numerous charts and detailed exegetical discussions, make this a valuable book for teaching and studying NT Greek at the intermediate level, and certainly a more accessible volume than that of Daniel B. Wallace.