Hearing the Message of Daniel: Sustaining Faith in Today’s World 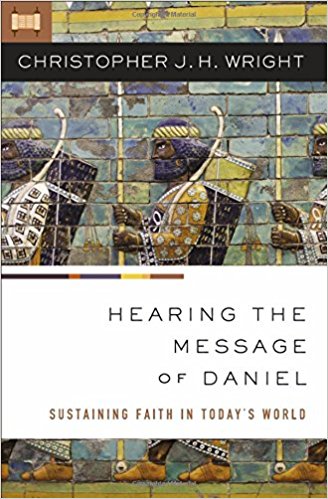 Old Testament scholar, writer and preacher Chris Wright has done it again!  Not content to rest on his outstanding corpus of innumerable articles and books, not the least of which is his magisterial The Mission of God, Wright now offers us a fine expository overview of the book of Daniel.  Served up with innumerable insights into both the text and the historical/cultural context of ancient Babylon, this volume illuminates the key themes, specific emphases, and overall theology of one of the most popular, and in some ways, enigmatic books of the Old Testament.  And Wright lays it all out in his customary clear prose that is frequently sparkled with the charm of his sharp Irish wit.

It needs to be noted at the outset that his book is not a commentary per se nor does it deal with the various and sundry critical issues surrounding the authorship, date and prophetic elements of the biblical text.  Rather it’s a book that explicates each section of Daniel and how each applies to God’s people living in a wide variety of cultural contexts in the early 21st century.  Wright based this work on a series of lectures and sermons he has done in the past on the first six chapters of Daniel and supplemented these with some new material on Daniel 7-12.  The result is a penetrating and helpful look into how God’s people sustained their faith in the face of enormous cultural pressures and vicious persecutions within the pagan empires of ancient Babylon and Persia. This makes it a valuable spiritual tool for all of us who may face something similar in our own contemporary situations.

While there are a number of features of Wright’s work that deserve to be highlighted, let me focus on three.  First, he wisely notes that Daniel and his three friends Shadrach, Meshach and Abednego (to use their Babylonian names) were all laymen serving as government bureaucrats in an ancient pagan empire.  Their faithful and effective service in Nebuchadnezzar’s vast, multi-cultural civilization carries a number of lessons for Christians currently serving in governments, businesses and educational institutions which are staunchly opposed to the values of God’s kingdom.  All too often we think we must impede these institutions or subtly undermine them in order to promote ‘justice.’  Wright’s take on the work of these four Hebrews in the Babylonian superstructure should give us pause to rethink our approach here.  Second, he points out that it was the combination of their spiritual discipline and work ethic that gave them a voice for God and His ways in that polytheistic Empire.  Wright points this out in his first four chapters that mirror those same chapters of Daniel, demonstrating that Christians can, more often than not, make the biggest impact by focusing first on their walk with Jesus and then on doing their jobs in an outstanding and excellent manner.  As Wright implies all along the way, there’s a lot of evangelistic sway that can be earned by keeping one’s commitment to Christ as the top priority and one’s mouth shut until the opportune moment arrives.  Third, when it comes to the prophetic sections of the book (chapters 7-12), Wright does a tremendous job of hitting the key themes of these texts without getting bogged down in numerology and mysterious sayings.  I especially appreciated how he wove together Daniel 10, 11 and 12 in order to make sense of the larger picture in view (i.e. the political maneuvering of the Ptolemeys and Seleucids resulting in the persecution of God’s people and culminating in the promise of resurrection and ultimate justice).  Given that entire books have been written on some of the prophetic texts in Daniel, Wright’s approach is, in my view, more reasoned, useful and probably far closer to the original author’s intent.

Given that this is a critical review, we must ask if there are any concerns with his book.  I have one larger one and then two smaller ones.  My main objection is the view Wright has on western civilization at large.  At various points throughout this book, the reader is given the impression that ‘we of the West’ are the modern equivalent of ancient Babylon and Persia in our materialism, consumerism and disregard for the environment.  Yes, we are affluent and consumeristic but so are China and India!  And our growing social concerns with the environment vastly outweigh those of much–if not most–of other modern societies.  Wright seems to slip all too easily into the guilt many white, western academics feel about the benefits their civilization has afforded them.  Given all that western society has contributed to world’s economic growth, democratic political development, and international peace over the last seventy years, I say let’s lose the guilt.  Overall, it’s undeserved and doesn’t push God’s agenda ahead in any productive way.

Given that, let me move onto the smaller critiques.  First, I was a bit disappointed in how he handled the famous prophecy of Daniel 9.  In my opinion, his emphasis was rightly on Daniel’s prayer of confession, contrition and repentance but Wright too easily dismissed the significance of Gabriel’s oracle to the prophet.  While I recognize that biblical prophecies have been and will continue to be misread, misunderstood and misinterpreted, I’ll go out on a limb and argue that this is a Messianic prophecy showing that God’s plan of redemption for the sin of people will be fulfilled in the “anointed one who will be put to death” (9:26).  I don’t think Dr. Wright would disagree but I think he might have spent a bit more time on this section of the text.  Second, while I thought his handling of Daniel 10 and 11 were historically solid, I do think he might have given more weight to the concept of prophetic foreshadowing that seems implicit in these passages.  Yes, the king of the north (11:15-28) is almost certainly the malevolent Antiochus Epiphanes IV who was the persecutor of Israel’s faithful remnant in the 2nd century B.C.  But I believe Antiochus also stands as a type of ‘anti-Christ,’ many of whom would follow in the centuries to come – and will continue to do so until the end this evil age.  Dr. Wright doesn’t really go there and, in all humility, I would like to ask him ‘why not’?  But these are very minor flaws and I sincerely believe that this book deserves to be on the shelves of biblical scholars, students of the Old Testament and especially pastors.  It’s the kind of book we need to draw on for hope and help in a rapidly changing and increasingly challenging global–and local–environment.