How Georgia Became Oâ€™Keeffe: Lessons on the Art of Living 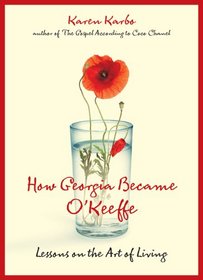 Popular books can lead their readers deeply astray, even if their subject matter is (or could be) profound. This is amply illustrated by this little, clever, but unwise book on painter Georgia O’Keeffe (1887-1986). It is clever because while biographies of O’Keeffe are copious and come in various sizes and style, no one, to my knowledge, has used her life explicitly as model for “the art of living.” Karen Karbo has taken aspects of the life of Georgia O’Keeffe to construct a kind of biographical self-help book, primarily written for contemporary women. (I read it out of my consuming interest in all facets of O’Keeffe’s life and art.) However, the author lacks much moral sense, and so leads her reader’s astray in various ways.

The book has no photographs of O’Keeffe’s vast and marvelous array of paintings and sketches. Neither is there a single photograph of the photogenic Miss O’Keeffe. There is next to no art criticism either. Rather, the entire book plunges into the O’Keeffe person history and personality. Although the author does not mention it, this endeavor is a vital part of the tradition of virtue ethics: find moral exemplars to emulate (as opposed to mastering a set of moral rules per se or seeking the greatest happiness for the greatest number). But one of the weaknesses of virtue ethics is that one may select the wrong people to imitate. (Friedrich Nietzsche admired the megalomaniacal Napoleon, for example—precisely for being power-mad.) Or one may imitate the wrong things in the right people. Miles Davis was a sublime trumpeter, composer, and bandleader, but led a raunchy life of drug abuse, wife- abuse, and more. Those who look to his music as exemplary jazz are wise. However, to think one must live a life like his is unwise. One must know how to tell the difference between the virtuous and the vicious.

Karbo’s breezy and breathless attempt to combine biography and self-help fails to make these discriminations. She is more interested in O’Keeffe’s fame than in the virtues and vices of her life. (This might be expected since the title of author’s previous book: The Gospel According to Coco Chanel. Life Lessons from the World’s Most Elegant Woman.) In her approach to O’Keeffe, Karbo is akin to pop artist Andy Warhol, who interviewed and depicted O’Keeffe when she was ninety-three-years old. Given the subjects of Warhol’s garish depictions of the famous (Marylyn Monroe, for example), and his own superficial-for-superficiality’s sake style, one cannot imagine that he would approach the grand lady of American painting in an appropriately reverent and respectful style. He was addicted to fame (his own) and the famous (his human subjects). The silkscreen he made of O’Keeffe was, in a word, hideous. The medium and the man behind the medium did not fit the content of O’Keeffe’s face or art or life.

The same can be said, mutatis mutandus, of How Georgia Became O’Keefe. The author appropriates O’Keefe, not so much as an artist, but as a celebrity example of proto-feminism, pluck, grit, doggedness, and unique charm. And there is some truth in all of this. Nevertheless, the book discloses a pervasive and pandemic problem: the unanchored adoration of celebrity. But O’Keefe was not a celebrity in modern terms. She had a strong—if sometimes allusive and abstruse—personality, which was nearly one with her art. Yes, she was concerned with how her public perceived her (as is wonderfully documented in Georgia O’Keeffe and the Camera [Princeton University Press, 2008]), but I wager that she would be less than flattered by Karbo’s mixture of hapless hagiography and existential inspiration. O’Keeffe could not be thus commodified.

Despite some of the lessons that Karbo draws in her ten short chapters from O’Keeffe’s life, the pervasive flaw is the author’s amoralism. Her attraction to O’Keeffe is to a strong woman, whatever moral standards (and not merely cultural ones) she may have broken or even flaunted. I will not submerge the reader with all the allegations of O’Keefe’s supposedly polymorphous sexuality, but it is known that she committed adultery with Alfred Steiglitz, her first promoter (a much older man), and posed nude for his photographs. When Steiglitz met an attractive woman, his modus operandi was to photograph them nude, then seduce them (if possible)—something he did after his marriage to O’Keeffe as well. One may dispute the legitimacy of “the nude” in art, but nudity in photography is quite different than nudity in painting or sculpture. A living person is exposing what should not be public, however magical that person’s naked body may be or have been. Some things are better left unknown and un-shown. Curiosity is often a vice (especially when coupled with the erotic) and reticence is often a virtue. (On this, see Rochelle Gerstein, The Repeal of Reticence: America’s Cultural and Legal Struggles Over Free Speech, Obscenity, Sexual Liberation, and Modern Art [Hill and Wang, 1999].)

How Georgia Became O’Keeffe traces the basic story and ideals of Georgia O’Keeffe’s incomparable life. In that sense, it is an acceptable primer. It even gives some good advice concerning retreating from technology for the sake of stimulating creativity (56-59). But as a guide to life or as an analysis of Georgia O’Keeffe it is a near-total failure. This miscarriage reveals several common vices of contemporary culture: idol worship, amorality, and ultimately flippancy. It is a book better left unread, despite the profundity of its topic.