How to Be an Existentialist: or How to Get Real, Get a Grip, and Stop Making Excuses 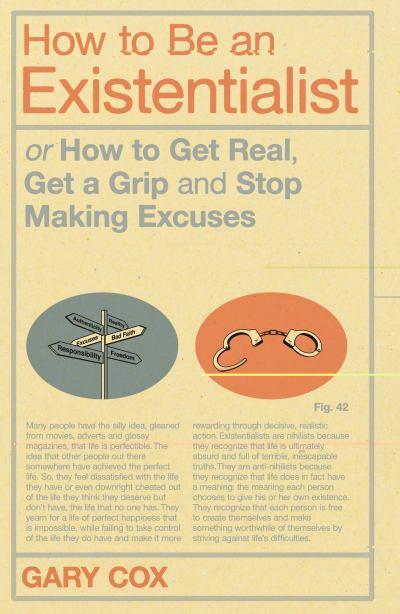 Existentialism, although not in its heyday, is not dead. It claims that God is dead and that man is alone, permanently alienated in an absurd universe. Recent books and articles seem to attempt to revive the philosophy initiated in post-war Germany and France in the 1950s and 1960s. Francis Schaeffer interacted with the leading atheistic existentialists of his day, such as Martin Heidegger, Jean-Paul Sartre, Albert Camus, and Karl Jaspers (see The God Who is There [InterVarsity, 1968] and How Shall We Then Live? [Fleming Revel, 1976]). But many claim postmodernism has taken over the helm from existentialism as the more appealing and trendy secular philosophy—at least for those not committed to philosophical materialism of the tough-minded sort. For example, Richard Dawkins would claim neither existentialism nor postmodernism as his worldview.

Gary Cox, a proud atheistic existentialist, has written a brief and punchy treatise called How to Be an Existentialist: Or How to Get Real, Get a Grip, and Stop Making Excuses. The subtitle may prove attractive to those tired of victimology, psychobabble whining, and the naturalistic determinism that claims we have no free will. The cleverness of Cox’s title and book is that he defends existentialism in a how-to format, a genre enormously attractive to Americans with their optimistic proclivities. But this mood comes as a bit of a shock, since atheistic existentialism typically affirms the grim story of a meaningless (because godless) universe in which there is no life after death, and no divine guidance. To cite Sartre, we are “condemned to be free,” and man exists as a “useless passion”

Unlike postmodernism, which tends to emphasize culturally-formed beliefs at the expense of individual choice (“the disappearance of the subject”) without appealing to objective truth, atheistic existentialism tries to root itself in objective truth and place the individual in the driver’s seat. There are no supernatural consolations. You are responsible for your life. Meaning is in your own dying hands. Enjoy it while it lasts. Or, as Cox, sums up his thesis in the last sentence of the book, “Life has only the meaning you chose to give it” (113). (Please do not let the aspiring pedophiles, Nazis, sadists, rapists, and their ilk know about this philosophy.)

While many existentialist works are bulky tomes suffused with technical vocabulary (often including vexing neologisms) and convoluted reasoning, Cox’s book is crisp and clear. He knows the works of the big boys (particularly Sartre), but he can bring the gist of it to the masses.

Cox is exclusively concerned with atheistic existentialism, although various theists have claimed the mantle, such Martin Buber, Gabriel Marcel; and, most influentially, SØren Kierkegaard. But Cox spends little time attacking theism. He pronounces God dead, and then teaches us how to celebrate after the funeral.

There lies the first devastating defect. The case for theism is strong and getting stronger through scientific evidence (courtesy of the Intelligent Design movement) and philosophical argument. All the classic arguments for God’s existence have been refined and strengthened in recent decades. (See Douglas Groothuis, Christian Apologetics [InterVarsity Press, 2011], chapters 9-17.)

However, Cox is correct that without God, everything changes. We cannot cling to uniquely theistically-based beliefs, if we deny theism itself. As Friedrich Nietzsche wrote in his parable called “The Madman” in The Gay Science, when we stop believing in God, our entire view of ourselves and the universe changes radically. There are no objective standards for goodness. There is no meaning to history.

But there is a very simple and direct critique of Cox’s program of meaning- making and personal responsibility in an absurd universe.

This is deductively valid argument.  If the premises are true, then the conclusion must be true. Cox falls into the same philosophical trap as Sartre (his hero): They posit the radical freedom of human beings in an otherwise determined and meaningless world. As apologist Cornelius Van Til would say, this is akin to building “a ladder of water.” When Sartre was once pressed as to how meaningful human freedom could emerge from an impersonal and material world, he simply replied that it was “a mysterious upsurge of freedom.” This is hardly an explanation.

As Albert Camus said, existentialism attempts to transcend nihilism, the worldview that says everything (human choices included) is absurd and pointless. The German philosopher, Max Stirner, embraced this worldview, as did some twentieth century painters. However, this attempt to transcend nihilism misses the mark, since there is no basis on which to dignify the human person, according to atheism. Materialism leads to nihilism, and there is no exit.

Christianity, on the other hand, teaches that humans are made in God’s image and likeness, are placed into a world of objective meaning given by God, and are morally responsible to God for all their thoughts and actions. The existentialist objects that this limits human “freedom.” But it only limits autonomy from God, which is hardly meaningful freedom. This attempted autonomy from God—wherein the human will arrogantly claim supremacy—only ends in a vain attempt to transcend the prison of an impersonal, immaterial, and purposeless universe that is, in the words of Bertrand Russell, “just there.”

Therefore, however breathless or pugnacious Cox’s advice may be, it is built on sand; and, as Jesus said, the building cannot stand (Matthew 7:24-27). Or in the words of the Psalmist: