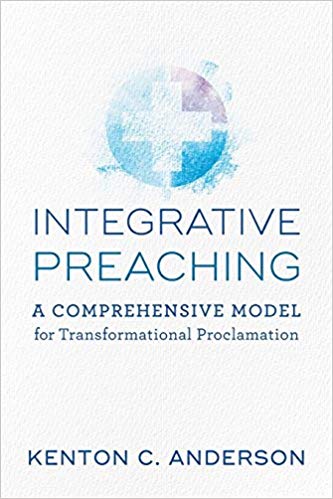 Kenton Anderson is president of Northwest Baptist Seminary and professor of preaching at ACTS Seminaries of Trinity Western University. An experienced homiletician whose pulpit ministry spans almost three decades, he has written numerous articles and books on preaching, perhaps most notably Choosing to Preach published in 2006. This book is his latest contribution to the field and reflects a fervent desire to provide a holistic scheme for the preparation and presentation of sermons that draw listeners into a deeper walk with Christ. As he notes, “A great sermon can transform us” (p. 144). All those who love preaching and see it as a key tool in God’s redemptive work will soundly resonate with that sentiment.

Anderson structures his book into four main sections. Part I, composed of four chapters, provides a detailed explanation of the model of integrative preaching. Part II is centered on what the author describes as the ‘functional elements’ of his integrative model: Story, Theme, Gospel and Mission. Part III addresses some of the key roles that preachers play such as pastor, theologian, worshipper and prophet. The fourth section describes the process of sermon preparation and delivery all the way from choosing the biblical text to Sunday’s presentation in church. Finally, following a brief conclusion, Anderson provides an appendix of two sermons that are designed to illustrate his model in action.

Anderson’s passion for preaching and its potential impact on listeners consistently comes thru in this book. Early on he notes that,

This book is about bringing our best. I have been doing this a long time, both preaching and teaching others to preach. I have learned some things along the way that seem to have been helpful. As I share with you, I trust that you will be led to a more effective way of leading others (p. xiv).

Moreover, his love of people and his concern for their spiritual welfare and ultimate transformation oozes out in almost every chapter. Integrative Preaching is more than another textbook on preaching; it’s essentially a pastoral treatise on how preaching might be improved so that God’s people can become all that they are called to be.

The author is also to be commended for how seriously he takes God and His role in the task of preaching. While Anderson doesn’t have a specific chapter devoted to a Theology of Preaching, it’s clear that prayer underlies his entire model of homiletical instruction. Only in a prayerful dependence on Christ’s saving work as applied by the Holy Spirit to the listeners can preaching ever be effective. As he argues in his chapter on the Preacher as a Worshipper,

Humans are driven by the need to overcome the gravity that keeps us grounded. We long to know the glory we were created for. Preaching is a way of getting us airborne. In preaching, gravity reverses, if only for a moment, as we are brought into the presence of our God. The language of this preaching is the language of prayer. This prayer elevates us and we are transformed (p. 109).

Having noted some of the book’s key strengths, it’s important to point out a few of its limitations as well. Perhaps the primary flaw is the sheer complexity of Anderson’s integrative model. I struggled to connect the various ways he describes how preaching in an integrated manner functions. I’m sure that it’s possible to blend the head and heart, combine horizontal and vertical approaches for the listeners that also incorporate both engaging stories and gospel conviction in a thirty minute sermon, but I wasn’t convinced that this model is the best way to accomplish all that. In at least two places, Dr. Anderson provides a visual schematic of the elements that comprise his approach and they both overwhelmed me. In fact, the numerous and various aspects that make up this integrative model strongly reinforced my own opinion that the best sermons focus on communicating one main idea from a biblical text in a clear and compelling fashion. While I don’t think he intended this, Anderson’s methodology seems to run in the opposite direction.

A second limitation, albeit a less serious one, was the amount of conceptual discussion in the book without enough corresponding illustrations. Dr. Anderson clearly thinks well and loves to communicate in the realm of ideas. In fairness, he did sprinkle in some good illustrations along the way. But he could have done this much more for the benefit of his readers, especially those who think more concretely. Not only would this have helped to clarify his points along the way but it would have also made the book far more enjoyable to read.

This is a book that I would recommend but only to the most experienced of preachers. Those who understand the mechanics of their craft and practice it regularly will find some things of value here. But for those who are students or new to the practice of preaching, I’d suggest waiting a few years before you sit at the feet of Dr. Anderson. The key rule in all communication is ‘be clear, be clear, be clear, above all else be clear’. Unfortunately, you won’t learn that from this text.