Is God a Moral Monster? Making Sense of the Old Testament God 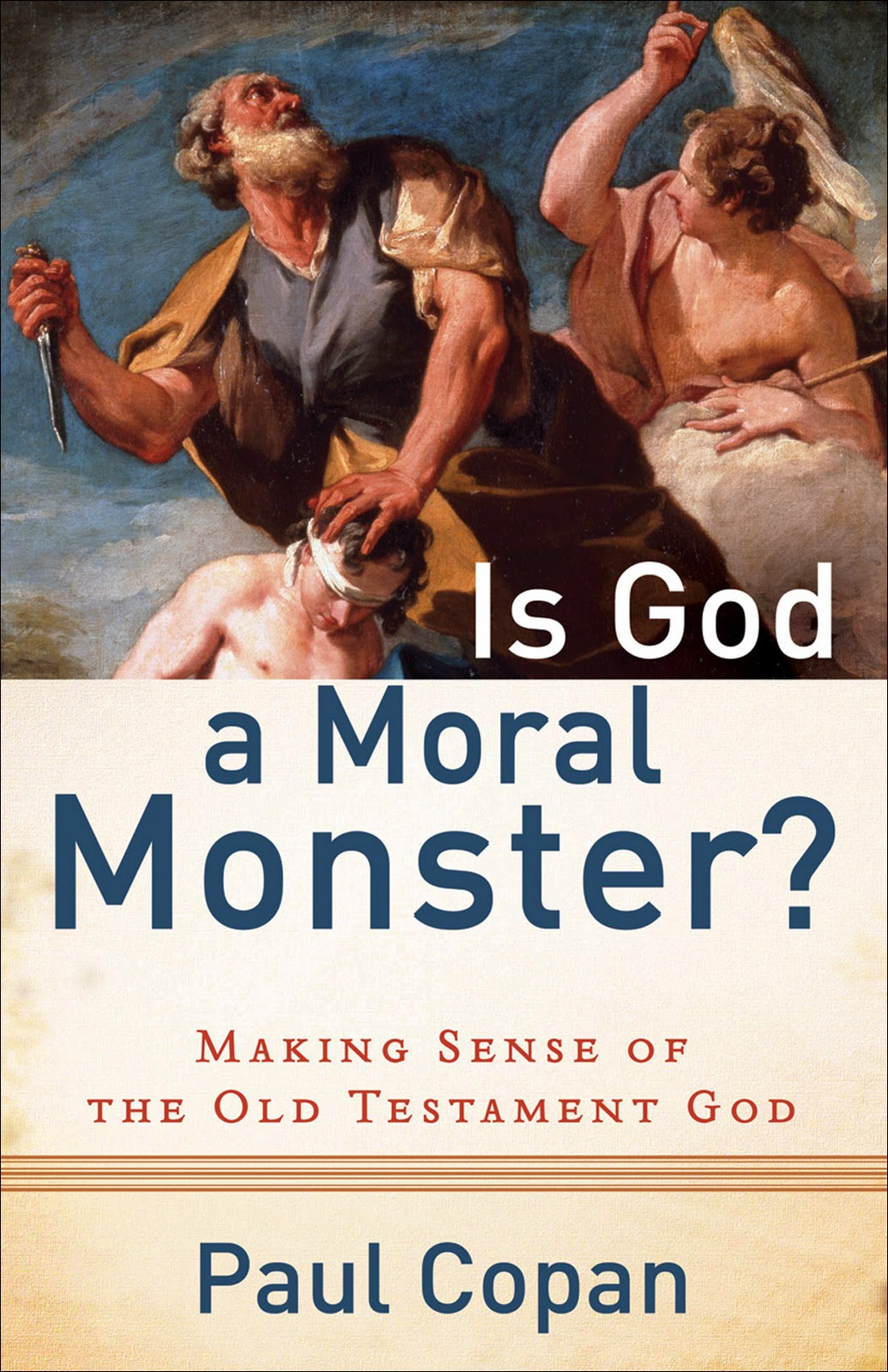 At first glance, the God of the Old Testament can appear unsavory. A source of commands ranging from violent and brutal to simply strange, Yahweh reveals Himself time and again as an angry God who must be appeased – even to the point of child sacrifice. Such are common charges leveled against the Bible from neo-atheist critics – those believers-in-nothing who move beyond a personal lack of belief to criticize belief wherever else it might be found. Imagine a faithful Christian’s surprise when, upon opening her Bible to refute such charges, she instead stumbles across Joshua 6:21 that tells how the Israelites utterly destroyed the inhabitants of Jericho, “men and women, young and old, oxen, sheep, and donkeys, with the edge of the sword.” Or if she turns to Genesis 22 and finds Abraham’s barbaric call to sacrifice his son Isaac? And didn’t Israel keep slaves, including wives taken as spoils of war? At first glance, Scripture seems only to make the neo-atheist case. However, Paul Copan’s Is God a Moral Monster? Making Sense of the Old Testament God offers a deeper understanding of the historical and literary context of such passages to show just how wrong these interpretations are. The key to Copan’s interpretive method is wonderfully simple: one must carefully read the text in question.

More than simply an encyclopedia of difficult Bible stories or a reference book for interested believers, Copan intentionally frames his arguments within the crosshairs of neo-atheist objections to the authority and historicity of the Biblical text. In the spirit of Peter’s command to actively engage in the defense of our faith, Copan continually references popular critics of Christianity and the Bible as he moves systematically through the Old Testament to explain what the text actually says on issues like slavery, women’s rights, violence in warfare, and the “ubiquitous weirdness” (p. 70) of kosher laws. In each case, a thoughtful, informed, contextual understanding of the Bible is all that is needed to provide an apologia to the thoughtless accusations of the neo-atheist camp.

Consider, for example, the charge that God is a jealous egotist; Copan needs only seven pages to point out the difference between human arrogance and divine humility: it is not narcissistic to demand worship if honor is genuinely deserved. The problem with human pride is not simply the expectation of respect, but the unjustified expectation; similar to the way that my wife is right to expect me to display my love for her, God rightly expects His creation to show Him the respect He is owed. And considered in the light of the kenotic nature of the incarnation–that ultimate act of undeserved self-sacrifice–this charge appears particularly silly; as Copan says, this “is the argument of village atheists, not those who have seriously examined the Scriptures” (p. 33).

This is the driving theme of the book: the Bible does not need to be excused, merely understood. A proper hermeneutic that treats the text appropriately reveals that the most common criticisms of Scripture are based on misunderstandings and misinterpretations. Consider the Abraham and Isaac on Mt. Moriah. Frequently cited not only as evidence of God’s brutality and heartlessness, but as proof of Yahweh’s blood-thirsty craving for child sacrifice, a careful reading of this story reveals that God never truly intended Abraham to kill his son – and that Abraham recognized this fact from the beginning. Copan works step-wise to show that, in the light of God’s promises in Genesis 12 and 17, Abraham’s experience with Hagar and Ishmael in Genesis 21, the odd phrasing of Yahweh’s command to go to Moriah with Isaac in the first place, and the personal relationship he had pursued with His Creator throughout his life; Abraham held a rational confidence that he would descend from the mountain with Isaac at his side. His comment in Genesis 22:5 (“We will worship and then we will come back to you,”) reveals this assurance. It is simply not the case that the God of Bible was expecting His altar to run red with Isaac’s blood. Indeed, in a move that Kierkegaard would have done well to consider, Copan simply reads the text and never tries to get God off of a hook that He was never actually hanging on in the first place.

In a similar fashion, the apparent brutality of Canaan’s conquering offers another example of how careless criticism clouds understanding and that a comprehensive reading of the text reveals little need to justify the commands God gave to Joshua and Israel. Drawing on insights both from biblical critics and archaeology, Copan argues that places like Jericho were not, in fact, suburban cities filled with families, but military garrisons manned with soldiers (p. 176). Understanding the process Joshua used – at Yahweh’s explicit command – to attack the city reveals a more than week-long process of repeated warnings and proclamations about Jericho’s coming destruction. Rahab’s speech in Joshua 2, the account of the Jordan’s crossing in Joshua 3, and the nature of the priestly procession around the walls in Joshua 6 all reveal that Jericho was not ignorant of who they met on the battlefield. Not only had God come to judge their unrighteousness, but he had given them ample opportunity to repent. The intention of God at Jericho (and throughout the Promised Land) was not simply to massacre Canaanites, but to drive a group of unrepentant sinners out of a region destined for God’s people. So, accusations of oppressive colonialism, nation-building, or xenophobia simply fail to understand the focus of the Joshua account.

And yet, why does a careful reading of the Jericho account seem to contradict Copan and say that women and children were present at the city? How could the Israelites put “men and women, young and old” to the sword as in the verse mentioned above if there were no families around to be slaughtered? Copan’s answer here is so simple it almost sounds like a trick: this is an example of ancient near-Eastern exaggeration rhetoric that metaphorically expresses the totality of Israel’s victory, so “just as we might say that a sports team “blew their opponents away” or “slaughtered” or “annihilated” them, the author (editor) likewise followed the rhetoric of his day” (pg. 171). Once again, Copan proves that the Biblical text simply needs to be understood free from anachronism in order to answer neo-atheist objections.

More than simply defending the Bible from such attacks, Copan builds a positive case that God and His Scripture are appropriate sources for moral truth and guidance. Throughout the book, Copan points out the unusually restricted character of the Torah’s morality that frequently diverged from commonly held moral ideas of other contemporary cultures. To take another example from Joshua, the hanging of the kings of Ai and those of other cities seems barbaric to modern sensibilities, but such a display of power was quite common in Joshua’s day. However, thanks to divine commands like the one found in Deuteronomy 21:23, Joshua honored his enemies in an unusual way by burying their corpses after only a day, rather than allowing them to completely decay and be eaten by wild animals.

Copan’s discussion of Old Testament slavery is in the same vein, for he devotes three chapters to displaying not only how the Torah defined rules to ensure the safety and dignity of servants, but how such regulations were completely out of character at the time and place of their creation. Israelite slaves under the Torah were treated far better than slaves in contemporary cultures – and far better still than were Africans in the American South (a motivating image for many neo-atheist critics). Copan uses such facts to argue for a progressive revelation of moral truth by God over the course of history. In a world marred by sin, Yahweh’s special revelation – first to the Jew, then to the Gentile – gradually revealed deeper and deeper truths about the true nature of morality because they revealed deeper and deeper truths about the nature of God Himself. As Copan’s penultimate chapter argues, and as many apologists have trumpeted throughout the ages, morality itself only makes sense within a theistic context that can ground moral truths in the person of God. Christianity takes this moral argument one step further to say that the Incarnation offers the climax of this revelation, so “the ultimate resolution is found in God’s clarifying Word to us and the One who became flesh and lived among us, who died and rose again on our behalf” (pg. 222).

Copan’s clarion call to a careful reading of the Bible has produced a work that should itself be read carefully. Addressing more than ten distinct moral issues in the pages of the Old Testament, Is God a Moral Monster?’s greatest failure is simply the lack of an index that would assist in referencing its insight. Contemporary critics of the Bible and its historicity would do well to hear Copan’s overarching point: read the Bible properly before you ridicule it; otherwise, you will likely end up looking ridiculous yourself.