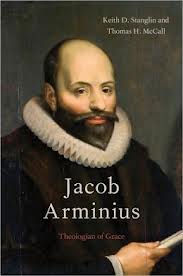 Eponymous movements inevitably take on lives of their own—often straying in directions far removed from their “founders.” One need think only about Lutheranism, Darwinism, or Calvinism to realize that these labels now encompass beliefs and commitments that differ from those of their namesakes, but each also comprises a range of positions, some quite at odds with each other. Arminianism is no different, and one of Stanglin and McCall’s major goals is to uncover what Arminius himself believed by a careful, if not exhaustive, survey of his own writings—in their original Dutch and Latin, as well as English translations. They contend that many people view Arminius as a saint or as a heretic, as Reformed or not, as anti-scholastic, and often anti-predestinarian—uncritically ascribing to him views he never held. The book is heavily documented from original sources (not only from Arminius but from many of his contemporaries who supported or opposed his views) as well as the latest secondary research. The authors’ goal is a more objective picture of Arminius by seeing him within his own context. In their words, “this book is meant to provide an overview of Arminius’s theology that is methodologically rigorous and informed by the latest scholarship and, at the same time, accessible to the interested theologian” (p. 21). On the next page they add,

One of the goals of surveying Arminius’s thought is to challenge some of the common misrepresentations of his theology. Of the many labels and caricatures (both appreciate and perjorative) attached to Arminianism, perhaps none is more prevalent than the charge that Arminius undermined the Reformed doctrine of grace, thus elevating autonomous human free will and introducing anthropocentrism into Protestantism. On the contrary, those who study Arminius or get a glimpse of his thought in this volume know that he was no enemy of grace (p. 22).

Stanglin is associate professor of historical theology at Austin Graduate School of Theology and McCall is associate professor of biblical and systematic theology at Trinity Evangelical Divinity School. While they confess they have their own sympathies as they approach their project, by their copious quotations of Arminius and his detractors, they succeed in avoiding a mere hagiography that is intellectually suspect.

They begin with a brief account of Jacob Harmenszoon’s life (yes, that was his last name before he latinized it, as was the Dutch academic custom). Living from AD 1559 – 1609, Arminius was educated in the Netherlands and Germany and served as a minister in the Dutch Reformed Church (being highly recommended for the position by Beza) before he took an academic post at Leiden University. His tenure there was tumultuous as it became clear that his developing theology put him at odds with other theologians and pastors, especially his Leiden colleague, Franciscus Gomarus (he of Supralapsarian fame).

The bulk of the book follows key theological themes within the Arminius corpus of writings under three large categories: God and Creation; Providence and Predestination; and Sin and Salvation. The authors divide each of these into subtopics according to how Arminius understood each and how they played into the current and later controversies that surround them. The authors show how Arminius started with a primary commitment to Scripture (against, the traditions of Catholicism but also some of the current Reformed interpretations of the creeds fashioned in the aftermath of the Reformation), but was also thoroughly versed in the writings of the early church fathers as well as major theological figures throughout the 1500 years of church history (e.g., Augustine, Luther, and Thomas Aquinas). Since much of Arminius’s writing emerged in the heat of controversies—in distinction to systematic treatments such as Calvin’s, Institutes—Stanglin and McCall sift through his various works to inform their understanding of Arminius’s views. At the same time, such disputations forced Arminius to adopt a polemical stance, so we see clearly his attempt at cogent presentations and defenses in the course of these discourses.

Stanglin and McCall also helpfully point out those many places in which Arminius developed his views in the context of his pastoral concerns (as well as philosophical or creedal disputes). As only one example among many, Arminius came to question the Reformed formulation of “soteriology” when he witnessed its results among his parishioners. Some in his Dutch Reformed Amsterdam congregation had no confidence in their election. They never had assurance of their salvation since their election was grounded in the hidden counsels of God. Only those who persevered to the end were saved; in the interim one might have merely “temporary faith,” as the Reformed put it—not true saving faith at all. Alternatively, Arminius discovered others who felt very “secure” of salvation though their lives gave little evidence of spiritual transformation. Were they falsely assured? As the authors paraphrase Arminius: “If one affirms the impossibility of apostasy, this doctrine does not console as much as it engenders carelessness with regard to sin” (p. 181). Arminius went back to the Bible to see if he could arrive at a true understanding of the ground for assurance of salvation. He concluded that assurance must reside in the doctrine of God, and more specifically, God’s love for all people (which his Reformed detractors were not willing to affirm). Based on Hebrews 11:6, among other places, he concluded that “… if one truly seeks God, one should not despair, because God has promised the reward to seekers” (p. 186). Assurance can rest in God’s love for all, not some hidden election of only some.

In a concluding chapter Stanglin and McCall accomplish several goals. First, they trace the history of Arminian thinking after his death under these headings: Remonstrance and the Synod of Dordt; Anglo-American Arminianism (the Anglicans and Wesleyans as well as many Baptists and other groups—many of which, the authors claim, are not even aware of their Arminian leanings); and Did Arminius “Lose”? Second, they discuss Arminius as a theologian, including a summary of his key themes and whether or not he should be considered “Reformed.”

Third, they trace what they see as Arminius’s legacy in the centuries that followed his death. It is worth listing them here, as they might not be apparent in a context in which (at least among some Evangelicals) he is viewed with suspicion if not disdain. According to these authors, the Arminian legacy includes Scripture above confession and catechism; unity and toleration; good conscience; and God and humanity: Holy Love, Sinful Creatures and Free Grace. The bibliography includes ninety-two pre-1800 entries and many times more than that of modern sources. In case one is rusty on the Ordo decretorum Dei (Order of God’s decrees) among the competing alternatives—Supralapsarian, Infralapsarian, and Arminian—the authors provide a helpful chart on p. 140.

This is an eye-opening book for any who have read only what “the other side” says about Arminius. At times labels such as “sovereign grace” or the “doctrines of grace” are co-opted by Calvinists as if “works,” “human effort,” “semi-pelagian,” or “anthropocentric salvation” apply to all not aligned with them—especially Arminians. This book dispels this caricature as unfounded, at least in the writings of Arminius himself, despite any subsequent “aberrations” from his views (and there are many as the beginning of this review acknowledged). It’s also wise to “hear it from the horse’s mouth” when it comes to understanding someone’s position. As I regularly tell my students, if you are going to argue against a position, be sure that you have read and understood that position from its proponents.

So I encourage any who want to understand Arminius: read this book. It will become the standard volume for years to come as an accessible primer on Arminius. The book also serves as a great introduction or refresher for students who want to understand some of their theological forebears and the struggles for orthodoxy in a world in which theology seemed to matter greatly—as it did in Spain and Holland during the period covered by Arminius’s life. We may puzzle that “mosque and state” are so comingled in places like Iran today. Well, welcome to “church and state” in 16th century Europe in which Calvin and Arminius lived! Finally, the book serves as an intriguing reminder of what differences theology makes in people’s daily lives, whether or not they can articulate their beliefs. As the one example I cited above shows, whether or not, and on what basis, one has assurance of salvation is a practical and pastoral—not to mention eternal—issue.