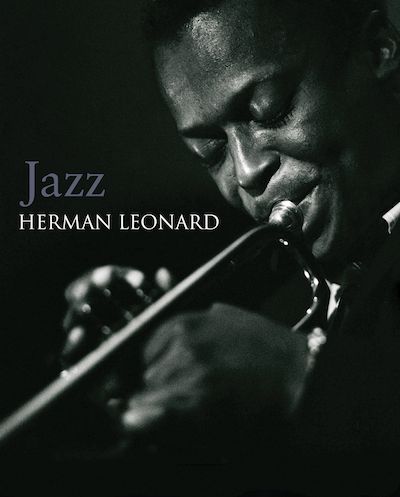 Sadly, jazz photography is not a part of mainstream American culture today. By jazz photography, I mean photographs of jazz musicians, either playing or in other situations. Leonard’s photographs are usually related to their music in some way, he also catches his subjects in other contexts.  One could also speak of a jazz style of photography (whether it be of jazz itself or not) which the best jazz photographers bring to their craft. In the introduction to the book, Quincy Jones is quoted as saying, “I used to tell cats that Herman Leonard did with his camera, what we did with our instruments” (8). He was a jazz man whose instrument was the camera, and was accepted as such by the musicians he so artfully and intimately captured.

But one might argue that photography ill fits jazz, since it freezes a moment in time. There is no beat, no group improvisation, and no swing. You do not tap your foot to a photograph. That is, the musical medium of jazz may not comport with the visual medium of photography. When the medium mismatches the message, a kind of aesthetic violence is perpetrated—even when few notice.

The essence of jazz is syncopation and improvisation (usually within an ensemble, but also in solo settings) within a uniquely American tradition of the music (the origins of which are disputed in the literature). A jazz photographer faces the daunting charge of getting “into the moment” or “into the groove,” to try to seize something unique, often beautiful, and evanescent. Herbert Leonard has achieved this arcane art in black and white photographs, spanning a half decade. Although he later worked a bit with color, he insightfully says, “When you are looking at a black and white picture, your brain doesn’t have to work as much, You’re looking at a graphic shape rather than the colour value—and in that sense, the image becomes stronger” (303).  Or, as Reggie Nadelson writes in the introduction, “Many of Herman Leonard’s photographs tell a complicated story; sometimes you have to look two or three times to see it all” (9) Leonard bids us to slow down, fix our gaze, and behold the scenes and souls he studied. No multitasking should be involved.

This is not landscape photography, but people photography. The subject matter is usually musicians in unique motion, making music with others (or waiting pensively backstage). The human figure bears its own mysteries, crying to be unlocked and revealed through some manner of representation. People move and surprise; jazz moves and surprises. As jazz critic Witney Balliet (who resided high in the firmament of jazz writers) famously said, “Jazz is the sound of surprise.” By contrast, the photograph is static, inert.  Nevertheless, the essential spirit of jazz may be hinted at or implied in the parts, even in the mute graphic representations, as Leonard himself states:  “I was always impressed by the simplicity of great artists like Picasso who could take a charcoal and do a little line sketch and you’d see the whole character of the person. I thought I could do that with light” (300).

And so he did. A skilled photographer uncovers the philosopher’s stone and endeavors to steal the essence (or near essence) of the whole from a fleeting part. Through film, the artist searches for the apotheosis of the form, or at least to approximate it.  Few have this nascent gift or develop it into an art. Leonard did, and people noticed.

This large book is gloriously filled with images from the great performers of jazz in this sixty-year career, beginning in the late 1940s. Most of them were taken in the 1940 and 1950s. We are graced with the visages Ella Fitzgerald, many of Miles Davis, covering his entire career (what a noble face—if not character—he had), Duke Ellington, Billie Holiday, Dexter Gordon, and many more. One photo simply depicts Lester Young’s hat atop his saxophone case, with a cigarette balanced carefully on an empty Coke bottle. Leonard understands light, figure, foreground, focus, and background brilliantly. (Few of these photographs were posed; when they were, they had nothing to do with the cheesy, corning, narcissistic posing of today.) He was especially masterful in capturing—of all things—cigarette smoke, which was ubiquitous in jazz performances of the time he records. The smoke is keenly articulated and forms a sort of nimbus on the jazz musicians. The photo of a young Dexter Gordon most effectively uses this technique (which Leonard discovered accidently), for the cover of Jazz, by Gary Giddins and Scott DeVeaux  (W.W. Norton, 2009).  Leonard’s camera angles are often arresting as well (there are no cliché portraits), often seizing that elusive jazz expression of pure intensity of joy and longing and pain. Although you will not likely find this in any systematic or biblical theology, this is where jazz meets general revelation.

General revelation is the doctrine that the one true, infinite, personal, and triune God of the Bible reveals truth about himself and creation in ways outside of the biblical text and specific supernatural acts. For example, “the heavens declare the glory of God” (Psalm 19:1; see also Romans 1:18-21). And humans themselves bear the divine image (Genesis 1:26; 9:1; Psalm 8). In Cornelius Van Til’s words, we are “finite replicas” of God, although fallen and far east of Eden (Romans 3:14-26). As such, even if these image bearers fail to recognize God as Creator and Redeemer, they cannot exchange their essence for something else, something of their own choosing.

One aspect of the divine image is creativity. As Dorothy Sayers wisely noted, in Genesis one, the only thing we know about God is that he is a personal Creator. If, then, he makes humans in his image, then it is logical to infer that one of their distinctive qualities would be creativity. Even the non-Christian is gifted with the ability to transcend the merely material or machine-like arrangements of the created world. As free-jazz pioneer and journeyman, Peter BrÖtzmann recently said in a biographic film called, “Soldier of the Road” (2012), “Music comes from another world.” We are all creators in some way, and some develop this capacity through the rigors and ecstasies of jazz. When the jazz musician is in the flow of creative intelligence, he is, in a sense, touching something objectively real about God’s creation at a deep level—and he may be manifesting that reality to those listening as well. A sense of this intrepid enterprise can be represented in black-and-white photography (and film, but that is another story).

Yet, the Christian critic may strenuously object that all of this talk is merely worldliness. As James said, part of pure religion is to “keep oneself from being polluted by the world.” (James 1:27; see also 1 John 2:15-17)  After all, jazz had (at in least part) its beginnings in New Orleans’s houses of ill-repute. So many jazz musicians have used illegal drugs and some died of drug overdoses (notably the inimitable alto saxophonist Charlie Parker at age thirty-four and the singer Billie Holiday (penniless) at age forty-four). Even more debauchery may be chronicled. All this is true—and painfully irrelevant. God is the giver of every good gift (James 1) and liberally gives gifts even to those who rebel against him. (Of course, some jazz musicians have claimed to be Christians, such as pianist Mary Lou Williams and Duke Ellington.)

Christian philosopher, scientist, and apologist Blaise Pascal helped explain this enigma of the human condition. He argued, humans are now “deposed royalty.” We are great given our divine origin and image, but deposed, given the fall into sin. This is true for both Christians and non-Christians. Therefore, we are a strange mixture of good and evil, beauty and ugliness, intelligence, and stupidity. (See “Deposed Royalty,” in Douglas Groothuis, On Pascal [Belmont, CA: Wadsworth, 2003].) If one cannot hear greatness in the arrangements and playing of Duke Ellington or selected saxophone solos of John Coltrane (such as in “A Love Supreme”), one does not likely understand the medium or its meaningful mysteries. (For an approachable and learned introduction to the art form of jazz, see Why Jazz: A Concise Guide [Oxford, 2012.] On the importance of understanding higher and lower levels of culture, see Kenneth Myers, All God’s Children and Blue Suede Shoes: Christians and Popular Culture [Wheaton, IL: Crossway, 1989].)

Jazz, a book of jazz photographs by a jazz photographer (Leonard is known for photographing nothing else), offers a double helping of common grace and reason to praise the God who made us—saved and unsaved—in his image. First, we can thank God for jazz itself, that unique, uniquely American, varied, and ever-compelling art form.  (For one of the few Christian reflections on jazz, see Robert Gelinas, Finding the Groove [Zondervan, 2009].)

Second, this collection of memorable photographs of jazz musicians has its own eloquence and charm qua photography. These photographs should be beheld, not simply viewed. (I owe this distinction to Marva Dawn, which she made in Talking the Walk [Brazos, 2005].) To behold something is to let its objective reality affect one’s very self. To behold demands more than giving an object a glance or a glimpse. One lingers when one beholds something, such as a fine painting, a sculpture, or a photograph. Consider the King James Version of John the Baptist’s exclamation about Jesus, “Behold, the lamb of God, who takes away the sin of the world” (John 1:29). John is not merely calling others to note that Jesus has entered their visual field. Beholding takes discipline and focus, especially since our culture is saturated by moving images, usually of little worth, but which are highly stimulating and difficult to avoid. I am only now learning to behold vintage and valuable contemporary photography as an art form; however, I know that one looks at the foreground, the background, the lighting, and the angle of vision. Further, we can ponder the people and their setting by noting facial expressions, body posture, and by imaging ourselves entering the photograph.

Jazz splendidly offers the careful observer a portal into American musical culture, and even a glimpse into the souls of musicians, made in the image of God. For that, we should be grateful to God, the divine artist.