Craig L. Blomberg's Review of "Jude and 2 Peter" from the Baker Exegetical Commentary on the New Testament by Gene L. Green 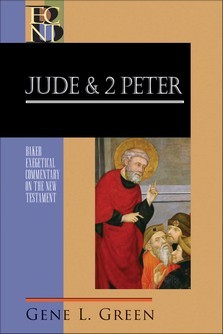 Until just over two years ago, it had been almost a quarter of a century since 2 Peter and Jude had been well served by a detailed, evangelical commentary.  Now we have had one a year, for each of the last three years, with Peter Davids in the Pillar series, Ruth Ann Reese in the Two Horizons and now, arguably the best of all, Gene Green, New Testament professor at Wheaton College, on the Greek text of these two little letters for Baker.

Green breaks little new ground in the introductions to the two letters, but then there is little new ground to break.  Granted Jude and Peter both likely employed amanuenses (accounting for the varied styles between 1 and 2 Peter), nothing prevents each of them from having been written by the authors to whom they have traditionally been ascribed in the 50s and 60s, respectively.  The so-called early Catholicism of the letters does not hold up to close scrutiny.  Peter is far more likely to be dependent on Jude than vice-versa.  His lack of more verbal dependence is due to his use of imitatio-creatively rewording and contextualizing his source material for a new context.  Jude is probably Palestinian but we cannot pin down the theology/philosophy of his false teachers.  2 Peter is probably directed against eclectic errorists who have imbibed a fair amount of Epicureanism.  The overarching problem is their disbelief in God’s active role in the universe, thus leading them to doubt any personal, final judgment.  As a result, they indulge in gross immorality, especially in the area of sexual license.  Greco-Roman rhetorical outlines of the two letters prove suggestive but ultimately do not prove superior to more straightforward topical ones.

JJude’s call to his audience involves standing fast in “the faith” (v. 3)-“the common property of the believing community” (p. 56).  His opponents are “dreamers” (v. 8), not in the sense that their views amount to nothing but dreams but in that they claim divine revelation.  Jude therefore replies by frequent appeal to Old Testament examples of other arch-sinners and heretics to illustrate the sure destruction they will face if they fail to repent.  But his treatment of the characters of Hebrew Scripture is informed by Jewish traditions about their lives and exploits, so it should not cause surprise when Jude turns also to the pseudepigraphical works of the Assumption of Moses and 1 Enoch for two of his illustrations.  Although Jude views the excerpts cited as “prophecy,” this does not mean he accepts their claims for authorship or treats the entirety of his source documents as canonical.  In fact the parts he refers to do cohere with revealed Scripture and are actually mild in comparison to far more flamboyant uses of such traditions outside the New Testament.

“While the heretics were trying to rend the social fabric of the church, Jude calls the members of the congregation together” (p. 120; on v. 20).  The letter ends, however, not with some solemn statement of the false teachers having committed an unforgivable sin but in the hopes of their repentance and subsequent forgiveness by God.  Church members are called to varied responses to the various individuals, treating some more forcefully and others more mercifully, but the remedial goals in each case prevail.  “The hope that pervades the doxology [vv. 24-25] is astounding in light of the grave situation that Jude faced as he tried to extract the church from the jaws of the heretics” (p. 131).

Second Peter begins with one of the clearest references to the deity of Christ in the New Testament (1:1).  The letter body opening in vv. 3-11 is unusual in being neither a thanksgiving nor a blessing, yet it still previews key themes of the letter.  The “sorite” or chain of virtues in verses 5-7 provide the purpose of our calling as Christians and the antidote to the immorality of the heretics.  They also make it clear that it is in a moral rather than an ontological sense that we can participate in the divine nature (v. 4).

As throughout Jude, though in even more detail in many parts of his treatment of 2 Peter, Green excels in discussing the Greco-Roman backgrounds of key terms used.  He regularly cites relevant Hellenistic texts in full, to enable both comparisons and contrasts with the biblical authors’ use of similar language.  Particularly in 2 Peter, God is portrayed in the language of benefaction; we appropriately reciprocate with faithfulness, holy living, and love.  Using the language of today’s youth culture’s sports, Peter commends “extreme” virtue (p. 196).  Verses 12-15 do reflect Peter’s imminent death, but they do not turn the entire letter into a final “testament” and thus do not necessitate Bauckham’s conclusion that it must be pseudonymous.

Chapter 1:16-21 presents Peter’s eyewitness testimony to the Transfiguration to provide support for the reality of the coming Parousia, which that earlier event foreshadowed.  But if Christ returns, then final judgment and moral accountability are assured, contra the views of the false teachers.  This line of thought also gives the lie to the claim that the Old Testament prophets who predicted such judgment were merely speaking in their own power and not under divine inspiration.

The center third of the letter focuses on the immorality of the false teachers.  Here the brief reference in Jude 6 to the almost primordial sin of the fallen angels mingling with human women to create the exceedingly wicked race destroyed by the flood is expanded (2:4), doubtless under the influence of 1 Enoch.  Lot’s “righteousness” (v. 7), so compromised when he offered his daughters to the people of Sodom who wanted to ravish his angelic guests, may again be informed by subsequent Jewish tradition which supplies somewhat balancing virtues.  But it is best to understand his distress in this verse as his oppression by the threatened violence of Genesis 19:9 not his grief at the wickedness of the townspeople. The false teachers, shockingly, promote their lasciviousness even at the very love feasts that formed the earliest Eucharists (v. 13).  But, if they were treating them like Greco-Roman religious symposia, which culminated too often in drunken orgies, the behavior is at least understandable if not defensible.  Ultimately, “these people speak great, bombastic nonsense (2:18), but in the end they are no more well informed than the beasts and hence are proper objects of retribution” (p. 277).

In chapter 3, Peter speaks of three worlds:  the antediluvian (v. 6), the present (v. 7) and the coming (v. 11).  The rupture caused by the flood between the first two of these will be matched by the rupture caused by fire between the second two.  But just as it was the same world after the flood as before, despite grave destruction requiring renewal, so also after the fire.  There is continuity as well as discontinuity between this heaven and earth and the new heavens and earth which gives meaning to our present attempts to steward and renew this cosmos.  The delay of the Parousia proves merely that God’s timing is not ours.

Frequently, discussion of disputed grammatical classifications would have proved welcome, especially because of the often convoluted syntax of the letter, and because of the expectation of such grammar in commentaries on the Greek text of the New Testament. At times the barrage of background information, even for words of only medium-level significance for a given verse, threatens to overwhelm the reader and distracts from the main points at hand.  Occasionally, one could have hoped for a bit more of Jewish backgrounds to balance out the Greco-Roman ones  One might have even wished for short sections of application at the end of each segment of commentary, like some (but not all) of the volumes in this series have provided.  But these are faint protests in the midst of loud praise-for Green’s clear elucidation of the text’s meaning, for his robust defense of traditional authorship and setting, for his command of the rhetorical techniques the inspired authors employed, and for his mastery of primary source material.  The book is a most welcome addition indeed to the growing commentary literature on these two traditionally underserved books.