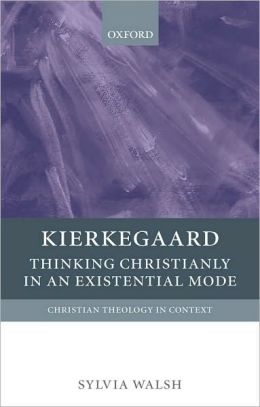 Secondary literature about the 19th Century Danish philosopher Søren Kierkegaard tends to be polarized between the introductory and the highly academic. Philosopher Sylvia Walsh has written a concise, philosophically-astute examination on the philosophical and theological influence of Kierkegaard which, in essence, offers much to the novice and experienced scholar. As part of the Christian Theology in Context series (other titles include works on Karl Barth, St. Augustine, and others), Kierkegaard has finally been granted a theological examination. Whereas the vastness of his work is philosophical in nature, Kierkegaard largely centered his work in or around the Christian lifestyle. Published a mere four years prior to Kierkegaard’s bicentennial, this apt addition to this series is a timely source for Kierkegaardian scholarship.

Walsh prefaces the density of the text with a biographical introduction to Kierkegaard. While even the most rudimentary student of Kierkegaard is probable to have some knowledge of the captivating (and tragic) nature of Kierkegaard’s broken engagement with Regine Olsen, Walsh brings into focus not only her influence, but also intellectual impressions. For example, theologians will be interested in the intellectual influence on Kierkegaard by German Reformed theologian Friedrich Schleiermacher. Despite a rejection of Schleiermacher’s theology, Kierkegaard shared his disillusionment with theological rationalism. This prompted him to examine existential interests in God such as the intuition of one’s complete need to rely on God  – a key component to Kierkegaard’s work.

The commencement of the theological material begins with an examination of Kierkegaard’s understanding that Christianity is an “existence-communication.” Walsh explains that “what Christianity seeks to communicate to individuals is not knowledge about Christianity…but an inward capability for existing authentically through a relation to God (26).” This connects to Walsh’s incorporation of a brilliant examination of Kierkegaard’s epistemology. While many categorize Kierkegaard as an irresponsible fideist (a stance on knowledge that stipulates that faith is above or against reason), Walsh takes Kierkegaard’s value of subjectivity and articulates its importance to the Christian lifestyle while still upholding objective truth. It is commonplace in the philosophical arena to view objectivity and subjectivity as opposed. This false dichotomy undermines the existence-communication aspect of Christianity by making knowledge of Christianity distinct from experiencing Christianity. That objective truth exists is not primary. It does exist. Yet, the Kierkegaardian focus is on how the subjective individual relates and appropriates knowledge into one’s life.

Existential thinkers like Kierkegaard tend to grant more attention to the human condition and related emotions than other philosophers. The famed Fear and Trembling offers a unique perspective on the biblical account of faith as seen in Genesis 22. Walsh connects the human condition to Kierkegaard’s more perplexing work, The Concept of Anxiety, which examines the psychological condition of the Genesis account of creation. Despite widespread biblical and theological commentary on original sin and its subsequent results, Walsh rightly notes that it was Kierkegaard who first introduced the psychological condition of anxiety. Continuing to emphasize the existential components, Walsh writes, “sin is an actuality that should be dealt with in a personal…manner, not in a scholarly context, which alters the true concept of sin (81). Sin continues to enter into the world in the same manner by which it captivated Adam. Its continual entrance is through “qualitative leap” into sin by each individual. This places significant responsibility on the individual for each of his or her own sins. The freedom to make a choice is the point in one’s life that anxiety forms. For Kierkegaard, anxiety is a precursor to sin as the freedom to choose a sinful act or one of righteousness is on each individual. Anxiety, thus, predates the first sin by Adam thereby connecting Adam with each subsequent human being who likewise experiences anxiety as part of making decisions.

Perhaps most controversial to Kierkegaard’s interaction with theology is his handling of the incarnation of Christ – an event which Kierkegaard calls the “absolute paradox.” Walsh writes that Kierkegaard “was not interested in expounding on the doctrines of the incarnation and atonement as such, but clarifying the meaning for the single individual who encounters Christ” (111). After briefly explaining established orthodox understanding of the incarnation, Walsh integrates Kierkegaard’s understanding of the incarnation as paradoxical. Once again, Walsh indirectly (and masterfully) handles misinterpretations of Kierkegaard’s thought. After refuting the notion that paradox entails an endorsed logical contradiction, Walsh defines “paradox” as a state of affairs that entails two propositions that naturally stand in opposition yet remain truthful. Neither proposition necessarily excludes the other, an essential component for a logical contradiction. This language of paradox might leave the Christian scholar in some angst. However, thinking in terms of paradox is fundamental to the individual wanting to encounter Christ. In becoming incarnate, Christ combined opposing conditions, finitude and infinitude, and eternal and temporal. The combination of such cannot be reconciled through human reason alone. It is at this juncture that the object of the incarnation is only ascertained through faith. This is not meant to stipulate that faith is against reason, but rather that issues of faith are above reason. Walsh later writes that it is this special paradox that is unique as it is the greatest possible qualitative paradox (129). This paradox is no mere philosophical or theological abstract experiment, it is the essence of Christianity.

Walsh adds personal elements into Kierkegaard’s understanding of the atonement. Kierkegaard found it best to integrate the individual into the atonement, a continuous involvement done through Holy Communion. As Walsh writes, individuals are not merely “spectators and observers at a past event (incarnation) but accomplices in a present event” as each human has a role in the crucifixion of Christ and is, in part, responsible for the death of Christ (134). This continues to support earlier notions that place the responsibility of sin on the individual who has dire personal and subjective sins that need be atoned for.

Walsh closes the book examining many elements of the Christian life surrounding issues of faith and love. These words are common among churchgoers and used with relative ease. Yet Walsh unpacks Kierkegaard’s complicated interaction with such subjects and petitions the reader to likewise understand how issues such as faith and love pertain to one’s personal development and existential interests. The Christian “talk” of such concepts often remains vague and abstracted from one’s life. Kierkegaard implores readers to properly appropriate the Christian conception of love, which is universally equal to all people.  He disavows falsified love that establishes or promotes boundaries between people, into their lives.

Walsh readily incorporates a plentiful amount of Kierkegaardian concepts and material into a relatively short book. More advanced readers who possess a more thorough understanding of Kierkegaard may find themselves frustrated with the lack of depth in some sections of the book. Yet, even with this fault, each section of the text builds on the previous one in a manner that indicates clear direction of where the author is headed. While accessible for students and those with a rudimentary understanding of Kierkegaard, readers such as this may have a more difficult time engaging with this text. This is not to discourage the student from reading. This text can be comprehended by the student, but it will require additional concentration and attention (A concise, undergraduate level introductory text can be found in C. Stephen Evans’ Kierkegaard: An Introduction.). In all, I recommend this book to all those interested in Kierkegaard’s philosophy, but additionally implore those interested in the philosophical impact on theology to seriously grapple with this text.