Lead Like It Matters to God: Values-Driven Leadership in a Success-Driven World 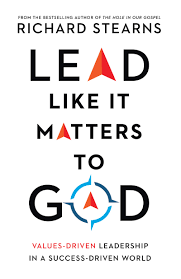 Over the past thirty years, the subject of leadership has become a potent cultural phenomenon. During that time, hundreds of books and thousands of articles, both scholarly and popular, have been published attempting to explain and enhance its practice. Many of these works looked at leadership thru the lens of theory while others sought to explicate its operation on the ground in real time. And Christians, especially evangelicals, were not slow to advance their own views of leadership. In fact, by the early twenty-first century some Christian authors had created enormous platforms by which to advance their perspectives on this ‘oh-so-challenging’ aspect of personal and institutional life.

It’s into this vast sea of literature and opinion that Richard Stearns casts his net on the subject. In Lead Like It Matters to God, he takes something of a counter-cultural approach.  Instead of seeking success by means of building a larger organization, gaining a bigger salary or gathering thousands of followers on Twitter, Stearns makes the case for establishing one’s leadership on the foundation of Biblical teaching.  A quick perusal of much of the leadership literature set forth by Christians and Christian publishers over the last two decades reveals a dearth of focus on godly values. Stearns seeks to correct that all too prevalent oversight in this book.

An overview of the Table of Contents reveals the author’s heart and focus. Some of the twenty chapters which comprise the book are devoted to themes such as surrender, sacrifice, trust, love, humility, integrity, courage, generosity, perseverance, and encouragement. He doesn’t neglect the importance of good leadership skills nor the necessity of vision in moving an organization ahead. But Stearns recognizes that people function best in environments that reflect unity, hard work and mutual respect and it’s the leader’s job to create that kind of culture.

Readers would be wrong to think that Stearns is promoting some sort of pietistic drivel completely untethered from the hard realities of life. His own background as the CEO of two major corporations as well as his twenty-year tenure as the head of World Vision gives him a tremendous amount of credibility when he speaks about ‘values-driven’ leadership. He knows first-hand the pressures that organizational leaders face in a culture where success is the dominant metric of effectiveness. But he argues that ‘God’s design for leadership is radically different from the secular models that so dominate the current landscape and have seeped into churches and ministries as well’ (p. 1). After laying that foundation, Stearns uses the rest of his book to prove and then drive home that very point.

When I first started reading Lead Like It Matters to God, I thought ‘mmm, this is interesting and well written but there’s nothing really new here.’ But as I continued to make my way ahead, each successive chapter built on the prior ones. By the time I was in the middle of the book I was like a teenager with a heart-felt crush. Specifically, it was in Chapter 11 (on Courage) that I came to love this book with both my mind and my heart. There Stearns writes of the AIDS crisis in Africa and the human devastation it wrought and how he took very specific steps to move the World Vision staff and constituency to address the problem. His courage in doing the right thing in the face of indifference, harsh criticism and the potential loss of donors was both inspiring and challenging. His example in this regard shows how leadership can be exercised in a way that really matters to God!

Over the past thirty years I’ve read more than my share of books on leadership. This one ranks at or near the top and I can’t recommend it enough to the readers of The Denver Journal. Anyone interested in leadership or currently leading in some capacity will benefit from the perspective Rich Stearns brings to the subject. I know that his book continues to bless and instruct me in ways that I’m only beginning to recognize.